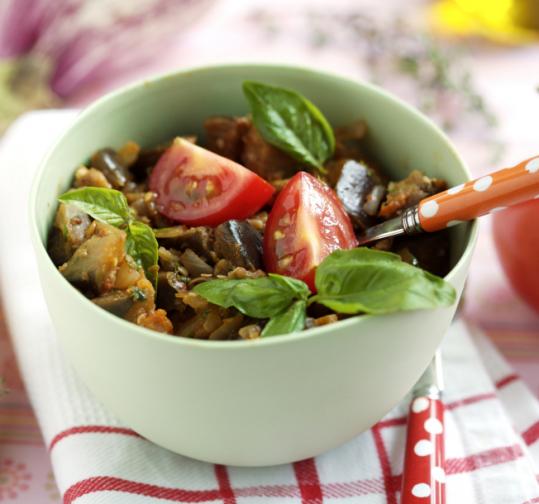 French for "bohemian," the summer dish bohemienne begins with sun-filled tomatoes and ripe eggplant - you might be picking from your own garden if you're lucky - simmered with onions, thyme, and garlic. The dish comes from the south of France, where it's typically served as a side, or a spread on toasted rustic bread. firm eggplants and sprinkle them with coarse sea salt, which softens the flesh so they cook faster and removes any bitter juices. Add the eggplants to softened onions, then add peeled tomatoes. While they cook, crush them with a spoon so the texture resembles a coarse puree. In many ways, bohemienne is similar to ratatouille or caponata, except that bohemienne is an even simpler dish, requiring fewer ingredients and less time behind the stove. Not a bad thing for the summer kitchen.

1. In a colander, place the eggplants and sprinkle with 1 tablespoon of salt. Toss and let rest for 30 minutes.

2. Core the tomatoes. With the tip of a paring knife, make a 1-inch "x" at the bottom of each one. Place the tomatoes in a large heatproof bowl. Pour enough boiling water over them to cover them. Set aside for 10 seconds to loosen the skins. Drain the water. Peel off and discard the skins at the slits. Halve the tomatoes, squeeze the halves till the seeds pop out, and discard the seeds. Coarsely chop the flesh.

3. In a heavy-bottom casserole over medium heat, heat the olive oil. Add the onion and cook, stirring often, for 6 minutes or until it softens without browning. Add the garlic and thyme. Cook for 1 minute more.

4. Add the eggplant and cook, stirring, for 15 minutes. Add the tomatoes and continue cooking, stirring often and crushing the eggplant pieces with the back of a spoon, for 1 hour.

5. Remove the pan from the heat. Discard the thyme. Add pepper and basil. Taste for seasoning and add more salt, if you like.Béatrice Peltre