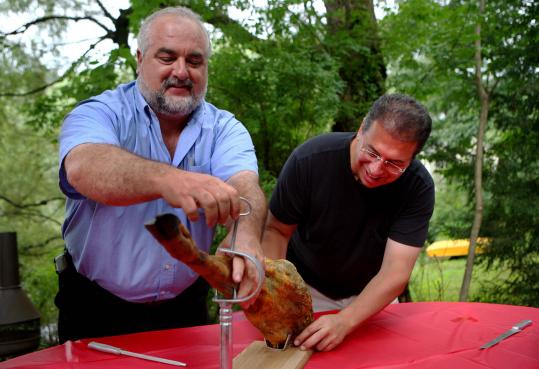 Victor Grillo (right, with Matthew Torti) put his name on a waiting list two years ago to get a jamon iberico. Now that Grillo's ham has arrived, he's throwing a party. (Wendy Maeda/Globe Staff)
By Devra First Globe Staff / August 13, 2008

WAYLAND - This party has been two years in the making. At the home of Frank Cutitta, friends are beginning to gather. Cutitta, a media executive, is in the kitchen, putting the finishing touches on pasta alla carbonara and veal saltimbocca. Outside on a stone patio overlooking a pond, people mill around the guest of honor.

It weighs 13 pounds, glistens with fat, and is capped by a dramatic black hoof.

It's a ham, but not just any ham. This is jamon iberico de bellota, the be-all-and-end-all, Rolls Royce, ne plus ultra of hams: one that positively demands a party. It comes from Spain, and it is among the first whole bellota hams to legally reach this country. Until now, to get a taste of this porcine holy grail, American foodies had to hop a plane.

The ham has arrived in the United States because the Spanish company Embutidos Fermin, located in the medieval village of La Alberca, spent much of the last decade working to meet USDA specifications. The company built a new slaughterhouse and formed a partnership with chef Jose Andres, host of the PBS series "Made in Spain," and Portland, Maine, importers the Rogers Collection. In 2005, they got the green light. The following year jamon iberico began to trickle into the country, first in the form of sausages, then paletas, or shoulders. But the actual hams, which take several years to cure, didn't start shipping to customers till last week.

The ham has arrived in Wayland because Cutitta's friend Victor Grillo, the man behind such ads as the famous Ginsu knife infomercial, heard about it long ago and decided to get his hands on one.

He found out he couldn't. "It was forbidden fruit," he says. "You want what you can't have." When he discovered a waiting list for jamon iberico (pronounced: ham-ON ee-BEAR-ee-ko) started by La Tienda, a website specializing in Spanish products, he put down his name and a $199 deposit.

He was among about 400 people to do so, according to La Tienda owner Don Harris. That was two years ago. Some people have been on the waiting list for as long as six years. Very few of them are in the restaurant business. These are individuals, caught up in pure porky obsession.

"They are ham fanatics," Harris says. "One guy was postponing his wedding till he got one. He has a motorcycle club called the Patas Negras," or "black hooves," another name for the Iberian pigs from which the ham is made. "We had a customer who went and visited his ham in the mountain village where it was being cured."

Jamon iberico's cult following stems in part from its mystique: nearly unattainable, dearly expensive. It retails for $96 a pound and up.

Its provenance adds to that; the ham comes from pigs that are as coddled as the cattle that become Kobe beef. The pigs roam free, feasting on acorns ("bellotas" in Spanish). "They live in pig paradise," says Harris. "They grow up as a gang together for two years, then when it's time for them to meet their maker, they play them Mozart. After Mozart, they go to bed for the night. I don't know if they're tucked in. The next morning they get hot showers, then some mysterious carbon dioxide enters their atmosphere and they go off to piggy heaven." This is referred to not as slaughtering the pigs, but as sacrificing them. The hams then cure for up to four years in clean mountain air.

The piggy spa treatment takes place for a practical reason. "They want them very mellow," Harris says. "If they're scared, they produce epinephrine. If they're not stressed, the meat is fine. I'm not saying the ham people are pig lovers. They're meat lovers."

The main reason bellota ham is so coveted, of course, is its flavor. "It's very meaty, rich, marbled with fat," writes Andres in an e-mail from Spain. "Jamon iberico is the finest ham in the world. It is a ham that will ruin you for other hams." He recommends serving it alone, or topped with caviar and rolled up like a cigar.

The meat is dark red, almost the shade of corned beef. It tastes like prosciutto in Technicolor, nuanced and blossoming in the mouth, with a lingering touch of iron. The fat has faintly fruity undertones; it dissolves on your tongue. Harris says the curing process converts much of the fat of acorn-fed hams into healthy monounsaturated fat, like olive oil that happens to taste like pork. According to the nutrition label on Fermin's website, a 1 ounce serving has 84.5 calories, 51.3 from fat; about a third of that is saturated. So it's not exactly health food, but it does taste extraordinary.

"The operative word for the bellota is 'meaty,' " says Harry Saltzman, the La Tienda customer who went to visit his ham in La Alberca. "Even the fat, which of course my wife assiduously cuts off and I love and I eat when she's not looking. I've been told the acorns give the ham and the fat this rich flavor. It's spectacular. Nobody believes me it's as good as I say."

Saltzman, a retired music professor and conductor who lives in New York, has requested his ham be delivered on the autumnal equinox; his kitchen is too hot in the summer. He and his wife, Barrett Cobb, travel to Spain regularly. They first tried jamon iberico on one of their trips. "We bought some and we were hooked," he says. Five years ago, they signed up on La Tienda's waiting list.

Then, just as they were about to head off on another trip, an e-mail came from La Tienda. "It said 'Do you want to visit your ham?' " Saltzman recalls. "I immediately e-mailed back. We were going right past La Alberca. So we visited the ham. We had to go through a bath for our shoes and put on white robes and shower caps. We got great pictures: me petting a ham, then petting a pig."

When it arrives, they'll have a party, of course. "We'll have to round everyone up," Saltzman says. "My brother and sisters and a few other crazies like me have bought 1 pound chunks of it, which I'll cut for them."

Most of the people getting hams from La Tienda are probably planning festivities around their arrival, says Harris. (Though not the man who postponed his wedding; he and his fiancee have since split up.) "Spain is a very communal society," he says. "You'd have the ham on the kitchen table and people would float by during the day - neighbors, friends, extended family - and cut off thin slices. The ham would last a month or so. In the US, we're not communal types. People don't float through our kitchens. So most people will probably have a big party."

Then, before hanging up the phone, he gleefully announces that he's off to his own jamon iberico party - a ham's packaging was damaged in shipment and they have to do something with it. "There will be dancing, of course," he says. "The sevillana, which is like flamenco but for ordinary people."

You don't have to buy an entire ham to celebrate, however. La Tienda will eventually sell it sliced. "You won't have to mortgage your house to get the ham, though going to a Red Sox game can cost as much as bellota," says Harris, who grew up in Belmont and still makes Fenway pilgrimages.

You can taste jamon iberico de bellota locally, too. Estragon, Toro, and Persephone are among the restaurants that will serve it, and specialty shops such as Formaggio Kitchen and Las Ventas have it in stock.

Back at the Cutitta home, the spread is on the table. Cutitta, who is famous among friends for his cooking, has created a feast based around Grillo's ham. There are slices of jamon iberico de bellota, unadorned; figs topped with the ham, manchego, and Italian honey; skewers of shrimp with ham; mushrooms with ham; the carbonara and the veal ("make sure you say it's from Waverly Market," Cutitta says).

"Isn't it great when food brings people together?" Grillo says. Then he takes his first bite of carbonara, topped with more slivers of jamon and Spanish cheese. "I'm gonna fall over," he says, practically swooning. "Oh my God, this is awesome. This is better than sex."

And with that, it's time for a toast. "Here's to the pig!" Grillo says, raising a glass of Rioja. And together the friends salute the guest of honor.