Little to hear, but a lot to take in 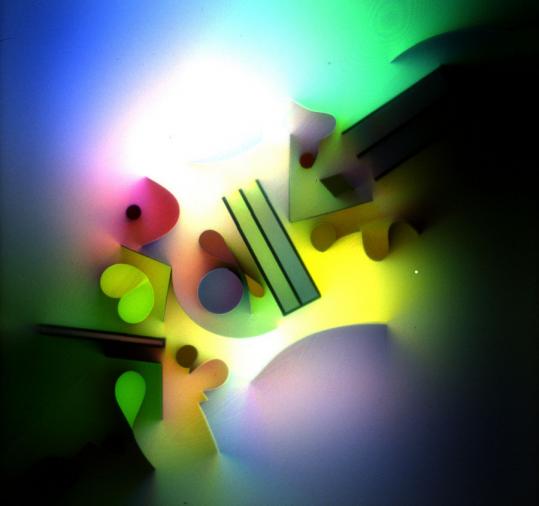 BRUSSELS - There are bearded mannequins with corncob penises, singer Pete Doherty posing as St. Sebastian, and 100 coffins sprouting lemon trees arranged by Yoko Ono. Yet the oddest thing about "It's Not Only Rock 'n' Roll, Baby!" at Bozar in Brussels is the silence.

For a show devoted to artworks by rock musicians there's not much of a soundtrack as you meander through the labyrinthine 1928 Art Deco cultural center, designed by master Belgian architect Victor Horta.

Brian Eno's ambient sounds set the scene for one of his visual works, a slowly varying kaleidoscope of light in a dark chamber decorated with mounds of a brightly colored sand-like substance, tree trunks, and roomy couches.

Entering Fischerspooner's space, you find yourself at the center of a camp neo-disco clip amid spangled dancers and throbbing rainbow colors. An installation by the Kills consists of a bunch of televisions piled on the floor all showing black-and-white images of the indie duo droning.

There's not much more music to be heard. No matter; some of the art in this rambling, entertaining exhibition, curated by Jerome Sans, is worthwhile even for nonfans.

The clusters of colored lights, often intertwined with crosses or other religious images, that Alan Vega of the group Suicide hangs on the walls of the open space devoted to his works create a hushed, chapel-like atmosphere.

Patti Smith's black-and-white photographs of mementos linked to her heroes - Virginia Woolf's bed, a street trod by Rimbaud, Hermann Hesse's typewriter - are delicately shaded as if shot with an early camera. The most striking, though, is a defiantly straightforward self-portrait.

Riceboy Sleeps, an art-and-music duo made up of Jonsi Birgisson of Sigur Rós and Alex Somers of Parachutes, show works combining photos and drawings, often torn and faded, that convey touching nostalgia for a childhood lost.

Doherty offers an art-school take on narcissism, with the Babyshambles singer appearing in just about all of the scrawled and scratched drawings, collages, and photos - often daubed with his blood - that are on display.

Nick Zinner, guitarist with the Yeah Yeah Yeahs, takes carefully composed snapshots of entranced audiences, girlfriends in bland hotel rooms, backstage shenanigans, etc. The pictures might not be original in form yet offer a distanced, documentary view of life on the road from a rock musician's stance, often captured live from the stage.

You have to walk through Yoko's cemetery of coffins and citrus saplings as you enter the exhibition, but don't let that deter you. It might not be lofty art, yet it's highly enjoyable.