Coldplay flexes its muscle in all-out rock show at Garden 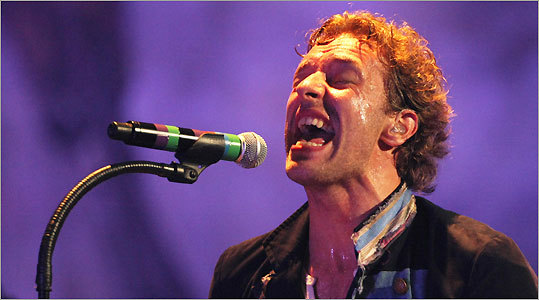 Coldplay closed out the North American leg of its tour with an exclamation point Monday night.

Befitting their status as radio kings, thanks to the success of their fourth album "Viva La Vida," the quartet gave a big performance on a big stage with a big audience singing along to the big choruses. (Speed-dial friends U2 would've beamed with older brotherly pride).

Whether it was the presence of frontman Chris Martin's famous wife, Gwyneth Paltrow, and mother-in-law, Blythe Danner, with special guests Jerry and Jessica Seinfeld at the TD Banknorth Garden or the hero's welcome the band received, the British hitmakers signed off with a giddy, high-energy performance that seemed as much for their own enjoyment as for the hyped-up, sold-out crowd.

While the obsessively self-deprecating Martin joked about being a "soft rock" band, drummer Will Champion - the band's true MVP - gave the entire affair a welcome brawn from the very first downbeat of opener "Life in Technicolor."

Songs such as "Speed of Sound" and "In My Place" that sometimes come across as more placid and pleasant on record leapt off the stage thanks to the mighty efforts of Champion and his similarly uncorked bandmates.

Martin flailed about with his lunatic wobbliness during such stompers as "Viva La Vida" - taut and soaring with timpani and bells - and rocked like a madman behind the piano teasing out the curlicue riffs of "Clocks." In all his gadding about he managed to keep ahold of that valuable falsetto for the night's biggest ballad singalongs including "Fix You" and the inanely simple but irresistible "Yellow." He took it lower for the slithering, Eastern-tinged rhythms of the hypnotic "Yes."

The band took to a smaller lighted stage halfway into the audience for an oddly insular, techno-fied interlude that felt like they were playing in their own tiny nightclub. Large orbs, some which obstructed views, descended, beaming out images to those farther away. More successful was a later two-song acoustic bit way up in the right-hand corner of the arena that included the Beatlesque sing-song gem "The Scientist" and Champion handling vocals on a sweet version of "Death Will Never Conquer."

Those aspiring to be the biggest band in all the land would be wise to heed the example of their oft-name-checked predecessors in one way: Play longer shows. Given that they have four albums of material to choose from, a 90-minute set, as energetic as it was, felt like not enough bang for the sizable soft rock buck.

Santogold put her heart into the groovy, electro-quirk rock of her critically lauded debut but wasn't quite the right fit for the large crowd that showed up early enough to hear the buzzy charms of tunes such as "L.E.S. Artistes" and "Creator." And if you're going to have a hipster-cred building opening act, provide her with a better sound system.

Victors in an online contest, judged ultimately by Coldplay, Boston rockers the Luxury took the stage with confidence for a short set that should draw a few more fans to their gigs around town.