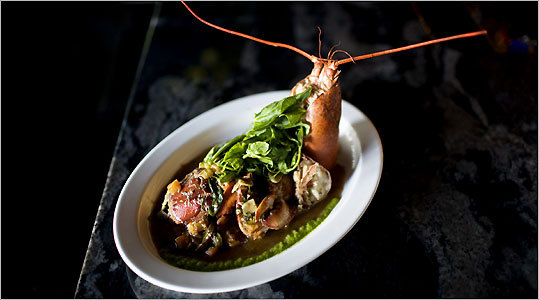 The garlic-pepper lobster is one of Blue Ginger's signature dishes. (Yoon S. Byun/Globe Staff)
Dining Out

The Chilean bass has morphed into eco-friendlier Alaskan butterfish, but these dishes are all still on the menu. The restaurant just underwent a renovation and expansion, and it's nearly doubled in size. It now has three large private rooms, a lounge, and a bar. Although the space looks different, eating in the dining room at Blue Ginger today tastes a lot like eating there 10 years ago.

There's an argument to be made for preserving the classics, and regulars might riot if their favorites were dispensed with. But these dishes no longer surprise the way they used to. Asian fusion has become part of the culinary idiom, in part because Tsai put it on TV with shows such as "East Meets West" and "Simply Ming." (Unlike many television chefs, however, Tsai can still frequently be spotted in-house.) It's not cutting edge anymore. It's just part of the way we eat.

The pairing of Mom's famous three vinegar shrimp, a Chinese-inspired stir-fry, with mashed potatoes no longer feels outre. Instead, it feels heavy. The mashed potatoes are delicious, but unless you've spent the day skiing, you might be just as glad to find rice beneath the shrimp. These are served in a brown sauce - visually, the dish is unrelentingly brown - that is zingy and incredibly flavorful. It hits your tongue like a Mack truck; after a few bites from the heaping plateful, your taste buds begin to grow weary. Less sauce would let the freshness and flavors of the shrimp and vegetables shine, something palates 10 years older and wiser have come to desire.

Several appetizers are also studies in brown, such as maitake mushrooms with truffled Parmesan flan. As lush as it sounds, the mushrooms are on the dry side, the custard too delicately flavored. The plate cries out for some greens, some herbs, a spot of color somewhere. The foie gras-shiitake shumai are similarly monochromatic, but in the mouth they're kaleidoscopic. The dumplings come dim sum style in a steamer; to eat them you swish them through a bowl of sauternes-shallot broth, deep brown with caramelized flavors. Neither element quite works on its own, but together they're perfect, though the shumai could be more tender.

Another excellent appetizer is the tuna poke, a crudo inspired by the Hawaiian dish (pronounced "po-keh"). The chunks of raw fish are fashioned into a round, sandwiched with a crispy cake of sushi rice, seaweed, and cress. It's a tone poem of flavors and textures; the last bite is as good as the first, and then you want more.

But pea soup with shrimp shumai doesn't taste as springy as it should, its flavor more cooked, shelled peas than crunchy pods. Like Mom's shrimp, it's a whole lot of one taste, until you bite into the peppercorns scattered on top. They add needed dimension. The soup is very thick, and it comes with one lonely dumpling; this time the dish is monochromatically green (someone get Jules Olitski out of the kitchen).

Blue Ginger is the rare restaurant where overall the entrees are more interesting than the appetizers. The sake-miso butterfish is a Blue Ginger classic for a reason. The fish is light and moist and, indeed, buttery, the white flesh charred black in spots, sweet from the miso marinade. On top, wasabi-tinged roe break up that sweetness, popping in the mouth and releasing their salt. Seaweed salad and chopped pickled ginger bring in more flavors. But the best part is the soba sushi, soba noodles wrapped in nori. The flavors are clean and gentle, and in such harmony it's hard to dissect them. Like the tuna poke, it gets better with each bite. Instead of a monochromatic canvas, the plate here is a jumbled pastiche of colors, drizzles, and sauce blobs (is Jackson Pollock back there, too?).

Blue Ginger is also known for its garlic-pepper lobster, and it's easy to see why. It's Tsai-style luxury dining. The lobster carapace stands at attention, stuffed with lemongrass fried rice, its meat removed and laid out before it. Bright green pea tendril salad cuts through the butter coating the lobster. The dish is rich, with a price tag to match ($42).

The dining room menu also includes an excellent kurobuta pork chop, a new dish. It's tender and a bit pink in the middle, served with cherry sauce and a frisee-radish slaw in bacon vinaigrette. But what really feels new at Blue Ginger is the lounge menu. The dishes are smaller, lighter, brighter in flavor. They are more playful than the dishes on the dining room menu. It's as if instead of opening a second, more casual restaurant, Tsai simply incorporated it into the original. If I lived in Wellesley, I might get to Blue Ginger proper once a year; I'd be a regular at the lounge for drinks and snacks. (Plus, you can also order off the regular menu in the lounge.)

The signature offering here is "Ming's Bings" (you have to appreciate a chef who can't resist a rhyme). These are sort of like Chinese Hot Pockets - round, slider-size, dumpling-esque skins stuffed with meat and cooked on a special griddle. They come in four flavors: traditional ginger pork and scallion, blue cheeseburger and bacon, roast duck, and mushroom-tofu. You choose a trio. The dish could also be called Grease Three Ways, and I mean this in the nicest possible, good-bar-snack way. When you bite into a bing, hot liquid spurts out the other end, and each filling offers a different, delicious, umami-filled experience.

Also fun are the shrimp sticks, long cigarettes of fried dough filled with shrimp, like stretched-out spring rolls without any unnecessary ingredients. You dip them in an oniony mango sauce. Asian gazpacho is refreshing, peppered with chunks of avocado and jicama and garnished with floating shrimp toasts. And then there are chicken shumai in hot and sour soup, the mischievous younger sibling of the main menu's foie gras shumai. It's the same concept - submerge dumpling in broth, bite - but where the shallot broth is serious, the hot and sour soup is kicky. It's like a strong tom yum - again, too much on its own but perfect with the shumai.

A sesame ice cream sandwich available for dessert in the lounge sounds like a better time than it is; it tastes a bit like tahini and suffers from the age-old problem of ice cream sandwiches. It's hard to get cookies and ice cream both at perfectly edible temperatures at the same time. At any rate, dessert is one area where the dining room menu out-funs the lounge's. Coconut doughnuts are fried Munchkins of sugary dough served with creamy pineapple curd, kiwi-pineapple salsa, and refreshing lime leaf-kiwi sorbet adorned with a dehydrated pineapple slice that looks like a sunburst. It's not too sweet, and it feels original.

chefs, like rock stars, can find themselves in a strange position: Having become known for something, they are doomed to keep repeating it. It's hard to believe the Stones relish playing "Satisfaction" after all this time, but they still have to trot it out live for the fans. Blue Ginger's lounge menu is like Tsai's new album. The dining room dishes may be his bread and butterfish, but it was time for some fresh material. There's something to be said for classic. There's also something to be said for change.