For those looking to save, prices are right at Ocean State 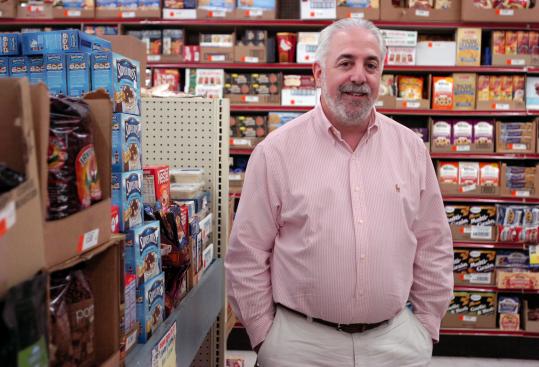 NORWOOD - If you push your cart past the garden hoses, lamps, and Oriental rugs, past shelves of picture frames and then paper goods, you'll end up in an unusual slice of foodie heaven. But this isn't an ordinary shopping experience. You may not get what you came for, but neither do you have to buy the extra-large sizes available at places like Costco or BJ's. And you don't need a membership.

Ocean State Job Lot offers some of the lowest prices around - on pasta, tomato sauce, grains, vinegar, oils, cookies, jams, chocolate, and other shelf-stable items. Shopping here is for the thrifty, the curious, and those who savor the hunt. But it's not necessarily the moment to stick to your shopping list. Some products, such as olive oil, salad dressings, spices, cereal, and tea, are always in stock; others are hit or miss. If you're willing to try different brand names, you can fill your pantry. What's guaranteed is that you'll walk out with more than you came in for.

"We're basically about value," says Alan Perlman, co-owner of the 85-store Rhode Island-based chain. Rising food and gas prices make Ocean State a place to save money on grocery bills. Where some people used to cruise the aisles of the store for the sport, customers are shopping for bargains more seriously now.

Walk down the aisles, and you may be surprised by the quality of the goods: shelves of Danish cookies, Belgian chocolates, Swiss and German jams, a special deal on Droste chocolate pastilles, or a great price on Newman's Own Marinara. Sixteen-ounce jars of Giuliano roasted peppers and golden peperoncini look pretty good at $2 and $1.70, respectively. So does De Cecco linguine at $1 per box (usually $2.29 at supermarkets) and Nonni's biscotti for $2.80 (versus $3.29). Ocean State also sells brands you see at Whole Foods Markets and Trader Joe's, such as Bob's Red Mill grains, milled flours, granola, and soup and baking mixes.

When you get to the check-out stand with an overloaded cart (one that also holds a flashlight, shampoo, and an electric fan you've been meaning to buy), you'll find it's the lowest tab you've seen in months.

Sonja Barr of Coventry, R.I., shops at Ocean State about once a month. "The prices are good and the quality is good," she says. In fact, Barr considers her trips here an adventure. "You can find new things from one month to the next."

Food, which accounts for about 16 percent of sales, is the largest single category and growing, says Alan Perlman. Every store gets the same mix of products, but what's on the shelves can differ based on how quickly the merchandise turns. On the Cape, for example, food flies out of the six stores all summer long, so managers keep them well stocked.

It's the combination of opportunistic and big-volume buying that gives Ocean State an edge. "We started out as a closeout operation," says Perlman. In the retail industry, closeouts are discontinued products, which can result from packaging changes or an advertised promotion that's no longer offered (as on boxes of cereal). There are other ways to come by goods. Occasionally, overruns and canceled orders leave a manufacturer with too much product. In all those scenarios, Ocean State buys truckloads of the goods at bargain prices - usually direct from the manufacturers or importers - and, in turn, sells them cheaply.

Recently, for example, Newman's Own reduced the size of its tomato sauce jars from 25.5 ounces to 24 (rather than raise prices, manufacturers often reduce product weight). Perlman bought up the discontinued sizes, offering them for $2 each. The new 24-ounce jars sell for $2.69 in the supermarket.

Another type of closeout is a product that is close-dated. Ocean State is interested in these products, but anything at its "sell-by" date is pulled off shelves and donated to the Rhode Island Food Bank. "They determine if the foods are safe to distribute," says Perlman.

The Perlmans' power buying brings customers great deals, but not necessarily consistency or a wide range of foods. Alan Perlman explains that what supermarkets and other stores such as are offering is variety and depth. But they don't have much flexibility, he adds. "We can move in and out of products because we haven't devoted shelf space to them.

"If we can't find it at the right price, we don't carry it," says the retailer. That means making some hard choices. He has never seen the increases in food prices he's seeing now. Products like maple syrup will eventually reach too high a price for Ocean State customers. To give them another option for their pancakes, however, Perlman has brought in lower-cost alternatives such as berry-flavored syrups.

When the Perlmans started more than 30 years ago, discount retailing wasn't a new concept. But because they didn't have a traditional retail background, says Perlman, "we had no preconceived ideas or set way of doing business."

Today the hodgepodge is the main attraction. And it's priced to sell.