Journey to the center of a cult 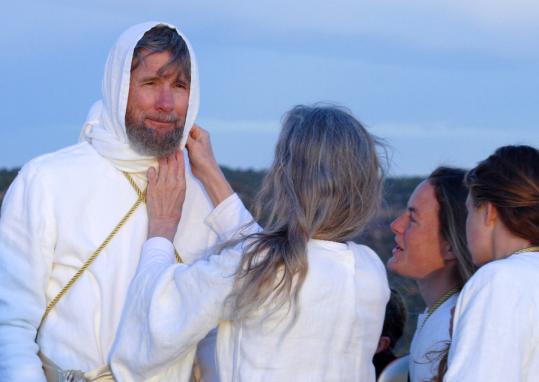 I kept looking deep into the eyes of the members of Strong City, a New Mexico cult led by a man who claims to be "the embodiment of God." Would I see a profound hunger for existential truth, the philosophical longing of 1960s acid casualties, hints of the commune that T.C. Boyle portrayed in his novel "Drop City"? Would I see steel clockwork and springs, the cold innards of 1950s movie robots?

During "Inside a Cult," tonight at 10 on National Geographic Channel, I kept looking, and I saw nothing.

The fascinating hour, part of the channel's "Inside" documentary series, gives us 50-plus hollow followers, many of whom appear to be quite hypnotized. These people have given up their money, worldly possessions, and, in a few cases, the monogamy of their wives, to wait for the end of the world with a self-styled divinity named Michael Travesser. Like empty vessels, they slavishly enact the whims of Travesser, seduced into docility by his promise that a glorious Judgment Day will arrive. He has God on his side, he assures them.

Travesser granted National Geographic full filming access, to help get his cult's apocalyptic message to the public. We tour Strong City's glorious location, and we get to see Travesser explain his beliefs to the camera. Based on his screen presence, it's hard to detect much of the charisma generally associated with religious leaders.

Some of the cultists are kids, which makes this hour particularly timely. While there are many differences between Strong City and the Fundamentalist Church of Jesus Christ of Latter Day Saints polygamist ranch in Texas, now in chaos amid charges of child abuse, the movie does give us a bracing close-up of the vulnerability and impressionability of children raised in such extreme situations. The Strong City kids have been indoctrinated to look forward to their demise, and they are fully prepared to lose their lives before they've barely begun. "We weren't made to live on this earth away from Father," says one emotional teenage cult member to another. "It's just going to be awesome to leave this world behind."

Removing the children from Strong City - which happens to a few kids during the course of "Inside a Cult" - does not solve their psychological dependence on the people who have raised them. Two children sent back to their mother outside the cult go on starvation diets until she feels she must allow them to return. Ultimately, "Inside a Cult" could have been two hours long. It quickly looks back at cult disasters involving Jim Jones and David Koresh and interviews cult experts, who talk about brainwashing techniques. But it does not have the time to explore the complex considerations - ethical and emotional - involved in dealing with cult children.

The documentary chronicles a number of sexually inappropriate incidents at Strong City, but with none of the forced drama of a network news magazine. Travesser is a former Seventh-day Adventist preacher who had a revelation in 2000. "One day I was in my trailer just relaxing, and there was nothing on my mind in particular, and then God said to me, 'You are the messiah,' " Travesser recalls. Two women simultaneously designated themselves as his witnesses, left their families, and sit by him throughout "Inside a Cult" serving as a personal harem of sorts. Travesser has also had a sexual relationship with his son's wife, leaving his devoted son to struggle with his earthly feelings. Also, Travesser has lain in bed with a number of young female virgins in Strong City, incidents that Travesser superciliously likens to a doctor touching a patient.

For seven months, the filmmakers watched Strong City prepare for Oct. 31, 2007, which Travesser had named as Judgment Day. When the date finally arrived, the cameras were banned from the compound, but they did catch the Strong City cult members marching on the public road at night, joyfully yelling "liberty." The world didn't end, of course, but neither did the cultists' belief in Travesser. Reason didn't get them into Strong City, and it certainly wasn't going to drive them out.