A master performance, decades in the making 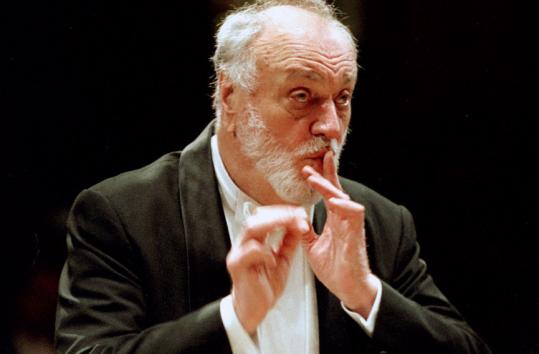 After 60 professional years, most of Kurt Masur's resume has collected honorifics. Conductor laureate of the Leipzig Gewandhaus Orchestra and music director emeritus of the New York Philharmonic, Masur will add another in the fall: honorary music director for life of the Orchestre National de France - but not before one last tour as music director proper, which brought orchestra and conductor to Symphony Hall on Sunday afternoon.

The program contrasted youth and maturity - the former courtesy of Beethoven's Piano Concerto in B-flat, published as No. 2 but written first, originally a vehicle for the composer-pianist as he embarked on his career. Like the piece, the performance recalled the grace of Mozart and Haydn, with light articulation and an orchestral transparence that nevertheless remained true to the group's idiosyncratic sound: dark, rustling strings; pointed winds; warm, buzzing brass.

The young French pianist David Fray - his lanky frame flopped in a chair and hunched over the keyboard in the Gouldian manner - eschewed Beethovenian thunder in favor of a preternatural elegance, infinite gradations of pearly touch. It could have been merely precious, but Fray's rhythmic clarity, absolutely even passagework, and intelligent discernment produced a beguiling refinement, hinting at untapped power. For once, the highlight wasn't virtuosic fireworks, but the extraordinary finale to the slow movement, Fray's daringly hushed, crystalline soliloquies melting into a distant wash of strings.

Tchaikovsky's Fifth Symphony was composed concurrently with an overture to "Hamlet." The Dane's legendary indecisiveness was contagious; even after finishing the symphony, Tchaikovsky continued to second-guess himself, calling it "too colorful, massive, insincere, drawn out." In an august reading, Masur emphasized the first two of those to disprove the others, giving free, sustained rein to the orchestra's ombrous tone; every note, melody or accompaniment, had prominent weight and shape. Shorn of sentimentality - even the third-movement waltz had a serious gravity - the symphony proved deeply sincere indeed. (An encore, the waltz from Tchaikovsky's "Serenade for Strings," was more playful, stretching the rhythm to expansively coy extents.)

For all his reputation as a taskmaster, Masur is unfussy in performance, understated and efficient. There are hints of his 80 years - tremors in his hands, stiffness in his posture - but Masur remains a vital podium presence, a focal point to coalesce and project the orchestra's energies. The concert bore the unmistakable stamp of his belief in the essential, humanizing nobility of music-making. That never gets old.