Coffee beans led to a Beantown victory for Ken Oringer.

"You're a neighbor of the Green Monster," remarked The Chairman, the show's host. "But are you ready for the white heat of Kitchen Stadium?"

With five restaurants, what does the local mega-chef Oringer (of Clio and Toro, among others) have left to do? Go to this histrionic playing field, where culinary goliaths battle to the melodramatic finish each week.

The Kitchen Stadium is actually the television set of "Iron Chef America," broadcast on the Food Network. On Sunday night's show, Oringer battled Southern belle Cat Cora and led his three-man home team to a sound victory by creating four savory courses and two desserts based on the secret theme-ingredient coffee.

"There's not much downtime in a restaurant kitchen, so finding the space to train for this was pretty crazy," says Oringer. "But the key to winning was to come up with a coach's playbook. We had lists of different recipes we could adapt, depending on what the secret ingredient could have been."

While both chefs grabbed points from the judges for their originality and presentation, ultimately it was Oringer's seamless blend of traditional techniques with a judicious application of molecular gastronomy, his knowledge of world cuisine, and a subtle hand with flavor combinations that pushed him to victory. With highly successful French, Japanese, Spanish, and Mexican restaurants under his belt (and a new steak house), Oringer made no apologies in using this training to his advantage.

This was his take on breakfast: An egg soft-cooked in a computer-controlled 145-degree water bath that was gently cracked over coffee-infused trumpet royale mushrooms and a parsley root purée, and topped with a Spanish jamon-flavored foam. A dollop of Périgord black truffle vinaigrette and caramelized Indian-spiced brioche dusted with ground coffee completed the breakfast theme.

"All I need now is the morning paper," quipped guest judge Ted Allen.

In globe-trotting another dish, a Mexican mole of raw coffee and pumpkin seeds was paired with a venison loin cooked slowly in espresso oil in the manner of a French confit, and served with a fragrant Japanese cypress box filled with matsutake mushroom and coffee consommé.

"Obviously, my friend, you have a talent that is not easy to come by," raved guest judge chef Art Smith about a ridiculously rich-looking "cappuccino" of pig's trotter, black truffle, and celery root.

Equally hard to come by is a pastry chef who uses balloons and liquid nitrogen to create coffee and chocolate "geodes." But former Clio pastry chef Rick Billings (currently executive pastry chef at L'Atelier de Joel Robuchon in Manhattan) helped ensure victory with his space-age party trick. Served with hazelnut ice cream and a dusting of fennel pollen, it most resembled a dinosaur egg that broke open to reveal a crystallized chocolate center.

One can only speculate on what dessert would have been had the secret ingredient turned out to be flank steak.

In contrast, Cora's take on breakfast seemed positively conventional. A sunny-side-up egg yolk placed on top of a round of toasted brioche with a bit of crispy coffee-rubbed bacon, smashed banana, and red-eye gravy. While the flavors were hard to argue with, it amounted to not much more than a vertically stacked Southern breakfast.

All of the dishes Oringer created on the TV show will be featured on the menus at Clio, Toro, and KO Prime. If the Food Network's cable version of dishes is like a typical diner-style drip brew, tasting the real thing at Oringer's restaurants must be like a double shot of espresso. That is, for those willing to pay for it. 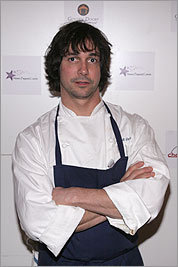