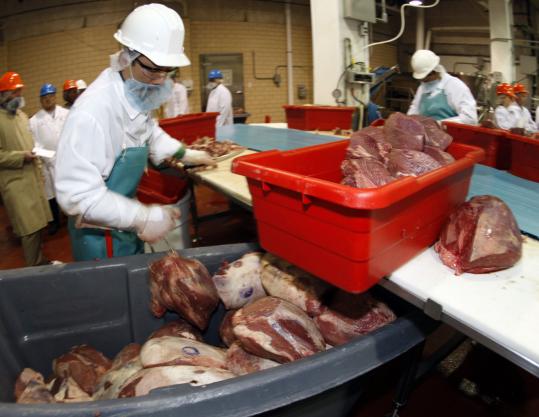 The cost of growing corn and rising prices for other crops such as soybeans may lead to US farmers planting 8 percent fewer acres of corn this year, likely driving the cost of animal feed and ethanol higher. (David Zalubowski/Associated Press)
Associated Press / April 1, 2008

WASHINGTON - Farmers are expected to plant less corn this year, which could mean continuing higher costs for consumers at the grocery store.

Corn prices have skyrocketed in recent years, helped by the burgeoning ethanol industry, which turns the crop into fuel, and rising worldwide demand for food. The higher prices have hurt poultry, beef, and pork companies, who use corn to feed their animals.

US farmers are expected to plant 86 million acres of corn this year, the Department of Agriculture predicted yesterday, down 8 percent from 2007, when the amount of corn planted was the highest since World War II. The decreased supply could drive corn prices even higher - a cost for food producers that could be passed on to consumers.

According to the Agriculture Department, corn planting is expected to remain at historically high levels but could be down this year because of the high expense of growing corn and favorable prices for other crops, such as soybeans.

Though the ethanol industry is heavily subsidized and has contributed to the rise in prices, a decrease in corn production could hurt that business, too. Higher prices for the crop could be passed on to those filling their cars up with the renewable fuel.

The number of ethanol facilities has increased from 50 in 1999 to 134 now with more being built, according to the Renewable Fuels Association. An average, 100 million-gallon-per-year ethanol plant consumes about 33 million bushels of corn.

The Department of Agriculture report is based on sample surveys of 86,000 farm operators in the first two weeks of March.

Terry Francl, a senior economist for the American Farm Bureau Federation, yesterday predicted corn prices will continue to rise - possibly to $6 a bushel, around three times the price in 2005 - but says consumers shouldn't panic just yet.

Many farmers will take a look at the report and decide to plant corn instead of other crops, he said, and weather conditions could also change things.

"We're going to have to wait until we go through the spring planting season," he said.