You can't beat our pizza 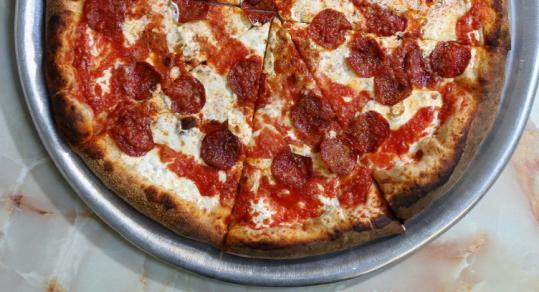 NEW YORK - I am in love with New York food (that's why I constantly write about it on seriouseats.com and edlevineeats.com), positively besotted if you really want to know - and with good reason. New York is the greatest food city in the world, and that will still be true the day after this year's Super Bowl, even if our beloved Giants lose. Is this just an illogical extension of home team pride? Absolutely not. Let me try to back up this out-sized claim.

Food, like everything else about New York, comes from three populations that have settled here in greater numbers than any other city in the world: immigrants, chefs, and skilled food artisans. The immigrants, starting with the Eastern European Jews and the Italians, came though Ellis Island in record numbers in the late 19th and early 20th centuries, bringing a desire to put down roots of all kinds, including those of the culinary variety.

Italians and Eastern European Jews provided foods that New York is now known for throughout the world. Take pizza, for example. New York has become the pizza capital of the world. Gennaro Lombardi opened the first pizzeria in 1905 on Spring Street on what is now the outskirts of one of New York's Little Italies. More than 100 years later Lombardi's Pizza is still turning out fine pies from a coal-fired brick oven across the street from its original spot.

Nowhere else can pizza lovers find the breadth and depth of styles they can find here - from Lombardi's and other coal-fired standard bearers like Totonno's in Coney Island, to the classic slices gilded with buffalo mozzarella by 70-year-old Domenico DeMarco at DiFara, to the wood-fired, Neapolitan-inspired beauties with cheese and tomatoes that young pizzaiola Anthony Mangieri makes at Una Pizza Napoletana. Mangieri's cloud-like pies, crisp on the outside, tender inside, are markedly superior to any similar style pizza you find in Italy these days.

Eastern European Jews brought us the holy trinity of pastrami, bagels, and smoked fish. New Yorkers of every ethnic persuasion have waited in line to get one of the incomparable pastrami sandwiches sliced by hand at Katz's Deli by a veritable United Nations of counter workers.

Down the street at Russ & Daughters, Mark Federman, his daugher Niki, his nephew Josh, and a Puerto Rican whom writer Calvin Trillin has named "Herman the artistic slicer," are the third generation of the extended family to dispense equal amounts of Nova Scotia salmon and life advice.

What makes these food subcultures so interesting is how dynamic they are. In the last month a beloved New York institution, the Second Avenue Deli, has reopened (albeit not on Second Avenue) serving the same great pastrami, French fries, and mushroom barley soup while also adding new menu items and a full bar. And even at the decidedly undeli-like Gramercy Tavern, a killer plate of house-made pastrami may actually improve on the original.

Sandwiches are a great example of the dynamic, ever-changing foodscape. One can still get the world's best roast pork and fresh mozzarella sandwich in the shadow of Shea Stadium at Leo's Latticini. At the same time, a sublime mixed Italian cold-cut hero with house-made salumi is offered at Salumeria Biellese, catty-corner to Madison Square Garden, where chefs from fancy-pants restaurants custom-order sausages. At Nicky's Vietnamese Sandwiches, you'll find banh mi, a specialty of a more recent immigrant group.

New York's foodscape is much like the residents of this town and the city itself: full of heart, soul, character, passion, and generosity of spirit. And that will be true no matter who wins the Super Bowl.

Ed Levine is the author of many books, including "Pizza: A Slice of Heaven," and "The Young Man and the Sea," written with Dave Pasternack.