Demand and prices rise for organic food, but supply falls 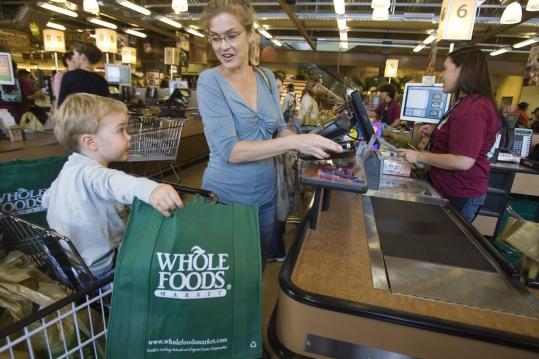 US sales of organic food rose 21 percent in 2006, but it only makes up about 3 percent of the overall food market, a share that has increased every year for the past decade. (Damian Dovarganes/Associated Press/File 2007)
Associated Press / January 30, 2008

NEW YORK - True lovers of organic food have always been willing to pay more for it: They spend $3.99 on a half gallon of organic milk when a whole gallon of conventional milk is $1 less. But that devotion may soon be tested.

The forces that have driven grocery prices up sharply over the past year - growing demand for food in China and a global biofuels boom - have had an impact on the organic food market as well. Meanwhile, US farmers haven't kept pace with demand for organic food, sales of which shot up 21 percent in 2006, and that has also sent prices soaring.

And supplies of organic soybeans and grains are squeezed - not only are they needed for human consumption, they serve as feed for the animals that will be sent to market as certified organic beef, chicken, and pork.

"The organic community has suffered, and enjoyed, a wonderful explosion in demand of 20 percent per year for basic raw materials, but when you look at supply in the US, we're lucky if it's growing at 1 percent per year," said Lynn Clarkson, president of Clarkson Grain Co., a grain-handling business based in Cerro Gordo, Ill.

The organic market makes up nearly 3 percent of the overall food market, a share that has increased every year for the past decade. It's a small but fast-growing segment of an otherwise sluggish food industry.

But while the farmland dedicated to organic crops has expanded, it still makes up just a sliver of the nation's total: a half percent each of all cropland and pastureland in 2005, according to the latest statistics from the Department of Agriculture.

"We know we are not meeting demand with domestic supply," said Caren Wilcox, head of the Organic Trade Association.

One reason for the lagging supply is the fact that it takes a minimum of three years to transition cropland farmed conventionally to an organic operation.

The Martenses say their farm supplies about three-quarters of the state's organic dairy farmers with soybeans and corn. They've witnessed the supply crunch firsthand: An influx of livestock farmers into the market has helped push prices up sharply - a blessing for grain farmers like them, but a curse for the meat and dairy producers, particularly those small dairy farmers who sell to major organic milk brands under long-term contract.

Organic corn that sold for about $200 a ton last fall now commands about $500 a ton - where it can be found, said Mary-Howell Martens.