Shiki homes in on varied tastes of Japan 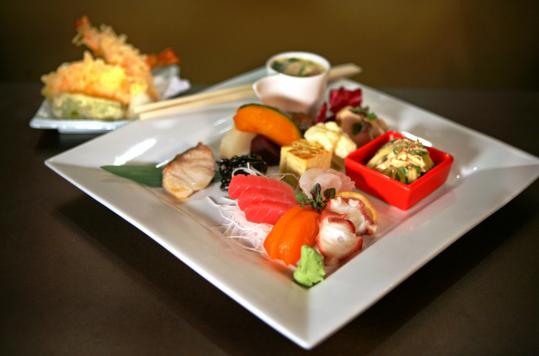 Sushi is everywhere. You can get it at the supermarket. Small children request it for dinner. It may only be a matter of time till the McMaki hits the market. But there's so much more to Japanese cuisine: feather-light custards chockablock with seafood, cutlets in crunchy panko coatings, fish dishes both homey (cod broiled in a miso sauce) and delicate (teeny tiny sardines with eyes no bigger than pin pricks, served over raw grated radish). A wonderful place to explore these options is Shiki, a cheery, yellow-and-rust-painted basement space on a side street in Coolidge Corner. And not to worry - it has sushi, too.

If one of the basic tenets of finding good food from other countries is "go where the native language is spoken," when you enter Shiki you'll know you're in the right spot. On a recent Thursday night, a few people are seated at the minuscule bar, and tables are occupied by groups of friends; everyone is in high spirits, and nearly everyone is speaking Japanese. The people next to us open a foil package and a cloud of steam wafts out along with the enticing smell of fish and vegetables; the Sapporo is flowing. Staff members chat with customers in Japanese, exchanging bows. It's an awfully long flight to Osaka, where husband-and-wife owners Yoshio and Misako Uda (they formerly ran Roka in Cambridge) are from; it's nice to have a real Japanese neighborhood restaurant right here.

Most of the lengthy menu consists of small plates, though there are a few noodle entrees and a list of sushi options. On an initial visit, the array is mind-boggling: How to choose among the 60-plus offerings? Just jump in and pick a few - two to three plates per person is about right - and accept that you're going to have to come back. (The sake list is similarly encyclopedic, but you can opt for the small glasses approach - a sampler lets you try four kinds, served on a beautiful but unwieldy lacquered tray.)

Some of the food here is familiar - seaweed salad, for example, a dish that's mysteriously the same in almost every restaurant. On the other hand, there's an avocado salad that consists of cubed avocado, crab, and cucumbers bound together with a generous amount of mayonnaise, then sprinkled with fish eggs. It's like a Japanese version of 1950s gourmet cooking.

The Japanese fondness for slimy food is manifest. Many dishes make use of nagaimo and yamaimo, potatoes with an okra-like ooze. They show up in tuna tartare, in soba, and as rounds stacked with pieces of broiled sea eel. Increasing the textural qualities of this eel "mille-feuille" is a poached egg on top - the flavors of the dish are good, but it's difficult to eat without toppling the tower. Okra, too, is on the menu, as is natto, the sticky fermented soybeans that are controversial as a taste treat even in Japan.

For those who aren't fans of okra and its ilk, these textures are easily avoided. In fact, you could come to Shiki, dine on nothing but fried morsels, and leave stuffed and happy. The frying here is expertly done, light and virtually greaseless. Age dofu is a little bowl of silky, fresh tofu cubes, dusted in potato starch and fried. They're soft and pillowy, a completely different substance than the pre-fried tofu you find so often in restaurant curries and stir-fries, which is heavy as a soy rock. These cubes are topped with sliced scallion, grated ginger, and bonito flakes; they're served in a sweetish, deep brown broth with tiny mushrooms floating in it.

Shiki also offers tonkatsu, tender pork cutlets breaded in panko then deep-fried and served on a doily with a nice little mesclun salad; unlike many restaurants' small plates, Shiki's are often complete mini meals including a salad or vegetables.

Then again, you could avoid the slimy and the fried and still have plenty of choices. Chawanmushi, a creamy custard served in a pretty black pottery cup, contains hidden surprises: bites of eel, scallops, fish paste, shrimp, and mushrooms. It's a lovely way to start the meal. So is the refreshing halibut carpaccio, thin slices of raw fish treated with olive oil and lemony yuzu juice.

The noodle dish nabeyaki udon is supper for a cold winter night - a big bowl of fat noodles in flavorful broth, with vegetables, fish paste, egg, and shrimp tempura. And that steaming packet at the table next to us is foil yaki, a hobo pack of shrimp, Japanese eggplant, kabocha, and more.

But one of the best things at Shiki is also one of the simplest: rice, the building block of Japanese cuisine. It's the centerpiece of the comfort foods onigiri and ochazuke. The former are warm rice balls filled with your choice of spicy orange cod roe, flaky salmon, tart plum, or bonito, then wrapped in toasted seaweed. Of the latter, the plum ochazuke is my favorite: perfect white rice, slightly sweet, topped with a leaf of the herb shiso ("perilla" in English), shreds of nori, and plum paste. A blob of wasabi is placed on the side of the bowl for sinus clearing, and tiny round rice crackers are sprinkled around the rice. The waitress brings a white teapot of mild broth with a whiff of campfire to it, and you pour it over the rice and slurp. It's soothing, complex, and clean, the perfect note to end a meal on.

Which is good, because when we were there, Shiki was out of its two most interesting desserts, a green tea chiffon cake and a sweet potato pie; they were also out of the intriguingly named "Poached Egg Chicken Jello Sauce" and the washugyu beef steak, "a new taste from Japan" - a cross between wagyu and black Angus. With 60-plus items, it's hard to keep everything in stock. (There is, however, espresso, now apparently a mandatory menu item for restaurants of every ilk.)

At $20, the washugyu is much more expensive than any of the other small plates, most of which fall in the $4-$8 range. For lunch, Shiki offers five different levels of kaiseki, the elaborate, multi-dish traditional cooking. The sets start at $10 and go up to $16; the most expensive one, the tsubaki ("camellia"), includes salad, soup, chawanmushi, tempura, a large platter of sashimi and other small bites, and a bowl of rice. It's an astounding amount of beautiful food for the price. Shiki is a steal, offered artfully. Oh, and the sushi's not bad either.