Bony stew sticks to your ribs 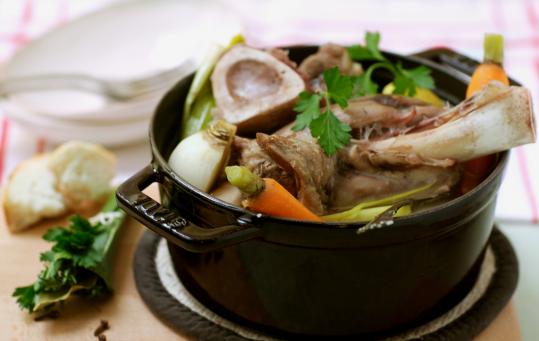 Pot au feu (literally "pot on the fire") has always been popular in France. In some version or another, this hearty dish has been served for centuries, even in the poorest farmhouses.

Today, preparing a meal that requires spending a large part of your day at home while something simmers may not attract many cooks. Yet the unpretentious, bony stew of boiled meats and vegetables remains the perfect brasserie comfort food.

To make a pot au feu, a variety of meats and many root vegetables are cooked together until everything in the pot is fork tender. Purists favor beef as the main meat to use, balancing the dish with a gelatinous cut such as beef shank; a meaty one, such as short ribs or rump; and big pieces of bone, which are used for their rich marrow. A pot au feu is a complete meal. At the table, diners start with a bowl of the concentrated broth accompanied by marrow spread on slices of toasted baguette, then salted. A second course consists of the different meats and vegetables arranged on a large platter, and served as the main course with mayonnaise, mustard, and horseradish.

Traditionally, pot au feu is cooked in a large stockpot in which the meats simmer for a couple of hours before wintry vegetables such as carrots, leeks, turnips, celeriac, and potatoes are added and cooked longer. Finally bone marrow goes into the pot near the end.

The secret to a perfect, clear, highly flavored broth is never letting it boil; it should only bubble at a bare simmer. Flavor the pot with a bouquet garni (a bay leaf, parsley stems, and thyme tied together with leek), onions studded with whole cloves, and sometimes garlic.

At Pot au Feu in Providence, where owner Bob Burke has made his signature dish for more than 20 years, waiters tell customers about sipping the broth first, then eating the meats and vegetables. "I like the idea of making a traditional pot au feu," he says, "using the same recipe that has been successful for years. There is a real structure in the flavors, with each ingredient playing a role."

Contemporary pot au feu presentations might include chicken, veal, pork, even fish. In a Provençal version, popular in the south of France, white wine intensifies the flavor of the dish. French-born chef Gérard Lopez of The Elephant Walk says that his mother's pot au feu always includes chickpeas, saffron, pork meatballs, and sometimes lamb short ribs. "My family has roots in North Africa and Spain, so we like to add these ingredients in our pot au feu," he says. The pot also contains lard, which he says makes the meats extremely tender.

Wherever pot au feu is served, it's likely to be popular. At Petit Robert Bistro, chef and owner Jacky Robert says that the dish is a bestseller. He makes it the traditional way with beef short ribs, because they have enough fat and gelatin to make the dish moist and delectable after simmering for a couple of hours.

"We serve pot au feu accompanied with carrots, turnips, onions, and peeled boiled potatoes," says the chef. "My wife is from Korea, so I also like to serve Korean kimchee with the bone marrow." Like many French cooks, he recycles pot au feu the next day. The leftovers become hachis Parmentier, a dish in which layers of mashed potato and cooked ground beef are baked in the oven. "I see these two dishes as inseparable," he says. Broth from the pot can be turned into a nourishing consommé with freshly cut vegetables, and perhaps diced truffles.

That takes a peasant dish to another realm.