THIS STORY HAS BEEN FORMATTED FOR EASY PRINTING
First draft 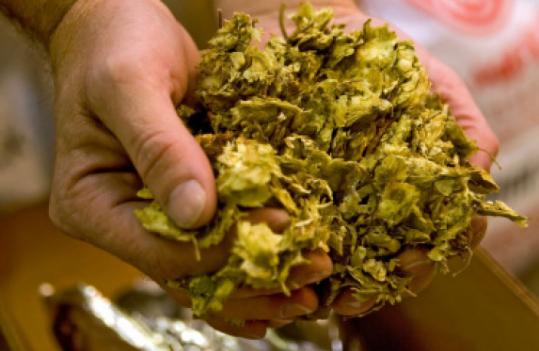 A warehouse fire in Washington state and hail storms in Germany and Slovenia have helped cause a shortage of hops. (jackie johnston/associated press/file 2007)
By Ann Luisa Cortissoz Globe Staff / January 9, 2008

Brace yourselves, lovers of India pale ales, pilsners, and craft beers of all kinds. There's a hop shortage brewing.

It's a bitter pill for everyone concerned. Brewers may have to adjust some recipes or stop making certain styles, and consumers will notice increased prices.

For years, American craft brewers have been adding hops to their beer with gleeful abandon. There's been a glut of the aromatic flowers that are one of the four basic ingredients in most beers - along with water, yeast, and barley malt. The oversupply and consequent low prices have had brewers pouring Cascade, Amarillo, Columbus, and other varieties into the brew kettle in huge quantities, giving rise to supercharged double IPAs and imperial pilsners.

But in the past couple of years a series of unfortunate events has made hops hard to come by. A fire at a warehouse in Washington's Yakima Valley in 2006 destroyed surplus from past years' harvests. Hail storms in Germany and Slovenia killed some crops and low rainfall in other areas of Europe led to lower-than-expected yields. Many producers in the hop mecca of the Northwest have been driven out of business by low prices and have sold their land to developers.

Hops give beers distinctive flavors and aromas, so brewers use precise amounts of various kinds to achieve the tastes they're after. High alpha acid hops such as Simcoe and Columbus are used in the boiling process to give beer bitterness; aroma hops such as Cascade and Willamette are used at the finish to add delicate citrusy, grassy, and flowery aromas. Other varieties, such as Northern Brewer and Centennial, do double duty as both aroma and bittering hops.

Many small producers, who often buy hops as they need them on the "spot market," are scrambling to find the hops they want, or any hops at all. (Much larger producers, such as Anheuser-Busch, aren't as affected because they have long-term contracts with hop growers.)

Though the is insulated from this hop crisis because it contracts directly with German growers, it was affected in an unexpected way. The company produces the Samuel Adams line of beers, but it also holds the LongShot homebrew contest each year. Winners have their recipes brewed and distributed nationwide by Sam Adams. But this year, says Boston Beer Co. founder Jim Koch, one of the LongShot winners called for hop varieties not used in the Sam Adams beers. So while Sam Adams could get the Tettnang, Hallertau, and other varieties it uses in its own beers, it couldn't find the hops to make the contest winner.

As for brewers who planned ahead and ordered enough of the 2007 crop, they are facing steep price increases.

"Prices have gone up double, triple, quadruple," says Ralph Woodall, director of sales forHopunion, which buys hops from producers worldwide and sells to craft breweries. Woodall, who has been in the business for 25 years, says this hop shortage "is the worst I've ever seen."

"Two of my favorite hops are going to be astronomical," says Mott, the Portsmouth brewer. "Columbus, which is my favorite for my imperial pilsner, is $25 a pound" - up from about $7 per pound, if you can find them at all.

Some brewers are faced with having to substitute available varieties for ones they're unable to get, while trying to maintain the same flavor and aroma.

"We had to revise one batch of one recipe this year," says David Wilson, head brewer at The Tap in Haverhill. He returned to the original recipe once he was able to find his preferred hops again. But because of the shortage, he adds, "We're probably going to start brewing beers that are a little less hoppy and a little more malty."

At Cambridge Brewing Co., brewmaster Will Meyers says that the price of a pint will probably go up enough to cover increased costs. And while he'll still be making a lot of very big, hoppy beers, "We're going to be a lot less cavalier about how many hops we use."

Still, as all cooks know, having to improvise is sometimes good. Meyers will be experimenting with herbs in his brews. "Times of adversity bring out the best in creativity," he says.

Aaron Mateychuk, head brewer at Watch City Brewing in Waltham, agrees. Mateychuk says that his brewpub will also be raising prices a little. He's been trying out botanical ingredients like bee balm to substitute for hops.

"It will be interesting to see how I can work around [the hops]," Mateychuk says. "It'll be a challenge."