Dipping into the season with chocolate-coated treats 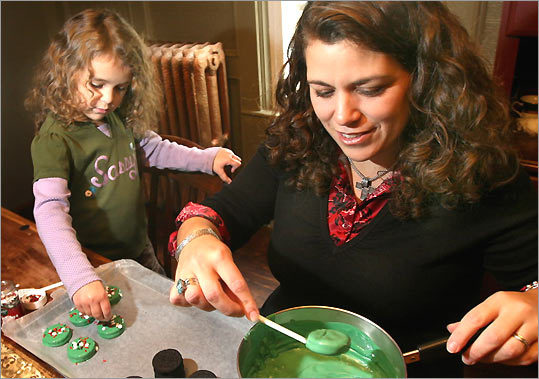 The kitchen of her antique farmhouse becomes a veritable Santa's workshop (if Santa dipped chocolates instead of making toys), awash in red, green, and white sprinkles, tins and ribbons, colorful cartons, and all the trappings and equipment necessary for giving away hundreds and hundreds of sweets.

Even Welch, 37, seems a bit awed when she stops to think about what she accomplishes each year. One of her specialties is chocolate-dipped Oreos - the kind you sometimes see sold in fancy candy stores for upward of $1 each. "Over the years, I've made them for bake sales, church fairs, school. I've probably made 50,000 pieces of candy in my life!" she says, then laughs.

It began in 1993 when Welch, then a recent college graduate, decided to make candies with her mother as an economical approach to gift giving. Both women are handy and talented, and it soon became an annual tradition that Welch kept up even after the births of David, 10, Jacob, 8, and Isabella, 5. When she took a break, last year, the complaints were loud and numerous, so this year she's back at it, dipping peanut-butter balls, turtles, coconut creams, pretzel rods, and more.

The dipping seasonis in full swing. On a recent afternoon, Welch demonstrates the technique of coating Oreos with green-tinted white chocolate. Isabella hovers nearby, eager to help by dusting the finished cookies with festive green, red, and white sprinkles. Dipping a cookie into chocolate might not seem very difficult, but it's the details that count. Welch makes the coating smooth and flawless, knows how to remove the cookie from the chocolate without making marks, and decorates it evenly and professionally.

The most important thing, she says, is melting the chocolate, which she does in a double boiler. As anyone who has ever melted a batch of chocolate knows, the greatest danger is moisture, which will cause the mixture to seize - become hard, grainy, and unusable. "I've messed up more batches of chocolate with moisture," says Welch. "Even a wooden spoon can make the chocolate wet."

A useful item to have, if you're doing this, is a set of special dipping tools. Sounds fancy, but they're just small, lightweight plastic forks and spatulas designed to take stuff in and out of chocolate leaving minimal traces. They can be bought inexpensively at candy-making supply shops; Welch purchases a lot of her tools and ingredients at Lorraine's in Hanover (lorrainescakesupply .com).

While Welch's reputation was built on Oreos - which she started doing long before they became ubiquitous - they are far from her only item. Ideally, she does six or seven recipes a season, which, she says, makes a good but not overwhelming assortment.

On this day, once she's through with Oreos, she's moving on to peanut butter balls. Chunky peanut butter and graham cracker crumbs give the rounds a firm, cohesive texture. Welch mixes the filling without cooking it. It should be "sticky enough to hold together, but not so much that it will flatten out," she says. "You've really got to get into it with your hands." She pronounces it foolproof. "It's not like baking; you're not going to mess things up by adding them in the wrong order." In Welch's hands, peanut-butter balls come together quickly, and she skillfully dips them in semisweet chocolate. "Milk chocolate would be too much like a peanut butter cup," she says.

Welch has so many little confections wrapped and ready that she's generous about giving them out. "If someone pops over unexpectedly, or if you're invited to a party, they're great to have on hand. Teachers, dance teachers, coaches, crossing guards - it's a gift that covers a lot of bases, and everybody enjoys it."