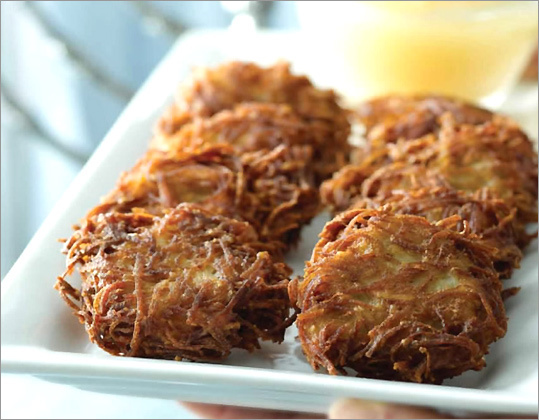 Latkes from "Quick & Kosher: Recipes from the Bride Who Knew Nothing" are a lighter version of the traditional potato pancakes.
By Lisa Zwirn Globe Correspondent / November 28, 2007
Text size – +

Grating, mixing, endless frying, spattered surfaces, and the lingering smell of oil are unenviable parts of making potato pancakes for the Hanukkah celebration. The reward is golden brown latkes, thin fritters that are crisp, tender, and potato-y with a hint of salt and onion.

On Hanukkah, which starts the evening of Dec. 4, frying foods is an ancient tradition, connected with the miracle of the sacred oil at the time of the Jewish military victory over King Antiochus of Syria in 165 B.C.E. To rededicate the desecrated holy temple, only enough oil was found to light the menorah for one day, but miraculously it burned for eight. Hence, Hanukkah, known as the festival of lights, is celebrated for eight days. In the kitchen, Jewish cooks all over the world prepare foods fried in oil. In this country, that means latkes, often served with applesauce; Israelis prepare sufganiot, a kind of doughnut usually dusted with confectioners' sugar.

For years, cooks here have tried to come up with lighter latkes. An oxymoron? Perhaps. But two new cookbooks boast recipes. And compared to thick, solid, oil-laden cakes, the newly thin, petite, and less dense fritters are downright ethereal. I decided I'd also try a modern and practical solution for kitchens with less-than-perfect exhaust fans and cooks watching their waistlines.

First I cooked from the new books. In the big, illustrated "Aromas of Aleppo" (HarperCollins), author Poopa Dweck explains that the foods of Aleppo, Syria, and most Middle Eastern countries, are lighter and more vegetable-oriented than the European-based Ashkenazic cuisine (food from Jews who lived in Eastern Europe). For centuries, says Dweck on the phone from her home in New Jersey, Aleppo had a thriving and prosperous Jewish community, but no longer; its descendants are now scattered across the globe.

Dweck is a first generation Syrian-Jewish American and has been very active in preserving the traditions of her family's homeland. Her potato fritter recipe, which was her mother's and is made year-round, contains five eggs, three large potatoes, and no flour or matzo meal. "My mother always said to make sure there's enough eggs," says Dweck. "The batter needs to be loose, so [the fritters] are not too heavy." The pancakes, which are seasoned with a little allspice, are crisp and delicate.

"Quick & Kosher: Recipes from the Bride Who Knew Nothing" (Feldheim Publishers) also offers a lighter version of the cakes. Author Jamie Geller writes that her shredded-potato latkes, from her European grandfather's recipe, "are not loaded with potato starch, flour, baking powder, or other non-essential ingredients." While the book promises that no recipe takes more than 15 minutes of prep time, frying a half-dozen or so batches of potato pancakes adds another 45 minutes. But it's easy, mindless work, and eager family members make the time go quickly.

Finally, pursuing a route that doesn't require the cook to stand at the stove frying, I tried some experiments. I decided to leave the skillets where they're stored and turn on the oven. I set out to make a thin, roasted potato cake using high oven heat, minimal oil, and a large sheet pan.

To accommodate a four-potato, four-egg batter yielding about 10 servings, I used a heavy-duty 12-by-17-inch pan with 1-inch sides (this is also called a "half-sheet," and is slightly larger and sturdier than an ordinary jelly roll pan). I put the pan, with a thin film of oil, into a 475-degree oven to become super hot. Then I added the grated potato mixture. This step helps the large cake brown and prevents it from sticking to the pan. It takes about 25 minutes for the cake to cook through, but to ensure a golden and crisp top, I slipped the pan under the broiler. It was a huge success, browned all over, easy to cut into squares.

If your family is like mine, there might be squabbling about who gets the brownest, ultra crisp latkes. When roasting one large potato pancake, there are plenty of edges for everyone.

And there are the other advantages. No spattering oil. No greasy burners. No flipping pancakes in glistening oil. The potato cake, which can be cut into as many as 32 pieces, isn't low calorie, but it absorbs only 1/4 cup of oil (latkes in a skillet use at least twice that). Surely this is enough oil to satisfy the Hanukkah tradition.

Just make sure your oven has a self-cleaning option.