John "Dillweed" Dill, 30, Charlestown
Professions: Techie and photographer
Style: "Neuromancer" on two wheels: sleeveless athletic shirt, rolled-up pants, goggles, crewcut.
Bike model: He owns about five, including a sleek titanium single-speed fixie with a red metallic skull and laminated cards in the spokes.
How long have you been riding around Boston? Five years
Where do you ride? "Anywhere during the day except [the Pike] and 93."
How to stay clean? Three-quarter-length pants keep chain grease on ankles, not fabric. (Dillweed has a bike tattoo positioned to show when he rolls his pants up.) And tighter clothes mean less fabric to get caught. Besides, he says, “the more you ride a bike the sexier you look. So you want to wear something tight.”
Must-have accessories? Messenger bag with a car seatbelt buckle; u-lock in his back pocket; keys on a carabiner.
Alter ego: Saturday nights he swarms with the Subversive Choppers Urban League, a semi-secret DIY modified-bike crew. At those events, anything goes. “I’ve worn dresses,” he says.
(Suzanne Kreiter/Globe Staff) 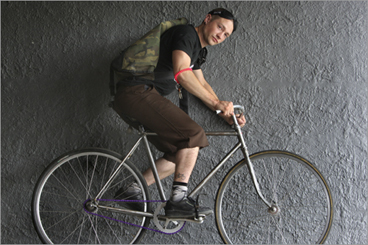