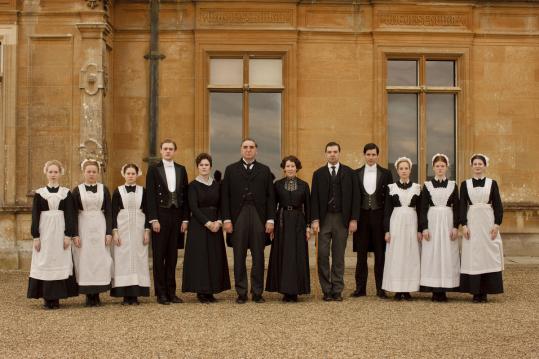 The period when “Downton Abbey’’ is set (starting in 1912 and picking up in 1916 for its second season) is a forgotten fashion era. (TMC-NBC UNIVERSAL via afp)
By Christopher Muther Globe Staff / December 20, 2011
Text size – +

Thank big budget shows such as “Mad Men’’ for the vigilant attention to TV wardrobes. But style has always been integral to what we watch, spawning trends along the way, from the good (Leighton Meester’s “Gossip Girl’’ handbags) to the bad (let’s try to forget about Robin Williams’s “Mork & Mindy’’ rainbow suspenders for a moment, shall we?).

Trendsetting or not, wardrobes can be as critical as brisk dialogue to a character’s identity. Jessica Lange’s floral dresses are so crucial and creepy on “American Horror Story’’ they deserve a mention in the credits.

What’s the best-dressed show now? With the exception of “Mad Men’’ and “Gossip Girl,’’ which have officially been retired to our hall of fame, here are a few contenders for the title.

Emmy Award-winning costume designer Susannah Buxton was faced with a peculiar dilemma when she started creating a wardrobe for the PBS “Masterpiece Theater’’ drama (which returns Jan. 8). The clothes of Edwardian England are well documented, and the fashions of the Roaring Twenties have been seared into collective consciousness like a glare from Gloria Swanson. But the period when “Downton’’ is set (starting in 1912, and picking up in 1916 for season two) is a forgotten fashion era.

“It’s one of those very short periods of time that’s overlooked in theater and television,’’ Buxton says on the phone from England. “The First World War is overlooked, but it’s an extremely interesting time in fashion. It doesn’t even have a title. It’s just called the Teens, which isn’t good.’’

Buxton scoured libraries for photos, looking at silhouettes and shapes to guide her designs. Not only does she have the estate’s servants to costume, there are the posh residents of Downton.

“You have to try to make the period accessible to a 21st-century audience, but at the same time it needs to reflect the time,’’ she says. “We kept the silhouettes strong and simple. The period left the heavy, laced, and corseted pieces behind, which is lovely. It was a dramatic shift in fashion.’’

Aside from Maggie Smith’s dowager - whose wardrobe is custom made - the ladies of Downton are attired in looser fitting, ankle-dusting frocks. Buxton looks for dresses from the era at flea markets, and tries to salvage what she can from them, in addition to creating new dresses.

“We built a dress around a panel from an Elizabethan dress that we found,’’ she says. “But the panel started to disintegrate during the course of filming. The beads were falling off. It was close, but we managed to finish filming.’’

Boston is partially responsible for Zooey Deschanel’s quirky and colorful “New Girl’’ ensembles. Debra McGuire, the costume designer, was in Boston working on the Mila Kunis and Mark Walhberg film “Ted,’’ and during her spare time she did what any good costumer would do: She hit the stores.

“I did all of my vintage shopping in Boston,’’ she says. “I went to Bobby from Boston, I went to Artifaktori. I found a warehouse near Bobby where some guys were storing vintage and tracked down some great things. That’s how her look started.’’

Her vision for Deschanel’s character was cute dresses in quirky fabrics. The goal was to evoke Marlo Thomas’s “That Girl’’ breezy and bright style. She wanted hemlines and details from the 1960s, ’70s, and ’80s mixed and barely matched. She pairs short skirts with boots and mates unlikely colors - but always in primary shades.

“I think of Crayola crayons and I think about the earliest, fondest memories we have of putting color together,’’ McGuire says. “I understand the pop culture vibe of the show, and for me it was all primary colors.’’

A wardrobe veteran from shows such as “Friends,’’ McGuire says it’s great when you have a meeting of the minds with a show’s actors.

“It was fun because when I had my first fitting with [Deschanel], she kind of freaked out that I was totally on the same wavelength as her,’’ McGuire says. “With this show, she really is the ‘That Girl’ of this era.’’

For “Pan Am’’ costume designer Ane Crabtree, Life magazine became a style bible. To get 1963 just right, Crabtree got her hands on nearly every copy from that year.

“We watch films for inspiration,’’ Crabtree says. “We look at novels that were being published, or poetry, art work, and music. All of that really goes into each episode’s wardrobe. I’m insane that way.’’

In addition to capturing New York, she also has to show what was being worn in other countries as the crew makes its foreign flights. Nothing is purchased off-the-rack: Half the dresses are made in the wardrobe department workshop, half are vintage.

For the show, she looks for inspiration from designers such as Oleg Cassini and Balenciaga. Crabtree says the cast has slowly adjusted to the clothing of the era. The actresses are strapped into girdles and men in the cast are slightly uncomfortable in the snug trousers of the era.

And then there’s the small matter of the “Mad Men’’ comparisons.

For the modern and loose retelling of Alexandre Dumas’s novel “The Count of Monte Cristo,’’ “Revenge’’ costume designer Jill Ohanneson needed to come up with a concept of what an angry young woman, fresh out of a juvenile detention hall, would wear in the Hamptons as she exacts revenge upon the monied scoundrels who wronged her father.

For the lead character of Emily Thorne/Amanda Clarke (as portrayed by Emily VanCamp), Ohanneson looked to another blonde for inspiration: Grace Kelly.

“We talked about who could be an example for this character,’’ she says. “And we came up with Grace Kelly because she’s so elegant, yet simple and graceful. Here’s this angry, angst-ridden girl coming out of juvie, and we needed to figure out how she might be able to cultivate and emulate serenity so she could go in there and not be fazed by anything.’’

To that end, Ohanneson keeps Emily Thorne in white, cream, and tan, with splashes of blue and yellow.

The show’s other female lead character, Victoria Grayson (as portrayed by Madeleine Stowe), shows her curves in sexy bandage dresses from Herve Leger. But no matter which designers Ohanneson puts on the actresses, she knows people are watching.

“We have two blogs that we interact with the night of the show,’’ she says. “And immediately we get questions from readers who want to know where they can get a particular dress. It’s fun for me that people are really watching those details.’’

Daniel Lawson may have started his research for wardrobe for “The Good Wife’’ by looking at the wives of disgraced politicians such as Eliot Spitzer and Anthony Weiner, but he ended up heading in a much more glamorous direction for star Julianna Margulies.

“Women who have been through this kind of thing are not necessarily fashion icons,’’ he says. “But at the start we wanted to make her wardrobe more of a politician’s wife. Initially she was thrown into a situation of being a working lawyer and not having the money to rework her wardrobe, or to purchase a new wardrobe. So at the start we did a lot of mixing and matching.’’

In keeping with her circumstances, Lawson pared down jewelry during the first season and kept design details to a minimum. But in the show’s third season, he’s able to glamorize Margulies’s Alicia Florrick with designer names to reflect the fact that she’s made peace with personal relationships in her life.

“She got a promotion at the end of the last season, which means she’s spending more money on clothes,’’ Lawson says. “So now she’s wearing a lot of Akris, Dior, Zac Posen, and Max Mara.’’