THIS STORY HAS BEEN FORMATTED FOR EASY PRINTING
Makeover Issue 2011

Back to my roots

I was 30 when I moved to Paris in 1967. Among the things that intrigued me were people who took their dogs to restaurants and how a short, stout city employee always found you no matter where you were in the Tuileries to demand a few centimes for the painful iron chair you were sitting in. But at the top of the list of intriguing things was the fact that no French woman of any age had any gray hair. Each strand matched the next, shades of brown, black, blond, and red, sometimes red with a hint of purple, and they were never caught with their roots showing. Meanwhile, my gray strands multiplied daily.

My mother had splendid gray and then white hair for as long as I can remember, so I didn’t think much of it when gray started turning up in mine. But in Paris, this was not comme il faut. I was heavily pregnant, so I couldn’t be svelte like French women were or chic, clothes-wise, but I could do something about my hair. My natural color was just brown, but when I emerged from Jacques Dessange, it was Warm Mahogany. My appointment had taken four hours and had cost hundreds of francs, but walking down the Avenue Montaigne, unable to button my coat over my unborn son, I knew it was worth it. The midwife at American Hospital who delivered my baby asked me who did my color. While my husband was away that summer, our upstairs neighbor, M. de Jeannest, whose wife was at the family chateau, invited me out to dinner. For the next 41 years, I colored my hair.

For a while after we moved back to Wellesley, I tried dyeing it myself. Lady Clairol became my good friend but not my best friend, because after a year or so, my husband noticed my hair was turning green.

“What do you mean green?” I asked. We were out walking on one of those brilliant New England fall days, cold, blue sky, orange leaves floating around us.

“Well, I don’t know,” he said, puzzled himself. “Your hair just looks green. Not completely green, but green here and there.”

After that, Raymond, Martha, Emilio, Sophia, and Reza, among others, colored my hair. Some of my friends stick to one hairdresser for life, but each time I realized that my color didn’t make me feel about myself the way my Warm Mahogany had, I made what had become my every-three-weeks appointment in someone else’s chair. Every three weeks comes around very quickly when you have a life to live.

As the years sped by, highlights were suggested by any hairdresser who wanted to walk to the bank, then the demineralization process to wash out those evil substances that reside in your town’s water and drain your hair of any identifiable color, and, of course, you have to have a trim and a blow dry and a bottle of shampoo to take home, a must for colored hair at $36 for 8 ounces. By the time you get to leave, you’ve spent more than your food budget for the month. Also, by the end of the three weeks, my hair was brittle and dry and faded, and if I’d been in the sun, my husband told me he could see red. Red, to me, was almost as bad as green.

By the time I turned 60, my children were asking me whether I planned to have brown hair in the nursing home, and I began bringing up the subject of going gray to my hairdressers. Every one of them said a variation of the following: “No.”

They’d part my hair and stare at my roots, which looked white to me. “Salt and pepper! You don’t want salt and pepper. And anyway, your eyes are brown, wrong color. Your skin is olive, wrong tone. Do you want to look like an old lady?”

My husband was not enthusiastic either.

“I never thought I’d sleep with a gray-haired lady,” he moaned.

“I never thought I’d sleep with a bald-headed man,” I answered.

Suddenly, I was 71. My daughter, Susannah, who lives in Manhattan but swears she can get almost anything she wants in Wellesley, sprinted into the house with the news.

“Mom, there’s a big sign in the window of a beauty parlor on Central Street.” She threw her packages on the sofa. “It says ‘Best in Boston for Turning Hair Gray.’ Here.” She thrust a card at me. “I’ve made an appointment for you with Helena.”

Over the next nine months, I put my hair into the hands of Helena. She painted on some miracle glop, which she swore had no ammonia in it and would wash out.

“A toner,” she said, “so you won’t see the difference between what’s new and what’s old.” She held up a hunk of the old. “See how orange this looks? It’ll tone that down.” At each appointment, Helena’s husband, Ellie, would lop off as much of the old hair as I would allow, and between Helena’s attention and Ellie’s haircut, I didn’t even mind looking in the mirror. I wondered whether there was something wrong with my vanity level, because Helena said most people don’t get past the second month. The only person who showed a sign of alarm was my too familiar but expert roofer.

My favorite clerk at the supermarket didn’t gawk. My dental hygienist didn’t drop her pick. My friends watched the process closely, and none of them hinted that maybe this wasn’t such a good idea. In fact, they were so rapturous in their praise when finally the ta-da moment came, revealing lots of what Lady Clairol might have called Silver Birch, I wondered whether I had looked so awful before.

Now I go to Ellie every six weeks for a haircut, in and out within an hour. I can wear white and yellow and pale pink, colors that used to wash me out. When I’m away on a trip, I don’t have to worry about the arrival of roots, and when I’m at home, I make an appointment with myself for a shampoo and blow dry. Afterward, Silver Birch and I go out to meet the day. 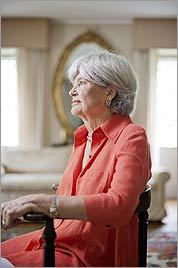 (Photograph by Webb Chappell/Wonderful Machine) NATURAL WOMAN The author at home in Wellesley this month.

See which stars and public figures are going "au naturel."
Read more from this issue.
Follow Globe Mag on Twitter
Your comment is subject to the rules of our Posting Policy
This comment may appear on your public profile. Public Profile FAQ