Bobbi Brown got a boost from her Emerson education. Now she’s one of the college’s biggest boosters. 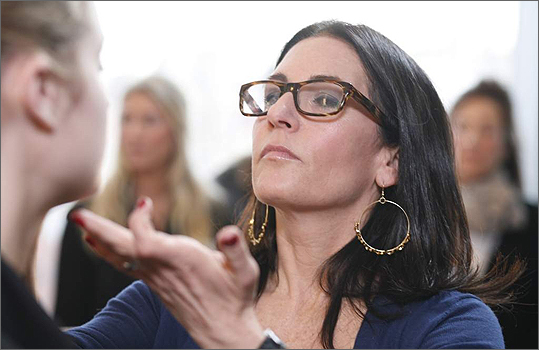 NEW YORK — Strange but true: The course of makeup history could have been radically altered if cosmetics magnate Bobbi Brown had never strolled by the Magic Pan restaurant on Newbury Street during the mid-1970s. If not for the Magic Pan, Brown would never have enrolled in Emerson College, and as a result, may never have never discovered her love of the world of makeup.

“Really, the reason why I went to Emerson was because of the Magic Pan,’’ she confesses on a dank, foggy day in New York. “It had an outdoor cafe. We didn’t have those in Chicago at the time. So I decided to go to Emerson because I thought the Magic Pan outdoor cafe made Boston a very European city, especially for a girl from the Chicago suburbs.’’

Since her 1979 graduation from Emerson, Brown has created a makeup empire. Bobbi Brown has 18 freestanding stores, and her products are sold in nearly 1,000 stores in 56 countries around the globe. In addition to writing six books and becoming a regular beauty expert on “The Today Show,’’ Brown has become one of Emerson College’s biggest boosters, donating more than $1 million in recent years.

Those funds have allowed the college to offer its students access to a professional makeup studio for classes and workshops. It is a critical element of the school’s drama program, not to mention those Emerson students dreaming of careers in film and television. In addition, she funded the school’s gleaming gym, an unusual and welcome amenity for a small arts school.

“It’s very different for a college of the arts to have a gym,’’ says retiring Emerson president Jacqueline Liebergott. “And there would be no gym if it wasn’t for Bobbi.’’

New York and New Jersey-based makeup artist Susmta Patel, who has consulted for companies such as Shiseidio, Lancome, and , in addition to working for Bollywood, says Brown’s accomplishments have inspired her own work. Brown, she says, has helped revolutionize the makeup market.

“She’s best known for helping women create a natural look,’’ Patel says. “And that has been critical for my work on skin tones of all types. I’m a big fan of what she does.’’

It may seem obvious after these successes that Brown, who lives in Montclair, N.J., was made for the alluring but competitive world of cosmetics. The 54-year-old mother of three is warm, affable, and quick to joke with her colleagues, but she’s quite serious when it comes to the business of beauty.

“Nothing gets created, named, or marketed without me,’’ says Brown, who sold her company to Estee Lauder in 1995, but still retains her title as founder and chief executive of the company. “I love it when people show me things that I hate. Because even if I hate it, it still might be a great idea.’’

It’s hard to believe that when Brown first arrived as a freshman at the University of Arizona, she was unsure of her professional path. At the end of that year, she told her mother she wanted to drop out of college. Her mother informed her that leaving school was not an option, and told her daughter to focus on what she enjoyed rather than worrying about a career.

“My mom said, ‘Pretend today is your birthday and you can do whatever you like.’ I could have said ‘Go to Paris.’ Instead I said I wanted to go to Marshall Field’s and play with makeup,’’ Brown recalls.

What Brown didn’t want was cosmetology school. She visited Emerson at the suggestion of a family friend, and enrolled in 1976, majoring in theatrical makeup, a course of study she cobbled together with the help of an adviser. She took courses in photography, film, public speaking, and history. She also worked at the student television station and did makeup for many of the school’s theatrical productions.

“In a film class, I was required to make a short film,’’ she says. “I couldn’t think of what to do, so I started thinking about the makeup. I took my roommate — I made her up as an old woman. I had her eat dog food, jump out a window, and commit suicide. Then as she laid on the ground, she became a ghost or a skeleton or something. It was all about makeup.’’

After graduating, Brown discovered there were scant opportunities for makeup artists in Boston. So she worked as a waitress at the Flower Garden Cafe (“I’ll never eat chowder again,’’ she pledges) while hunting for steady work, and then decided it was time to move to New York. Once there, she called a freelance makeup artist for advice. When she didn’t get a call back, she rang up the makeup artist’s agent. Eventually Brown found work, and within five years, she had her first cover for Vogue in the mid-1980s.

Brown established herself as a sought-after makeup artist in New York by the early 1990s, but was frustrated by the makeup colors available at the time. She found everything to be garish and bright. The stylistic mistakes of the 1980s — and there had been many — had yet to be rectified. While on a photo shoot, Brown met a chemist, and in 1991, the pair began working on new and more natural-looking hues. Shortly after, she met a buyer for Bergdorf Goodman. Brown’s first line of 10 lipsticks went on sale there soon after.

During the company’s 20-year history, she has accumulated a string of celebrity fans, such as Sarah Jessica Parker, Susan Sarandon, and Brooke Shields. The company also handles makeup for several designers during New York Fashion Week.

“She has given women so much confidence. She’s really the first one to show women how to do their own makeup and to show them not be afraid to do it,’’ says Felicia Milewicz, beauty director of Glamour magazine, who first worked with Brown more than 20 years ago when the would-be mogul was just starting out. “Her idea of natural beauty really changed everything. It’s the idea that women should wear the makeup rather than the makeup wearing them.’’

Not forgetting her alma mater and its importance in shaping her life, Brown gave the school money to open a makeup studio in 2003. The studio not only gives students a professional space to prepare makeup for school performances, it’s also home to a series of makeup courses.

Two years ago, Brown donated funds for the school to open a gym, which is named for Brown and her husband, real estate developer Steven Plofker. On a campus visit years after she had graduated, Brown cried with happiness to see how much the campus has grown. But despite that expansion and high-profile donations from Brown, Denis Leary, and “Will & Grace’’ co-creator Max Mutchnick, she still thinks the campus is missing something.

“I would love for them to introduce a makeup major,’’ Brown says with a smile. “There is no college in the country that offers a makeup major. I think Emerson should be the first. We’ve talked about it, but they’re noncommittal. We’ll see. I have a good track record for making things happen.’’

Beauty gurus who made it big