A salute to military style 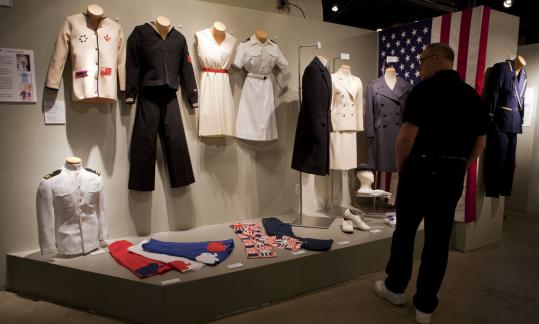 “Frontline Fashion’’ is a new exhibit at the Charles River Museum of Industry & Innovation. (Kayana Szymczak for The Boston Globe)
By Liza Weisstuch June 2, 2011

Military characters have long been visible in pop culture, from G.I. Joe to Beetle Bailey to Alan Alda’s “Hawkeye’’ and his pals on “M*A*S*H.’’ Military terms pervade the language (see: mission accomplished, bite the bullet). And military style has been part of design for so many decades, it’s easy to forget that wardrobe essentials like khakis, bomber jackets, combat boots, and trench coats were appropriated from war zones.

“ Fashion,’’ a new exhibit at the Charles River Museum of Industry & Innovation, serves as a reminder. Developed and curated as a joint venture between Lasell College faculty and students, “Frontline’’ chronicles the role military dress has played in the fashion world.

Jill Carey, who teaches a collection research class as part of Lasell’s fashion merchandising major, worked with now recent graduate Eliza Fitzgerald on the project. While researching developments in military textiles, they noticed the increasing presence of military style on fashion in general.

The influences run the gamut from the obvious (camouflage patterns; the double-breasted suit jacket, which takes its cues from naval jackets) to the surprising. Did you know that the classic bell bottom, for instance, was modeled on the flared pant leg of Navy uniforms during Vietnam? When crafting their iconic looks, designers such as Yves Saint Laurent and Chanel borrowed the classic tailoring and features of military dress, like crisp silhouettes, fabrication, and other design details.

Highlighting items from Vietnam, the Gulf War, and Iraq, the Lasell team created the show with items obtained from Battleship Cove, the ship museum in Fall River, Cur.io Vintage in Waltham, the American Textile History Museum in Lowell, and the Lasell Fashion Collection, which Carey curates. Uniforms were donated by Kim Farah, a chemistry professor at Lasell who served with the Army in the Gulf War, and First Lieutenant Samuel Bath, a member of the National Guard and son of Lasell fashion merchandising professor Richard Bath. Representatives from a nearby Marine Recruitment Center visited the exhibit before it opened to provide insight and guidance regarding some uniforms.

“It’s interesting to look at the uniforms’ influence on the structure of a suit, and the details like buttons and medals,’’ said Fitzgerald.

The sensitive nature of presenting a wartime subject in a lighthearted, entertaining manner was not lost on the students. “When we were putting it all together, I was handling these items like helmets. I couldn’t even imagine the stories behind them,’’ said Maria Rogers, one of the show’s junior curators. “It’s hard to think that these things were used in combat halfway across the world.’’

Liza Weisstuch can be reached at liza.weisstuch@gmail.com.