Despite Tom Ford’s objections, there’s a time and place for casual city wear 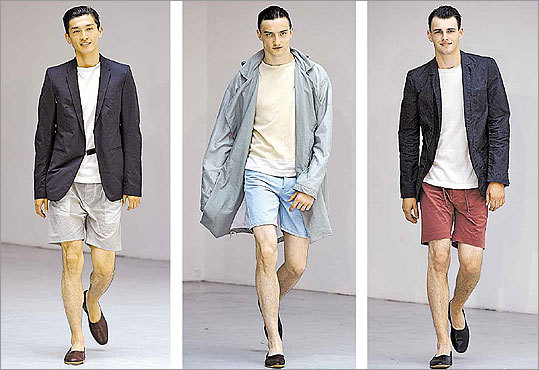 Last week, easy-on-the-eyes designer Tom Ford dispensed a handful of rules to Another Man magazine about how to be a modern gentleman. These included some very thoughtful and polite edicts, such as the importance of good manners and not being racist or judging people by their backgrounds. (Listen up, John Galliano). But the rule that ignited a firestorm of fashion fury was this one: “A man should never wear shorts in the city. Flip-flops and shorts in the city are never appropriate. Shorts are only to be worn on the tennis court or on the beach.’’

Before I share my thoughts about Ford and shortsgate, I need to preface them by saying that I respect Ford a great deal. His taste is impeccable and his directorial debut in the film “A Single Man’’ was eye candy with a melancholy heart. Truly, Ford could do no wrong — until now.

While flip-flops are generally not appropriate footwear for strolling around the city or, more important, for going out to dinner, I must draw the line at shorts. Shorts have an appropriate time and a place for men, and one of those is a casual afternoon in the city on a muggy day. If my lifestyle afforded me the opportunity to get from point A to point B in an air conditioned town car at all times — as Mr. Ford’s does — I would donate my shorts to Goodwill and promptly go shopping for a full wardrobe of well-tailored British suits. Sadly, most budgets do not permit such extravagance. So when I’m riding my bike around town or walking on Newbury Street on a sweltering July day, I have no problem baring my knobby knees. I’m sorry, Tom. Please forgive me.

Curiously, Ford has decreed that a man’s knees are not suitable for urban viewing, but he seems to have no issue displaying other man parts. In a photo spread in the Nov. 2007 issue of Out magazine, Ford gleefully displays his pert derrière while snapping a towel at some male models. He’s also been quite open about views on nudity. In last month’s issue of Interview, Ford said: “. . .when I come home I actually take off all my clothes, and I wear no clothes until I leave. I eat naked. I do everything completely naked.’’

Call me old fashioned, Mr. Ford, but I think I’d rather walk around the city wearing shorts than sit home au natural, balancing a Lean Cuisine on my lap while trying to watch “30 Rock.’’ Ouch.