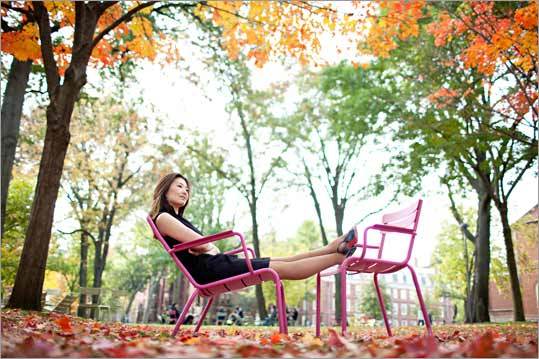 Q: Did you start getting strange looks at Harvard when you became interested in fashion law?

A: When I started working on fashion as an academic matter, there was a curiosity. People would ask, “Why are you interested in fashion?’’ What I used to ask is, “How could you not be interested in fashion?’’ If you have to put something on your body, then some thought is going into it. I think that at a place like Harvard, there’s a tendency to think that caring about fashion makes you less serious. But I don’t believe it when people say, “I don’t know anything about clothes.’’ Everybody cares at some level. It’s something that’s a part of everybody’s life.

Q: You and your husband [New York Times contributor Noah Feldman] are so well-known in law circles that you even have a combined celebrity name — Feldsuk. Is it a source of pride or does it make you cringe?

A: Over time, I have come to mind it less. At first, it was a bit annoying, and then you think, “This is life.’’ You try to do the work that you do, and do it well. If you do good work, you get recognition for it. Sometimes it’s an unexpected kind of recognition.

Q: Do you think more about how you dress since getting involved in fashion law?

A: Before I started working on the issue, I always had some kind of interest, but I think my interest in fashion has definitely grown through my work. But it hasn’t changed my favorites. My favorite designer is Jussara Lee, she’s a small designer working in New York. I love everything she does. She’s the kind of independent designer I hope this bill will eventually protect.