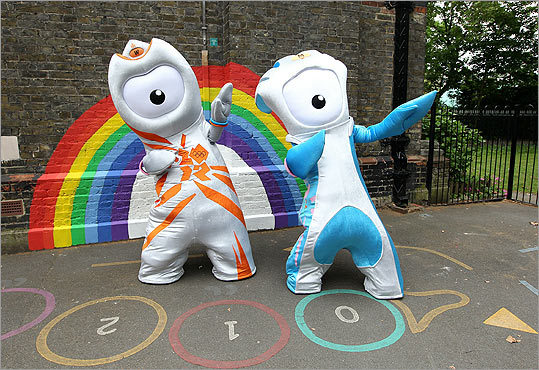 Wenlock (left) and Mandeville are the mascots for the 2012 London Olympics. Each has a Facebook page and a Twitter account.
By Luke O'Neil Globe Correspondent / May 27, 2010

Last week the world was introduced to Wenlock and Mandeville, the mascots for the 2012 London Olympics, an unusual duo that immediately found themselves mired in controversy. Like oversize cellphones, the creatures gaze out with a huge single eye, their lobster-like claws waving in cheery welcome. The debate over the mascots began immediately, as the sporting and design communities wondered what exactly the tech-age Polyphemuses had to do with the Olympics — or, for that matter, with London.

For years, Olympic mascots were depicted as indigenous animals of the host country, ones generally festooned with elements evocative of the national character. The mascot of the 1984 Los Angeles Games was a bald eagle named Sam who wore a top hat covered with stars and stripes. In 1980, Moscow went with Misha, a bear, wrapped in the Olympic rings. Sydney settled on a trio of animals for the 2000 Games: a platypus, an echidna, and a kookaburra, all native to Australia.

Recently, designers have introduced a more diverse array of characters, some of them cartoon and video-game ready, all the better to make use of the multiple platforms where mascots now find a home. Atlanta’s 1996 mascot, Izzy, was an unidentifiable blue blob decorated with Olympic rings, running shoes, and a huge grin. For the 2008 Games, Beijing unveiled the Fuwa, five good luck dolls that represented animals, as well as natural elements and traditional Chinese blessings.

As for Wenlock and Mandeville, while they may be weird and somewhat unsettling walking around in crowds, their shiny online avatars are a tad more endearing. Their back story? As imagined by children’s author Michael Morpurgo, the one-eyed buddies are crafted from drops of steel used to build the Olympic stadium. Each has a Facebook page, Twitter account, and videos, presumably so kids can bond and interact with them. Whether the rest of the British populace will remains to be seen.

“Mascots can be engaging and appealing to younger audiences, but at the same time should kind of convey what the country is about and the Olympic spirit,’’ says Dean Whitney, principal brand strategist with Newton-based design firm Continuum. “I don’t feel like either of these are doing that too well.’’ We asked several other members of the local design community for their take on the mascots from an aesthetic and branding perspective.

“We appreciate the angle and the irreverent nature of the characters and that they’re going after the demographics of kids, but ultimately it didn’t pay off. There are so many different iterations of these characters, from the physical mascot costumes to the metallic-looking illustrations and animated version — they all take on different tones. But for me it gets so far away from what the spirit of the Olympics is, it feels like a wildly different brand to me. It doesn’t feel like sports.’’ GRADE C (A for effort, though)

“I like them, but they are obviously aping the semi-subversive style of the designer Japanese toy market but with a side of Teletubbies. While popular with hipsters, I’m not sure that it will be that effective for them on a commercial level, since this aesthetic speaks directly to a very small audience. Cute and weird works for me as an artist, but I foresee most people not really getting it and sticking to Mickey Mouse and SpongeBob. I’m pretty sure most people watching sports don’t read Juxtapoz magazine.’’ GRADE C

“It feels like they’ve fallen off the mesmerizing amorphous monster bandwagon. I don’t associate them with athletics at all. Their bodies are mush. Maybe they have superpowers? They have a drug-induced wackiness about them that, in my opinion, isn’t a good thing to pair with something that’s supposed to be as sober and prestigious as the Olympics. They look like body pillows for the athletes to put between their legs at night to keep their backs straight.’’ GRADE C

Darren Crawforth, director of design, advertising, and marketing, for Modernista!,

“The overall branding of the 2012 Olympics has been much talked about already, the logo being almost universally rubbished. Mandeville and Wenlock seem like just another two pieces to an already confused and disparate brand campaign. I don’t believe in focus groups and these poor creatures have been subjected to 40 of them over 18 months. What chance did they have? As with anything that’s designed by committee (look at the last 30 years of World Cup and Olympic logos) it fails to have one singular feature that is meaningful or memorable as it was designed to please absolutely everybody. Today, most mascots are for kids, to add a playful element to what might otherwise be a grown-up experience. Ultimately, they are to generate money from the sale of merchandise.’’ GRADE F

“As a designer we design things for target audiences, so my big question is, who is the target audience for these mascots? Looking at the videos online — it appears that it’s younger people, getting them excited about the Olympics. So the people who are upset about the design aren’t the target audience. . . . [The live mascots] are like these weird, fat stuffed things. But if you look at the video and some of the background on the characters they’re actually kind of cool. There’s a whole story behind them. By the time 2012 rolls around moving media will be more accessible and the target audience will be seeing this as moving media. They’ll be seeing this as clips on their phones and whatever the next iPad is and computers in schools. I think these mascots need movement to work. In the backstory they’re saying these guys are two little drops of metal that came to life, and they did beat all odds. They became these animated creatures when they were destined to be just part of the metal of the Olympic stadium. That’s a childlike approach to the feeling that the Olympics have. But as a stand-alone visual element, they don’t work. They need that story.’’ GRADE B for children, D for adults

“I’m not completely offended by them, but I’m a big fan of Youppi (former Montreal Expos mascot, now employed by the Canadiens), and no one knows what he is. They’re very reminiscent of the vinyl toy culture which is huge right now. The problem is that’s a very limited market. You need to have the right balance between something unique, but also something with broad appeal so kids will want them, and parents will buy them. These don’t have it. They’re just too off the wall. My 4-year-old might even be scared of the huge eye and lobster claws. I would have gone with something more suggestive of London. But would that have caused a stir? Probably not. The bottom line is they got people talking, and that’s the whole idea, to raise awareness. I didn’t even know that the Olympics had mascots and now I do.’’ GRADE C+