Let me school you about preppies 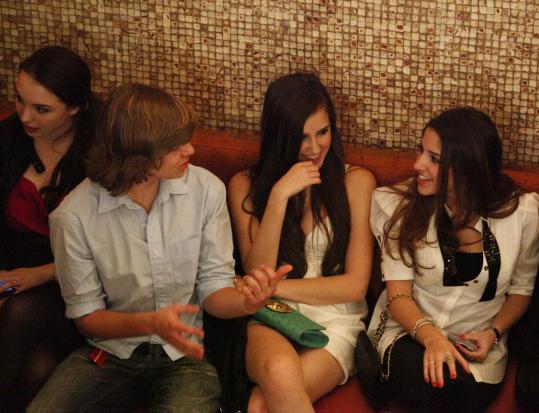 The cast of “NYC Prep’’ (above) hardly fits the definition of preppy. Where are the navy-blue blazers and ties (below)? (Heidi Gutman/Bravo)
By Sam Allis Globe Staff / July 16, 2009
Text size – +

So the Bravo cable channel has given us “NYC Prep,’’ the ludicrous reality show about spoiled rich kids, most of whom attend Upper East Side private schools. Excuse me while I examine my cuticles.

The kids in the show are nouveaux riche airheads who talk endlessly about shopping. Think Valley Girls and Boys moved east. What they have none of is class.

Worse, this Bravo mess (which airs Tuesdays at 9) misses the essence of preppy culture. The name “preppy,’’ lest we forget, comes from prep schools. And prep schools are, in the cultural sense I’m talking about, boarding schools - not country day or Upper East Side privates. It was on boarding school campuses that true preppies were spawned. The petri dish in which the culture was created and perpetuated was the prep school dormitory.

It is there that one was introduced at a young age to a “Lord of the Flies’’ insular existence that defies description. Essential friendships were forged and enemies made in prep school dormitories. It is where you were introduced to hall hockey and a particular strain of sarcasm.

Preppies are timeless. Wait long enough, and they’re in vogue again. They have never changed. Everyone else has. This speaks to a sense of security on their part rather than a lack of imagination. They never went through their Dolce & Gabbana phase.

Preppies gave America the sport coat - an advance on par with the wheel - and pioneered the blue blazer. They gave us khakis - and they really are pronounced like “car keys’’ in Southie - along with polo jerseys, the two-button suit, button-down collars, the list goes on. To dismiss this as preppy is to miss the point. We’re talking classic, conservative men’s clothes.

When started push ing khakis over a decade ago, I’d see billboards with the coolest of the cool - Miles Davis - in khakis. Jazz legends like Davis and Chet Baker, I have on good authority, wore preppy clothes. They didn’t buy them because they were preppy - they had never heard of the word - but they liked the understatement of the clothes after the loud outfits in jazz that had preceded them.

I write about preppies from the remove of decades after my own boarding school experience, which I thoroughly enjoyed. But prep school culture has changed dramatically since then. The robust multiculturalism on today’s boarding school campuses, fueled by institutional wealth unavailable in public schools, has replaced the negativity that used to dominate prep school culture.

Today, there is an ethos to do good, here and abroad, among the good boarding schools that was nonexistent in the old days. You’re more likely to see kids from Ghana and India at the big affluent places like Andover and Exeter than flaxen-haired lacrosse players from Locust Valley.

Whatever allure in preppies there may be now is anchored in the past. It speaks to an old world of exclusion and exclusivity, of final clubs and blackballs, of pumps with black tie and the Social Register. (Whatever happened to the Social Register anyway?)

There is a wistfulness to this whole preppy thing that reminds me of Jay Gatsby, Fitzgerald’s great fake who stared into the night at the green light at Daisy Buchanan’s dock across the bay, aching for the woman.

The reigning king of preppy wistfulness remains Ralph Lauren, born Ralph Lifshitz in the Bronx, who has created the ultimate illusionary preppy world. His efforts are nothing if not about a yearning for a past he never knew. His ads relentlessly portray a life of white flannel, wooden tennis racquets, and elegant old cars.

His threads are beautiful, in contrast to parvenus like Vineyard Vines, an upstart that makes clothes for men and women that are parodies of preppiness. J.Crew still answers the bell because it sells smart preppy knockoffs.

The preppy look, it should be noted, is global. When I lived in Italy during the ’80s, I bought a pair of Timberlands in the great city of Bologna, home of the oldest university in Europe. In Italy and France, rich kids wore alligator jerseys with collars up and striped Brooks Brothers button-downs. Ditto for the well-heeled in Latin America.

The choice of preppy clothes among the young and rich abroad had nothing to do with the past. It was simply a matter of style. Remember, it was in France that the alligator jersey (Chemise Lacoste) was born. Countless American kids today want them simply because they look good, oblivious to any larger meaning.

“NYC Prep,’’ ludicrous and dispiriting, has zero to do with the true preppy culture, which means old preppy culture. Love it or hate it, the real thing is pretty much sepia-toned by now. Every once in awhile, marketers will try to sell patch madras or seersucker again. What they’re selling is the past. No one drinks gin and bitters anymore, but who cares?

Sam Allis can be reached at: allis@globe.com