Dressing a comedian: loud and proud 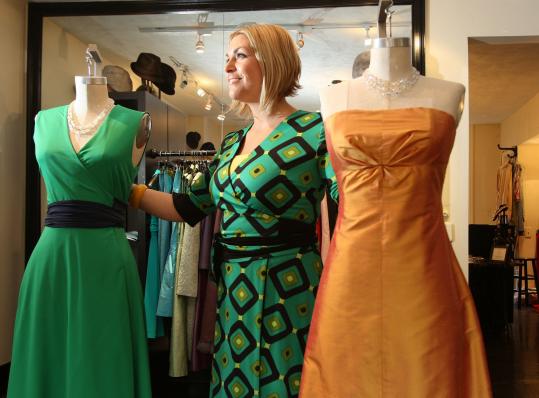 If you're an oft-censored, over-the-top insult comic, self-described as the "Queen of Mean," what do you wear?

It's the question comedian Lisa Lampanelli had to ask herself once her career exploded a few years ago. The constant gigging wasn't the issue - Lampanelli puts little effort into her wardrobe when she tours with her comedy show.

But as Lampanelli became more successful, there were more nationally televised appearances, movie premieres, and prime-time comedy roasts. She needed a look, which is why she wound up in Boston working with local designer Cibeline Sariano.

"Comedy, to me, no effort. This looks [stuff]? effort," Lampanelli said.

For four years, Lampanelli - who performs Saturday night at the Wilbur Theatre - has worn a uniform of loud, 1950s-style house dresses, all made by Sariano. Colors range from baby blue to bright pink. They match Lampanelli's hair, which on special occasions is usually coiffed in an anachronistic bouffant flip.

Or as Lampanelli puts it, "June Cleaver on crack."

Drug references aside, Lampanelli's style is just loud enough to be noticed - without being an eyesore. The comedian says she has Sariano's dresses to thank for the balance.

"I never wanted to be 'Oh my God, what a drag queen,' " Lampanelli explained in a phone interview. "It's not costume-y. That's the thing. They're character-y without being costume-y."

Sariano, who recently moved her retail store Cibeline from Davis Square to posh Charles Street, was hired by Lampanelli in 2005. Lampanelli already had a partnership with stylist Andy Paige, who was featured on the reality television show "Starting Over." When Paige needed a last-minute dress to wear to a high-profile benefit, she found Sariano through mutual friends.

Paige liked Sariano's work and connected her with Lampanelli.

As it turned out, Sariano and Lampanelli had both attended Syracuse University. (Lampanelli went to Syracuse to study journalism after a stint at Boston College.) They were both blond and brash. Lampanelli felt comfortable in Sariano's hands.

"She works well with people who aren't a size 0," said Lampanelli. "She just really got the body type."

After the first dress, the partnership became more frequent. Lampanelli, who was then living in Connecticut, would travel to Boston so that Sariano could size her up and come up with dress designs for upcoming events.

The two now plan outfits months out. Sariano has made about 25 dresses for Lampanelli, including a mermaid-inspired dress for the Comedy Central roast of Flavor Flav and the Pucci-esque wrap dress she wore for her HBO special "Lisa Lampanelli: Long Live the Queen." Last Sunday, Lampanelli sported a Cibeline original at the taping of a Comedy Central roast of Larry the Cable Guy. It was a pink camouflage number that Sariano originally designed for Lampanelli to wear to a roast of Willie Nelson. The roast never happened - Nelson backed out - but Lampanelli said the design seemed just right for Larry. The special airs March 15.

Sariano admits her work for Lampanelli has inspired her regular clothing line. She would never expect the women who wear her designs to buy into the loud, '50s-style dresses, but Lampanelli's look has had her doing more with stretch fabrics and sleeves.

Not surprisingly, Sariano is open to taking on more celebrity clients.

"I would love to work with musicians," she said, adding that she's a big fan of Richard Tyler, who has designed for celebrities such as Rod Stewart and Tina Turner.

Unfortunately for Boston fans, Lampanelli will not be wearing a Sariano creation during her gig on Saturday at the Wilbur. She says she's too lazy to dress up for a show that won't be televised and will wear her touring uniform, which is whatever she feels like putting on.

"I will be wearing something straight out of . . .," she said, adding a few expletives. "Get used to it."