Occupation: Defenseman for the Boston Bruins

So what are you wearing in this picture? It's a gray suit by Zegna, shoes from , a shirt by Faconnable, a Burberry belt, and the tie's Armani.

That pretty much covers it. Are you married? Yes.

Does your wife dress you? No. She hasn't bought me a stitch of clothing since we were married. If I'm going to wear it, I'm going to buy it.

Where do you shop? I work with a tailor in New York. His name's Domenic Vacca. He owns a place called Giovanni that caters to a lot of athletes. He meets you in the town you're in, and then works with you, choosing suits and tailoring them. I meet with him three or four times a year, and I've been using him for five or six years. For me, he makes custom-tailored overcoats.

He also works with some of your teammates? Yeah. . . . He makes golf shorts for [Marc] Savard. With builds like ours, hockey players have a hard time fitting properly into suits off the rack.

Do hockey players, like the guys in the NBA, dress up when they travel? Yes. It's actually a little more rigid. We're required to wear a suit and a tie.

But aren't hockey players just big, sweaty brutes? Actually, we're pretty fashion-forward guys. It's the heavy European influence, guys who've come over to the country. There's actually kind of a competition in the locker room to outdo the next guy in terms of getting dressed. I spent so much time in Detroit [on the Red Wings] with Russians. Those guys love Prada and Versace. Igor Larionov used to say, "If you look like a professional, you'll be treated like a professional."

P.J. Axelsson is pretty stylish, isn't he? He's the furthest extreme. He wears - how do I put this? - the most risque outfits. He stretches the possibility of the dress code. Michael Ryder and Marco Sturm pay attention to their look.

How would you characterize your style? "Boston Legal"-esque.

The TV show? I admire the way the guy from "Boston Legal" dresses. You know, the lead character, Alan Shore? He's always got a nice striped tie and bold colors, but it's not overstated. I like to dress with a little flair.

Have you always been interested in fashion or just when you got some money? I had one of those fathers. Most fathers would go to their kids's games in jeans. My dad was always done up in a tie or a sweater vest. He was a lawyer, and he always admired the English look, with the tie right up to the neck.

Who are your favorite designers? I don't have a pencil-neck body, so I don't fit into, say, Prada. [Hugo] Boss and Zegna work across the board for me, and Ted Baker ties. You can't go wrong with a Ted Baker tie.

What's the item in your closet you couldn't live without? My Breitling Montbrillant watch. 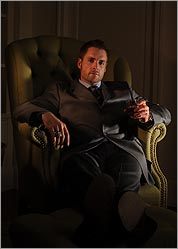