25 Most Stylish Bostonians of 2008 -- Kelly Smith and Chris Grimley 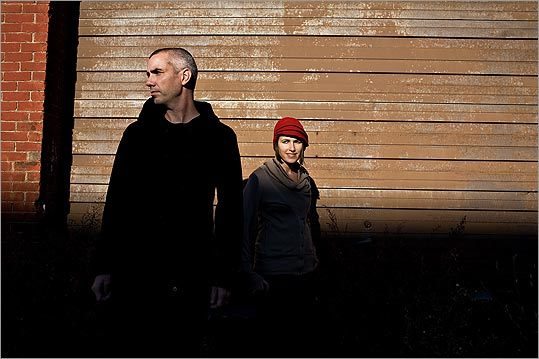 How would you describe your style? Smith: Simple, comfortable, pretty casual. I rarely ever wear heels.

What inspires your product design? Grimley: There's a sensuality to the material that you could ascribe to a Scandinavian feel from the 1960s and 1970s. And also Finnish and American architects.

Chris, you said most things in your closet are black or gray. Why do you think that is? Are you a depressed guy? Grimley: A couple of reasons. Old Goth roots, which are hard to break. And then on "Project Runway," season two, someone asked Michael Kors why he wore black T-shirts and jeans all the time. He said when he gets up in the morning and thinks about all the things he has to work through in terms of design that the last thing he wants to think about is designing what he's wearing. That's exactly how I feel. It's also just an easier way to think about not coordinating.

Have you always been aware or interested in fashion? Grimley: I think so. I grew up in Toronto, and there was a thriving vintage clothing scene there in the early 1980s and early 1990s. There were two annual vintage clothing sales. I was always intrigued by the manner in which things were put together. My dad's an interior designer, so I've always been aware of design.

Do the two of you inspire each other in your work and also in the way that you dress? Smith: Definitely. In terms of clothing, Chris is always finding things and showing me. And I do the same for him.

What are some of your favorite places to shop? Grimley: Parlor is a big one. We love our friends at Vessel. Smith: And Urban Living Studio. They carry our products there, too.