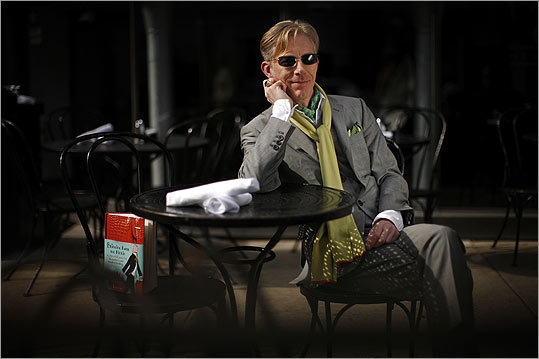 Author Michael Tonello says when he brings a Birkin to an event, "it gets more attention than a newborn baby." (Dina Rudick/Globe Staff)
Email|Print|Single Page| Text size – + By Christopher Muther Globe Staff / April 17, 2008

The animated and charming man who gingerly picks at his club sandwich at the Taj Boston appears to be an ordinary - albeit a spectacularly attired - diner. But Michael Tonello once enjoyed a power that few in the world could match. For nearly 10 years he supplied some of the world's wealthiest women with one of the most in-demand and expensive purses on the planet: the Hermès Birkin bag.

The pricey status bag known as the Birkin starts at $7,500 and is sold in limited numbers, much to the chagrin of wealthy style mavens and their over-extended sisters around the world. The bag is often seen adorning the arm of celebrities such as Victoria Beckham, Oprah Winfrey, Katie Holmes, Sofia Coppola, and Nicole Richie. Designed by breathy French singer Jane Birkin and Hermès president Jean-Louis Dumas-Hermès in the mid-1980s, the oversize purse has enjoyed a 20-plus-year run as an almost unobtainable cult fashion phenomenon.

"Mystical is a good word to describe them," says Tonello, a Massachusetts native whose new book, "Bringing Home the Birkin," hits bookstores Tuesday. In it, he details his years spent chasing down Birkins all over the world for wealthy clients. "Most people have never seen the bags in person. It's this magical, unobtainable piece of luxury that women dream of owning. When I bring a Birkin to an event, women go crazy over it. It gets more attention than a newborn baby."

From his home base in Barcelona, Tonello obtained Birkins and then resold them on to women who had no interest in waiting two years for one of the handmade bags, and who didn't mind dropping a few thousand extra to get the purses into their well-manicured hands a bit more quickly. While the bags start in the four figures, Birkins sell for up to $150,000 (that's for the ultra-rare crocodile and diamond Birkin).

In his book, Tonello, 49, an Osterville native, reveals how he cracked the code for jumping the waiting list to purchase Birkins whenever he pleased. Naturally, this code has something to do with large amounts of cash. When Tonello first attempted to purchase a Birkin at Hermès, he was told that the store had none available. But when he later visited a store and spent thousands on Hermès merchandise such as scarves and jewelry, he found that stores would suddenly have the coveted Birkins in stock.

"I have seen this on more than one occasion," he explains. "Someone walks into Hermès, asks for a Birkin, and is told 'I'm sorry. We don't have any. There's a two-year waiting list.' Meanwhile, there is someone else in the store buying a dress, a blouse, or a pair of shoes and a wristwatch. They are pulled aside by a salesperson and told 'A client ordered a Birkin bag two years ago, and her bag has come in. She chose not to buy the bag. Would you be interested in seeing it?' Of course that woman is going to say yes. My book basically proves the waiting list is bogus."

This was the situation that Tonello says he found himself in repeatedly as he traveled the world visiting more than 100 Hermès stores to stock up on Birkins for his clients. He bought them for everyone from celebrities to high-powered executives, he says. He followed the formula - buying Hermès merchandise while dressed like deposed royalty - and was then offered the opportunity to buy Birkins, which he always did. He found there was an unending appetite for the bags from his eBay clients. In one year, Tonello spent more than $1 million at Hermès. He declined to say how much he made from his eBay business, but added with a smile, "I made enough to buy this $5,400 Thom Browne suit I'm wearing."

Tonello's arrival into the high-powered and profitable world of Birkin buying was completely by accident. After growing up on the Cape, he entered the fast-paced world of makeup, working at Chanel and Christian Dior. In the 1980s, he was one of the founders of Team, an agency that represents hair and makeup artists and stylists.

But after falling in love with Barcelona, Tonello moved there in 1999, and learned that he could make a living by reselling luxury goods on eBay. He is a natural storyteller, and over the course of a two-hour lunch at Taj, he tells of his adventures with teases such as, "Do you want to hear a really juicy story about counterfeit Birkins? Buckle up, you're going to love this one."

A spokeswoman for Hermès said there is no system or trick for purchasing a Birkin. She said it's simply a matter of forming a relationship with the store and working with an associate to track down one of the bags when they become available. Because the bags are handmade, she said there are limited numbers available. A single Birkin - depending on the material - can take up to a week to complete.

"There was a waiting list at one time," says Bernice Kwok-Gabel. "But we realized the whole concept of a waiting list may be off-putting for some customers."

But those who own the bags don't mind the effort involved in obtaining them. Ashley Bernon, a Boston real estate agent and fan of Hermès, selflessly handed over her Birkin after her mother lost her wardrobe when she was evacuated from New Orleans during Hurricane Katrina. The power of the Birkin is so strong that even in her yoga clothes, Bernon's mother receives admiring looks from strangers when toting it.

"It's a statement piece," says Bernon, who plans to buy another Birkin herself. "It's really timeless, which means you can carry it no matter what you're wearing."

It is a status bag that says "I have the discretionary income to spend thousands on a purse," but why is the Birkin coveted by so many? Cameron Silver, owner of the posh Los Angeles secondhand boutique Decades, raves about the quality of the bag. He seeks out Birkins to sell in his store, and marvels at the fact that the bags are still produced with the same saddle stitch that the company developed in the 1800s.

"It's the ultimate handcrafted handbag that's free of logos," he says. "But it's identifiable to those in the know. It's the antithesis of an 'it' bag, and that's why I think it's remained sought after for so long. It's not susceptible to trends the way a lot of handbags are."

Mica Bonner, a Hermès scarf collector in New York who runs a chat group on Hermès sums it up a bit more succinctly.

"I think there's a love of Hermès, particularly the Birkin, because it's a case of people wanting what they can't have," she says.

Tonello's book is part "Talented Mr. Ripley," and part "Three Weeks to eBay Profits." The movie rights to "Birkin" were recently sold, and Tonello is now working on a children's book that focuses on cats as opposed to handbags.

One thing about Tonello's career path is clear: He cannot go back into the business of reselling Birkins.

"I got an e-mail from a client last year asking if I could get her a white Birkin or a Kelly bag," he says, referring to Hermès' other coveted bag. "This was after news of my book first appeared. I was going to use the formula. So I picked up a few beach towels and then I asked about a white Kelly bag that was on display. The salesman said to me 'I'm sorry Mr. Tonello, that bag is reserved. In fact, every bag in the store is reserved.'

"At that point, I knew I was out of the Birkin business."