She's Posh, whatever she wears

Victoria Beckham, perhaps better known as Posh Spice or Mrs. David Beckham, is just a few hours from show time. It's the last night of the Spice Girls' two-week concert run in London, part of a reunion tour that arrives in Boston next week. But Beckham, who purloined Vogue editrix Anna Wintour's trademark bob, oversize sunglasses, and pout for her own fashionable gain, is more interested in chatting about shopping than "Spice World."

"We help each other out when it comes to clothes," she says of her soccer-star husband, who last year landed a $250 million contract with the Los Angeles Galaxy. "And we shop for each other as well. Just don't tell his teammates."

A staple at fashion shows in New York and Paris, Beckham appeared in ads for designer Marc Jacobs, graced the cover of this month's Elle, has written a book of fashion tips ("That Extra Half an Inch"), and is designing her own dVb line of denim (below left) and sunglasses. Beckham will greet fans at Saks Fifth Avenue on Wednesday at noon and chat about her jeans. We dialed her up in advance to query her about Katie Holmes and past Spice Girls fashion atrocities. - CHRISTOPHER MUTHER

When I see you in paparazzi pictures, it seems like you're usually wearing Dior or Cavalli instead of jeans, so I'm wondering where the interest in denim comes from?
To be honest with you, I've been photographed in lots in jeans. I love fashion, from jeans to couture to nice day dresses. I couldn't find a good pair of jeans. I was very specific about what I wanted, and I couldn't find it, which is why I decided to go into making jeans.

How involved are you in the design of the denim and the glasses for dVb?
I'm very involved right from the start. There's not a button or a rivet that goes on a pair of jeans that I haven't seen or approved. I test everything on myself. I don't just put my name on things. I pick all the denim myself. For me, that's fun. That's why I'm doing this.

I thought you were doing it because you needed the money. I heard David's soccer contract wasn't very lucrative, and you're not making much from the reunion tour.
(Laughs.) Listen, if that were true, I'd be selling it in a lot more stores. That's been the great thing about the position that I'm in. I haven't had to sell out. For me, it's so exciting. We're in the best stores in the world.

Will you eventually introduce other lines, such as your own ready-to-wear line?
Yes, I've been thinking about it for a long time. I'm just putting a team of people together now. So it will be my main project when I finish this tour in a month's time.

On the current tour, all the girls do a solo number, but you stroll the catwalk instead of singing. Was it your decision to emphasize fashion over music?
I've had solo records that have been very successful, but I'm not in the music industry anymore. I'm in the fashion industry. I was very nervous about going back into the Spice Girls, because I didn't want to send out a confused message. The reason I decided to do this tour was to show my kids that mummy was a pop star once. It's the last opportunity that there will be to see the Spice Girls together.

Ever since you and Katie Holmes became friends she has started dressing like more of an adult and less like Joey from the Creek. Is that your influence?
Katie and I have hung out, we've been shopping together, and we've been to fashion shows together. Katie has a fantastic sense of style. I don't think I particularly influenced her.

Is there a particular outfit from your Spice years that you look back on and just kind of cringe?
I like to think it was all good at the time. But I'll look at the makeup and think 'My God, look at all that bloody makeup' or 'Look at that hair.' So I'll cringe a little bit. When I look back on all those pictures, I realize that's what made me who I am now. I'm proud of that. 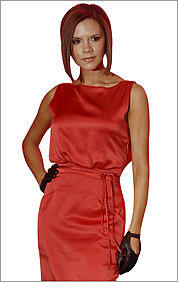