First came the salons. Then boutiques, spas, and TV. So what's a typical week like for Gretchen Monahan? 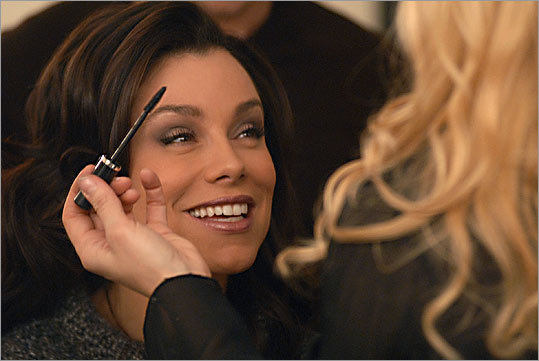 Gretchen Monahan gets made up before appearing on the "Rachael Ray" show in New York, where she is a style expert. (Joe Tabacca for The Boston Globe)
Email|Print| Text size – + By Suzanne C. Ryan Globe Staff / January 17, 2008

The entrepreneur behind the Needham-based Gretta Enterprises owns three local salons (Grettacole), two clothing boutiques (Gretta Luxe), and a spa called G Spa. She appears weekly as a style expert on "Rachael Ray" in New York and locally on Channel 7 for a segment called "Gretta's Got It."

But that's just the start. Monahan, 37, is also a design consultant for shoe brands Via Spiga and Naturalizer. She's creating her own line of beauty products, launching a line of shoes, and writing a how-to book on dressing well. She's broken ground on a new spa at Foxwoods. She's a consultant for Dove's hair-care line. She's a stylist for celebrities like Billy Joel.

And in what may be the single best indicator of her entrepreneurial relevance, Monahan, known as Gretta to her fans, was the subject of a case study at Harvard Business School. That was three years ago, when she was all of 34. Corporate revenues then? A cool $10 million a year, the study said.

In her humble fashion, Monahan downplays her success. "We all take on challenges. Hopefully, it stretches you." She continues: "Not every day is a good day. Some days, I'm pushing through on fumes."

To get a sense of just how many projects Monahan is juggling, we tracked her whereabouts for seven days. It wasn't easy. She's on the move from dawn till midnight most days. The week we checked in, right after Thanksgiving, she traveled from New York to San Diego to Los Angeles and back, stopping along the way to meet with skateboarder Tony Hawk, hit a red-carpet event, tape several TV shows, dine with celebs, and shoehorn in a few hours of sleep. Though we're not sure about the last one.

Thursday, Nov. 29, 2007:
10 a.m., Manhattan. Monahan is at the midtown studio where the "Rachael Ray" show is shot. She's about to meet with her producer to discuss her trip to San Diego tomorrow. "We're helping a single mother and her four kids whose house burned to the ground in the devastating wildfires," Monahan says. "They had less than five minutes to get out of their home. Now, they're living in a barren apartment. Target gave us $5,000 to help them. But we have other surprises in store, too."

2 p.m. Monahan has an appointment with her agent at the William Morris Agency. On the agenda? Her plans for a book. "I want to present an easy, affordable way to have high style on a low budget. I'd like to think the book will come out in about 18 months."

4:30 p.m. Conference call with employees in Boston about a charity fashion show for the Faulkner Hospital.

8 p.m. Monahan picks up Rachael Ray. They're heading to Capitale for the DogCatemy Awards, a red-carpet gala to raise money for New York's North Shore Animal League America. Ray brings her pit bull Isaboo, whom Monahan has dolled up with a gold metallic leash and collar. Monahan walks the carpet with Billy Joel's pug, Fanula. It doesn't go so well. "She pulled a diva move on me and got nasty with the other dogs," Monahan says.

12:30 a.m. Finally home at her Greenwich Village loft (she also has a condo here at the Ritz Carlton Towers), Monahan packs for San Diego and checks e-mail on her iPhone for the last time that night. Lights out at 2 a.m.

Friday, Nov. 30:
8:30 a.m. Monahan's already on the phone with an executive from the MGM Grand at Foxwoods in Ledyard, Conn. They discuss details about the opening of her new spa there in May, including the menu and the equipment.

9:30 a.m. She leaves for JFK Airport. The San Diego flight departs at noon.

9:30 p.m. After her flight was delayed, a tired Monahan checks into the Hilton Garden Inn in San Diego and immediately heads to the lounge. "My producer has already called 16 times. She's like, 'Where are you?' We have to go over tomorrow's schedule. I'll be in bed by 11:30, not too late."

Saturday, Dec. 1:
5:15 a.m. On the hunt for coffee. "The guy at the front desk took me in the back for coffee and a box of Cheerios. I always bring a protein bar too."

6:45 a.m. Show time. Monahan walks into the townhouse of Patty Grant and her children Elise, 15, Mitchell, 13, Jonathan, 11, and Brian, 7. She announces, with cameras rolling, that they're all headed to Target to spend $5,000 on clothes and toys. Chaos ensues. "It was classic," Monahan says. "They all started crying. The boys started hugging my legs. Forget about giving a gift. To actually be there is a very different feeling."

11 a.m. Monahan ignores the gawking shoppers at Target and helps Elise pick out a dressy outfit for an upcoming semiformal dance and some casual things. "We got her her favorite brand of jeans. It's the little things people miss."

1 p.m. Surprise! Patty and Elise are going to a spa, all expenses paid. Monahan and the boys are going to meet skateboard icon Tony Hawk at his private skating facility. "Tony brought his sons and he gave them all lessons and let them skate for a couple of hours. It was amazing."

7 p.m. Monahan returns to the family's place, which has been decorated with a Christmas tree and the trimmings while they were out. As a parting gift, the family learns they've been given a seven-day Disney Cruise.

10:30 p.m. With the taping finally done, Monahan and crew stop at a hole-in-the-wall Mexican restaurant. "When I'm in California, I have to get Mexican food," she says.

12:30 a.m. Monahan arrives at a friend's house in Pasadena. "She insisted that I stay with her and skip the hotel."

Sunday, Dec. 2:
7:30 a.m. Monahan leaves for a 10:30 a.m. flight out of Burbank. Bad weather in New York delays her flight for hours. Monahan befriends a writer from Business Week and together they watch a football game in an airport bar.

Monday, Dec. 3:
6 a.m. Better Homes & Gardens is doing a photo shoot in Monahan's loft on how to cover gray hair and still look natural. Monahan will color the hair of two models, while the photographer captures every step. She, however, won't get the same treatment. "I have to have my hair and makeup done [by the time] they arrive," she says.

6:30 p.m. Monahan dashes out the door to meet her friend Giada De Laurentiis, host of the show "Everyday Italian" on the Food Network. De Laurentiis has scored virtually impossible-to-get reservations at Rao's in East Harlem. The co-owner, Frank Pellegrino, treats them like royalty. "When he saw Giada coming, he started singing to her and the whole dining room," Monahan reports. "He announced, 'I get to cook for her tonight!' There's no menu. They pull up a chair and ask you what you want. I thought I was an extra in a movie."

11:30 p.m. Monahan wants to wave a white flag, but Pellegrino won't stop sending out food. "I begged them to stop. He wanted her to try everything." That included meatballs, filet of sole, risotto, broccoli rabe in pasta, seafood salad, green salad, red peppers, and pine nuts. "It was honestly insane."

Tuesday, Dec. 4:
7:30 a.m. Breakfast at Michael's with Terri Rawson, senior VP of marketing for Brown Shoes, a retail and wholesale shoe company. "I used to do Terri's hair in Wellesley at Grettacole. Now I am a consulting designer for Via Spiga, which Brown owns. I have my own Gretta line of shoes that QVC bought. It will launch May 3. When I saw the shoe box with my name on it, I almost fainted."

9 a.m. Monahan goes to see samples of the 15 shoe styles she created for Via Spiga. "I sat in with the buyers from Saks Fifth Avenue who were viewing the fall 2008 collection," she says. "They didn't know who I was. I was so nervous to see their reaction. They went up and grabbed my styles first. I had to leave the room. I was beside myself."

Noon: Back at the "Rachael Ray" studios, Monahan preps for an upcoming show on holiday-party dressing for under $100. She's supposed to dress eight models, but she doesn't like all the choices in the studio. "I'm going out on foot to find some accessories and a dress," she says. "I'm going to Forever 21, , and probably H&M."

8 p.m. Dinner at the home of Billy Joel and his wife, Katie Lee. "She's debuting her recipes from a cookbook coming out in May," Monahan says. "This is a tasting."

Wednesday, Dec. 5:
7:30 a.m. The car service is downstairs. It's going to be a full day at the "Rachael Ray" studios. The first thing she does is meet Ray at the coffee counter. "She had on her bunny slippers and I had rollers in my hair. She gave me my Christmas gift, a helicopter tour ride through New York and a 'G' necklace that she had made. It's gold with a diamond. She calls me G. I'm still agonizing over what to get her."

9 a.m. In-studio filming begins on the San Diego segment. Monahan was disappointed that Patty Grant was not able to fly to New York for the taping but Ray has secretly arranged for her appearance.

8:30 p.m. She's running late. An executive from Brown Shoes is taking her out for dinner at Del Frisco's steakhouse to celebrate her new QVC line.

12:30 a.m. Monahan walks into the bar at the Royalton Hotel. She's having drinks with a different agent from William Morris who wants her to meet a young doctor who's being positioned as a potential expert for the "Rachael Ray" show. "She might be a great contributor on some upcoming health and beauty segments. . . . This is how business gets done in New York. It's a strange, strange world."