Mustaches cool? By a whisker.

Bushy beards have been the rage, but now another look is growing in popularity 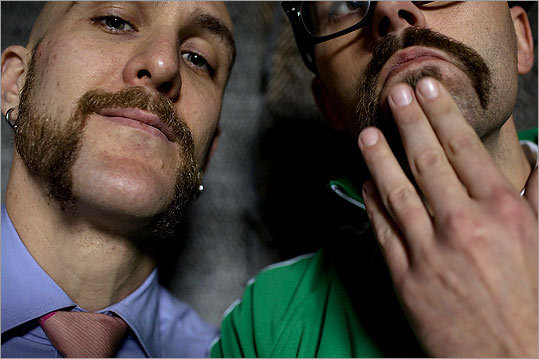 Groomed stubble is so passé. Indie rock beards, old hat. These days, it's all about the mustache.

There's Jason Schwartzman's recent turn as a moody, mustachioed Romeo in "The Darjeeling Limited." Drummer Jerry Fuchs of the dance band !!! sports a mustache so big it swaggers.

Atlanta garage rockers the Black Lips feature not one but two members - Jared Swilley and Cole Alexander - with droopy, yet strangely sexy, 'staches. Swilley, 23, says the same high school jocks who used to bully him now buy him drinks and compliment him on his fuzzy facial hair.

Swilley, a Civil War buff, likes the way it looks.

"It makes me feel good in a 19th-century colonial comfort kind of way," he says. "And my fiancée likes it."

It hasn't been that long since the mustache was in vogue, but its last ascendance was probably the 1980s, when Tom Selleck's "Magnum P.I." made it almost OK to have a bushy mustache, so long as you also drove a Ferrari and wore Hawaiian shirts.

While the '90s were more or less clean-shaven, the new millennium has been nothing if not hirsute. Scraggly beards have been de rigueur, especially among hoodie-wearing collegiate types, for whom grooming has always been somewhat discretionary.

Now, some local hipsters are going 'stache only.

One recent night, outside the Middle East in Cambridge, Mike Carreiro of the local agitprop punk band Oliver North was sporting a newly grown and very smart mustache. He was, however, ill at ease.

Brian Rand, a stylist at Shag salon (pictured on the cover), likes the attention he gets because of his mustache.

"People view me differently since I grew it," he says. "I'm not a very outspoken person and the mustache speaks first." Rand, 26, is a former beardy who now sports a commanding nose to chin 'stache. He shaved off his first one, but friends urged him to regrow it ASAP. "A mustache shows authority," he says. "It's classic."

Cyrille Conan and Mike DiMaggio, who are both artists with day jobs at A Street Frames in Cambridge, each wear big mustaches. And proudly.

"Mike's big biker-looking mustache goes with his tattoos," says Conan, 34. "Mine's more of a dandy Fu Manchu look. I trim mine myself, but when it goes awry I go to State Street Barbers in the South End and get it professionally done. It's the guy's version of getting a pedicure."

Conan agrees that the mustache does make an impression.

"People are definitely a bit weirded-out by big mustaches. I feel like an outsider anyway," he shrugs, "so I may as well look like one."