All made up and ready to go

Do cosmetics and exercise mix? Some say yes. 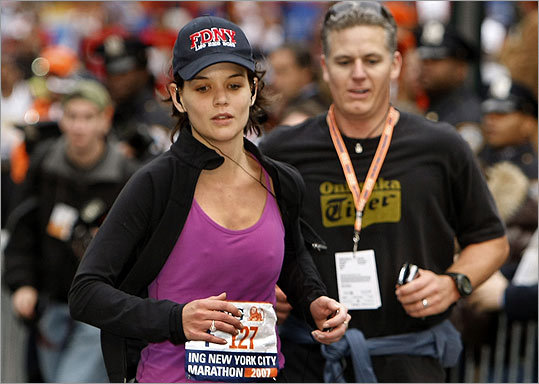 Tennis champion Serena Williams does. Olympic gold medalist and two-time Boston Marathon winner Joan Benoit Samuelson didn't, and still doesn't. And when actress Katie Holmes crossed the finish line of the recent New York City Marathon, she may have, judging by some photos.

Some female athletes leave their healthy glow to nature; others resort to . A visit to The Sport Club/LA on a recent Saturday morning turned up mostly bare-faced women who eschewed wearing makeup while working out. One woman, though, confided that she saw plenty of beauty products at the club.

"It's a social scene here, and women are looking to meet men," she said. Another be-rouged athlete requested anonymity, not wanting to be known as "the woman who wears makeup to exercise."

It doesn't have the taboo of steroids, but eye pencil does underline a philosophical divide. Some women believe that wearing makeup while exercising is a ridiculous contradiction, a superficial gloss on their athletic strength, drive, and competence. For other women, cosmetics and gym shoes are, well, no sweat.

Renu Shukla, interval and race day training instructor at Spynergy Cycling Studio in Wellesley, looked so perfectly coiffed after leading an intensive workout that she could have headed to a cocktail party. Her secret: "You have to wear a bandana, which contains the trickle of sweat down your face so your makeup stays." Why the effort? "I feel naked without makeup. I'm the face of the class, and makeup gives me added confidence. It's about projecting wellness and a healthy image."

That's true, according to research by anthropologist Dr. Nina Jablonski at Pennsylvania State University, author of "Skin: A Natural History." "People use cosmetics for temporary alterations to announce their attractiveness, mood, or sexual availability," Jablonski told The .

While decorating our faces has anthropological roots, when it comes to routine exercise women seem to be focusing less on a matte finish than on a mat to finish their abdominal work.

"In the last 10 years, women have not been wearing much makeup when they work out," observed Julia Upjohn, a spa director at Bosse Sports in Sudbury. "We don't see much more than tinted moisturizer. Twenty years ago, women were wearing more. Looking good is very important to women, though, and now it's about the fit and cut of their workout clothing."

Before marathoner and triathlete Patricia Hambrick of Weston hits the road, she applies only sunscreen or, in the winter, Bag Balm, a salve created to soothe irritation on cows' udders. "It's gross, but you need to protect your skin so you look more beautiful when you're not running."

"Sunscreen is a must if you're exercising outside, and some makeup contains sunscreen," according to dermatologist and marathoner Dr. Robin Travers of SkinCare Physicians in Chestnut Hill. "But if you're prone to acne, wearing makeup will make it worse because sweat combined with oils and powders can clog your pores."

Still, Travers herself always wears lipstick when she runs. "I have to wear lip balm with sunscreen anyway, so why not wear some with tint? I channel Kathrine Switzer, the first woman to officially enter and run the Boston Marathon (in 1967)." Switzer wore lipstick, though her boyfriend warned her to remove it because "somebody might see you are a girl and not let you run," she recounted in her book "Marathon Woman." She was nearly thrown out by a race official.

"In the early days, I was trying to show people that you can be feminine and still be an athlete," Switzer said. "That's not an issue now. In industrialized nations, we revere our women athletes and don't feel that they're any less feminine because they're not wearing makeup. But I like dressing up and looking good, so in a race I always wear makeup. When I train alone, though, I don't - unless I'm with my husband and planning a seduction afterwards."