When we shield our kids from scary stories, who are we really trying to protect? 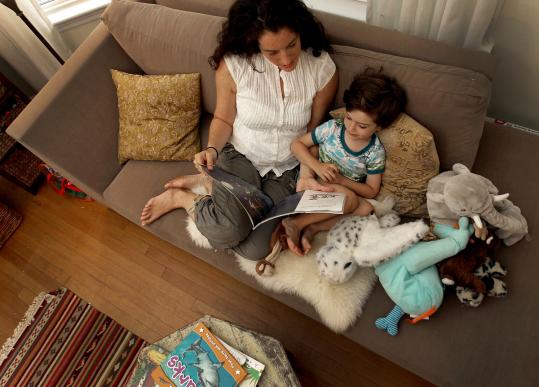 On the seventh page of “The Story of Babar’’ by Jean De Brunhoff, the little elephant is riding on his mother’s back when something awful happens: “a wicked hunter, hidden behind some bushes, shoots at them. The hunter has killed Babar’s mother!’’ The pictures tell the rest of the story - we see Babar happily atop his mother in one scene, crying by her side the next. The first dozen times I read the book to my son, when I reached that two-page spread, I would pinch the pages together to turn as one, and then skip on ahead. One night, though, when I was out of the house, his father read him “Babar’’ at bedtime.

We exchanged some unpleasant words, and I was left to ponder why I’d been so afraid to read my son this page of “Babar.’’

It’s become a cliche that today’s parents are hovering helicopters, rushing to shelter children from even trivial harm. A recent paper by two Norwegian researchers suggested that well-meaning adults cripple kids’ abilities when they try to make playgrounds safer, since “risky play’’ presents children a crucial and necessary opportunity for growth and development. Such protectiveness extends beyond swing sets and slides, reaching into perilous pantries (high-fructose corn syrup!), the Internet (pedophiles!), and even the family bookcase - (death! sex! racism!).

Andrea Meyer, 43, of Cambridge, says she skips over passages of books she fears will frighten her 3-year-old son, Aidan. One favorite read focuses on sharks, which mentions that they sometimes eat people. “I just cut that part out,’’ Meyer says. “I don’t want him to be afraid of swimming in the ocean.’’

It’s not surprising that many of us find ourselves censoring - even if we’re embarrassed to do it. Even a quick look at the most enduring children’s books reveals that there’s no escaping loss, danger, violence - all figure in some of the best children’s books of all time. And then there’s death, which Maria Tatar, chair of the program in folklore and mythology at Harvard University, calls “that big theme so strangely prominent in children’s literature.’’ There’s a reason for that.

“If you look at all the old fairy tales, and even the current ones like ‘The Lion King’ or ‘Finding Nemo,’ ’’ says Lise Motherwell, a Brookline psychologist, many “deal with the loss of a parent, often the mother.’’

These stories are popular with kids because of their subject matter, not in spite of it. “Those are questions and issues that kids are dealing with anyway and in many ways reading in books helps them deal with it on a developmental level,’’ says Motherwell. “They start to grapple with the feelings they would have if something like that were to happen.’’

In fairy tales it’s a given: No adventure can take place until the mother leaves the scene. It’s a classic tradeoff: You can have either a mother or an adventure, but not both. And it doesn’t seem to upset young readers as much as it does their mothers.

“I understand the instinct,’’ says Motherwell, “because parents want to protect their children.’’ But if a child loves a book, he or she wants “to read it over and over . . . because the very fear that they’re dealing with is something that they just keep re-experiencing, and then they metabolize it and are then able to manage those feelings.’’

“Sometimes kids are trying to navigate not just reality but all the mysteries out there,’’ Tatar says, “the adult mysteries about birth and death and everything in between.’’

Judith Schickedanz, professor emerita in the school of education at Boston University and a consultant to PBS children’s programming, says, “It’s really important to keep in mind that the child from 4 to 8 is really old enough to have quite a bit of information about reality - that adults can die and that includes their parents - but what they don’t have is a sense of probability.’’ It’s up to parents, she says, to provide a context to help their children handle ideas that both fascinate and terrify them.

Tatar urges parents not to overthink it; kids are “wonderfully curious. They are more intelligent than we give them credit for.’’

Some parents seek to shield their kids from less existential hazards. Erin McLaughlin, 34, of Cambridge, recently found herself “taken aback’’ by scenes in “Ramona the Pest’’ in which Ramona tackles and kisses her kindergarten classmate, Davy. Reading the book to her 5-year-old daughter, Geneva, McLaughlin spontaneously revised the scenes to be about a game of tag, instead of the “stereotypical boy-girl interactions’’ that felt inappropriate.

Some parents feel that they should choose books that provide a useful lesson (“tell the truth,’’ “use your words,’’ and so forth). But Tatar says, “I never worry about morals. I am much more worried about books that fail to stimulate the imagination, that bore children and turn them off to reading.’’

For Jessie Bennett, 39, of Belmont, reading to her 5-year-old son, Nathan, was an opportunity to revisit the beloved books of her own childhood, including the “Little House’’ series by Laura Ingalls Wilder. “I really loved them, and I still love them,’’ she says, “but there are some really troubling things’’ she hadn’t remembered from her earlier readings of them, in particular the way the books talk about Native Americans. “The sad fact is that the history of our nation is a difficult history,’’ Bennett says, adding that she tries to add age-appropriate context to help her son understand, rather than censor as she reads - until she came to one word too loaded to explain. “I kept skipping over ‘savages’,’’ she says, “which is hard now because Nathan can read!’’

Julie Roach, a children’s librarian at the Cambridge Public Library, says that it’s better to choose the right book than to edit as you read. After all, “when you’re sharing a book, you’re sharing that author’s words.’’

Roach suggests asking your local children’s librarian or book seller - tougher and tougher to do as bookstores close - or consulting a guide to children’s literature, such as the recently published “A Family of Readers: The Book Lover’s Guide to Children’s and Young Adult Literature’’ (Candlewick, 2010), compiled by Horn Book editors Roger Sutton and Martha V. Parravano.

Schickedanz agrees that parents need to choose wisely for their particular children, whom they know best. Once reading, parents can focus on adding more than taking away. Most parents edit as we read to our kids. “When we read to children we can put all kinds of things into context,’’ she says.

An appropriate book, according to Motherwell, will “match not only the child’s intellectual age but also their emotional age.’’ In other words: Don’t rush to read “Harry Potter’’ to your 5- or 6-year-olds, no matter how smart they are.

“There’s a purpose to reading to kids,’’ Motherwell reminds us, “both an emotional purpose and an intellectual purpose.’’ Kids want to hear the same books over and over “because they’re working through whatever the emotional issue is.’’

While their children work on emotional issues, it’s a chance for parents to explore theirs as well. “I think I’m doing it out of wanting to protect him - but maybe I’m trying to protect myself, or misperceiving what he needs protection from,’’ Andrea Meyer says.

Learning that Babar’s mother was killed didn’t scar my son. He still asked for the book again and again, experiencing and re-experiencing a very scary thing from the very safest place he knows - his mother’s lap.

Kate Tuttle, a writer and editor, can be reached at Kate Tuttle@gmail.com.