Snow days. Sick days. Working-from-home days. This winter, tv has been a lifesaver for parents. Only now kids don’t want to give it up. 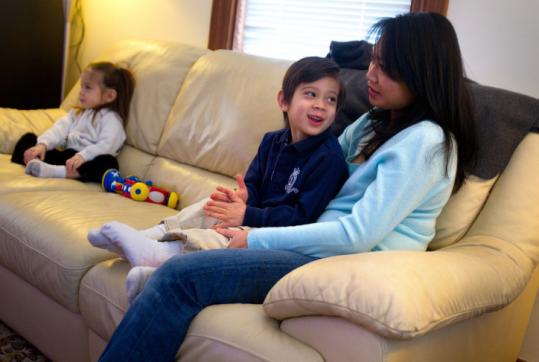 During a winter of watching more TV than usual, Ngan Wedemeier of Wakefield joins her children, Nicholas, 4, and Madeline, 2, in watching their favorite show, “Super Why!’’ (Dina Rudick/Globe Staff)
By Beth Teitell Globe Staff / March 1, 2011

As snow day piled upon snow day, and intense cold and icy roads made playing outside and visiting friends difficult, Melissa Morse, a Reading mother of two, found herself relaxing her one-TV-show-per-day rule for the kids. She doesn’t like to admit it even to herself, but some days her preschoolers watched two hours of TV.

Now she’s finding that peace came with a price. Her children — like countless others — now need to be weaned from ramped-up screen habits that have developed over weeks and weeks of forced indoor time this winter.

“The first thing my son said when he got up yesterday was, ‘I want to watch ‘Peep [and the Big Wide World],’ ’’ Morse recalled. “We’ve got to fix something,’’ Morse told herself, vowing to take her children to the park. “It’s now or never.’’

The American Academy of Pediatrics recommends that children under 2 avoid TV and video watching, and that older children keep total daily screen time to under two hours of quality programming per day (not counting Web use for school purposes). But this winter has tested even the most determined parents. In and around Boston, snow has canceled five days of school — and a frightening number of extra-curricular activities. Stay-at-home parents eventually ran out of craft ideas. Working parents, toiling from home, were desperate for quiet so they could deal with office demands.

And so, the electronic baby sitter ruled.

“How many games of Monopoly can we play?’’ asked Amy McCready, the founder of the Raleigh, N.C.-based Positive Parenting Solutions, which teaches parenting skills both in person and online.

But each concession, whether it’s allowing a few more minutes of Madden NFL 11, the popular video game, or an extra episode of “Dora the Explorer,’’ digs a parent deeper in the hole, warns negotiating expert Greg Barron, a director at Lax Sebenius, a Concord-based negotiation firm, and a former assistant professor at Harvard Business School.

“The kids succeed in nibbling away at our resolve,’’ he added. “They just want an extra 15 minutes of Wii time. You figure that’s not the end of the world, but quite often we wake up a few months later with kids who are glued to the TV and the Wii, and for some reason we’ve agreed to this and we’re not quite sure how it happened.’’

The experts make staying away from the video-game console or TV set sound so easy. Barbara Turvett, deputy editor of Working Mother magazine, said there are lots of nonscreen activities kids enjoy, such as books or crafts. “What happened to the old stockpile of art supplies at home? It’s kind of a no-brainer to have old magazines to cut up, and some glitter glue and watercolors. Kids can be involved for a long time with stuff like that. They don’t need to be artists.’’

But art projects — as admirable as they are — don’t always provide the same break for parents as does a nice long viewing of “The Lion King.’’ Cheryl Fenton, of Medford, says the tiny sparkles her daughter was playing with one day only added to the winter stress.

“My mind couldn’t drift to work,’’ said Fenton, a magazine writer and author of EasyPeasyBlog.com. “I was constantly staring: Where are her hands? Where’s the jar? Where’s the top of the jar?’’

Other wholesome activities also came with a cost. “I must have gained five pounds during the storms,’’ she said. “We were constantly making cookies and muffins and bread.’’

So yes, she turned to the TV, with one hour turning into two turning into three, and now she’s paying the price for that, too. “If mom just let her watch six shows in a row, and then all of a sudden it’s only two, there was a little tantrum. I got the stinky eye. I got the arms crossed, and I might have gotten the foot stomp.’’

Fenton says she’s not only weaning her daughter off the TV, but weaning herself off relying on it. She’s still working on her laptop while her daughter’s home, but now she’s playing Candy Land simultaneously. “I’ve got to get used to having her back in my life, as opposed to in the TV’s life.’’

Michael Rich, a pediatrician at Children’s Hospital Boston — and the hospital’s “mediatrician’’ — said he regularly sees parents who are eager to break their children’s screen habits. The stress, he says, usually comes at the end of the summer, when “parents are terrified the kids are not going to do their homework or pass the MCAS.’’ The end of spring brings anxiety, too, he added, with parents concerned that their kids will fill school-free days with video games.

McCready, of Positive Parenting Solutions, recommends a “when, then’’ plan. She suggests the conversation with the child go like this: “When all the yucky stuff is done — your homework, your family chores, your backpack is ready, your clothes are out for the next day — then you can have screen time.’’

“If we slack on the rules we set, then they think everything is up for negotiation,’’ she said. If there’s complaining and grumbling over limited screen time, she advises, don’t engage. “Just walk away. They are trying to get you to change your mind, but you don’t want to do that. If you get sucked into a power struggle you may give in [and say], ‘OK, watch SpongeBob again.’ ’’

That’s a lesson Wakefield mom Ngan Wedemeier is taking to heart. After a winter of watching more TV than usual, her toddler has started protesting when the set is turned off.

“She’s doing the angry squawking and angry body language,’’ said Wedemeier. “The only thing I have going for me is that at this point she’s 2 and she has to go where I go. I’m very motivated to go out of the house.’’