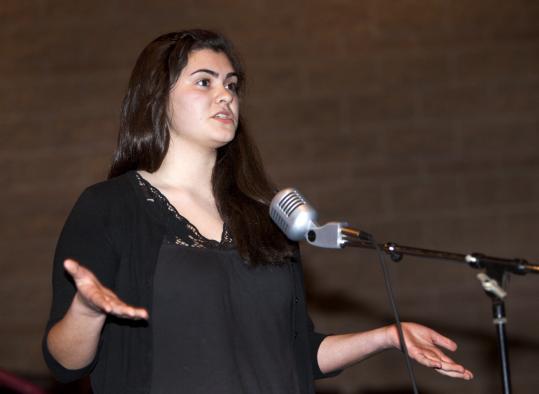 Molly O’Rourke-Friel, a senior at the Bromfield School in Harvard, said she and other students feel pressured to compete at the highest level. “The culture of anxiety is contagious,’’ she told a crowd at the school’s auditorium Thursday. (Ellen Harasimowicz for The Boston Globe)
By James Sullivan Globe Correspondent / January 24, 2011

HARVARD — Molly O’Rourke-Friel is a senior at the prestigious Bromfield School, a public school for grades 6-12 that is known for high academic standards. A member of the drama club and student representative to the town’s School Committee, she considers herself a healthy, well-balanced young woman.

But she often finds herself worrying alongside her peers, many of whom stay up late doing homework and studying for their school’s many tests. With expectations that they’ll be accepted into elite universities, she said, they feel pressured to compete at the highest level.

“The culture of anxiety is contagious,’’ O’Rourke-Friel told a crowd gathered in the school’s auditorium Thursday evening for a special screening of “Race to Nowhere,’’ a provocative new documentary that explores the side effects of a hypercompetitive school environment and the rise of testing standards across the country.

“Race to Nowhere,’’ which features interviews with students, parents, teachers, and administrators from Connecticut to California, argues that the high-stakes push to achieve has created a generation of high-strung students constrained in a “one-size-fits-all’’ system. It was produced and co-directed by a California mother of three who began the project when her own children developed symptoms of depression over their schooling.

At screenings like the one in Harvard and in dozens of other US cities and towns, the film has sparked deep discussions about the state of American education. In Massachusetts, home to some of the country’s top colleges and universities, the film has drawn especially eager audiences in such affluent towns as Concord and Weston, where upcoming screenings are already sold out. Showings in Cambridge, Newton, Hingham, and other local communities are scheduled in the coming weeks.

“Your presence says so much about how much education is valued in this community,’’ Bromfield’s principal, Jim O’Shea, said in brief remarks before the screening. Some in the audience of several hundred asked whether those values sometimes come at the expense of students’ well-being.

During a question-and-answer session after the film, Jim Ware, a father of twin girls at Bromfield, drew applause when he asked O’Shea and Superintendent Thomas Jefferson whether they would consider scaling back on the amount of homework the school’s teachers assign. In particular, he was dismayed that his daughters were required to do homework over a school vacation.

Sidney Cannon, whose four children attended a progressive Waldorf school before moving into the Harvard district a few years ago, said she has found the transition difficult.

“They’re not teaching the students how to learn,’’ she said, as her son, Lindsay, a junior at Bromfield, stood by her side. “They’re just cramming them with facts.’’

Unlike many of her fellow parents, who push their children to apply to the country’s top colleges, Cannon said she does not insist that her children participate in after-school sports and other extracurricular activities. “They do have a lot of down time,’’ she said.

Still, she admitted she sometimes gets caught up in the expectations: “I’m very concerned about my children’s grades, and I talk to them about having to play the game.’’ Like many of the families in the film, hers has dealt with diagnoses of clinical depression and attention-deficit disorder.

In the film, a guidance counselor bemoans parents’ use of flashcards for their toddlers “when they’re supposed to be sucking on their toes and thumbs.’’ Another claims that the current generation of students has not been given enough opportunity to explore “the fundamental question of adolescence: Who am I?’’

“These are human beings, not cars on an assembly line,’’ producer Vicki Abeles said by phone from her home in the San Francisco Bay area. “Do we want a generation of good test-takers, or people who can actually think and solve problems?’’

“I don’t want to put it all on the education system,’’ she said. “Schools are just a microcosm of the larger culture. We need to think about changing our mind set, and this film has the power to do that.’’

Abeles, who will be on hand at Amherst Regional High School to present the film on Feb. 2, said she has heard from several distributors interested in picking up the film for wide release. But she prefers the grass-roots nature of the screening series, at least for now, because that provides a forum for dialogue that theatrical showings might not.

In Harvard, one mother stepped to the microphone and explained how she had raised her children to decide for themselves whether they wanted to do their elementary school homework. Ilene Rodman, a guidance counselor in the Chelmsford school system, implored audience members to let their children see them make mistakes.

“Youths should see that the world doesn’t have to be a perfect place,’’ she said.

Dr. Madhavi Kamireddi, a child psychiatrist who was one of two panelists from the medical profession taking part, said parents must find a balance between encouraging children’s academic progress and their creative outlets.

The solution, she said, is not just to take away their challenges.

“I don’t think any of you would have accomplished anything if nobody worked hard,’’ she said.

Jefferson, the superintendent, suggested that the film draws a “false argument’’ between preparing students to perform well on tests and giving them room to create. “We can do both,’’ he said.

Though he does not approve of the federal No Child Left Behind law, which sets achievement benchmarks tied to scores on standardized tests such as the MCAS, Jefferson acknowledged that his schools do emphasize test results.

In the lobby, James Porter, who graduated from Bromfield in 1984, recalled how he was dropped from the school’s math team after failing art and gym classes, where he didn’t “fit the ideal.’’

“That’s stayed with me my whole life,’’ he said.

The documentary screening, he said, was a step in the right direction. “I’m glad the school put this out there, so we can start this talk.’’