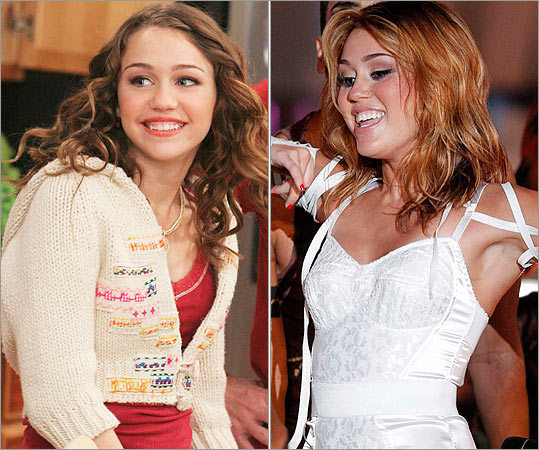 star Miley Cyrus’s transformation from sweet teen to sexpot has come as a shock to many parents, whose children may still idolize the “Hannah Montana’’ icon. Cyrus’s new album, “Can’t Be Tamed,’’ came out Monday, and her latest video casts her as a performer who has more in common with Lady Gaga or Britney Spears than the goofy character that made her famous.

The 17-year-old’s skimpy outfits and racy performances at last weekend’s MuchMusic Awards in Toronto left little to the imagination, and a photo of the star in which she may or may not have been wearing underwear caused an uproar on the Internet. Meanwhile, many parents are left wringing their hands, concerned their tweens will want to grow up overnight as well.

“Why is Miley’s behavior so shocking to parents and fans? As a childhood role model, she became a girl-next-door icon,’’ says Robyn Silverman, a child and teen development expert who blogs at drrobynsilverman.com. “It can be challenging for parents and fans to watch her new, ‘untamed’ persona stomp out the quirky, reliable, relatable Hannah Montana from the past.’’

If you or your child is having a hard time accepting an idol’s new persona, it’s important to do more than just talk about it — you have to hear your child’s perspective as well, Silverman says. Ask open-ended questions that spark discussion (“How does this new image compare with what you used to love about Hannah Montana?’’) rather than pass judgment (“Do you think she looks inappropriate?’’). Discuss the ideas of image and marketing, and ask them what they think Cyrus is trying to do.

“What garners attention is not the typical, it’s the outrageous, it’s the edgy,’’ Silverman explained. Celebrities aren’t trying to get positive attention, “it’s about any attention you can get. What sells?’’

If your teen is trying to dress and act like the new, more adult Miley Cyrus, “don’t panic,’’ Silverman said. “The more you push back and yell out your disgust, the more your daughter may cling to what you hate. She’s a teenager, after all!’’

Instead, take the opportunity to clarify your family’s values, and point out that we all have a choice in how we present ourselves. “So while you don’t want to ‘talk at’ your daughters, you also don’t want to leave them in the dark about what you think. After all, they are listening — even if they don’t want you to know they are.’’

Silverman, whose book about body image, “Good Girls Don’t Get Fat,’’ comes out in October, suggests that parents avoid putting all of their eggs in one basket by introducing their daughters to many different types of real-life role models. “The problem with isolating one role model is that they can change and grow in a direction that doesn’t [jibe] with your family’s values,’’ she says. “Role models change. If we make their icon indelible, we create a problem.’’

See how the "Hannah Montana" star has changed her image since debuting on Disney in 2006.
Your comment is subject to the rules of our Posting Policy
This comment may appear on your public profile. Public Profile FAQ