Returning to the nest 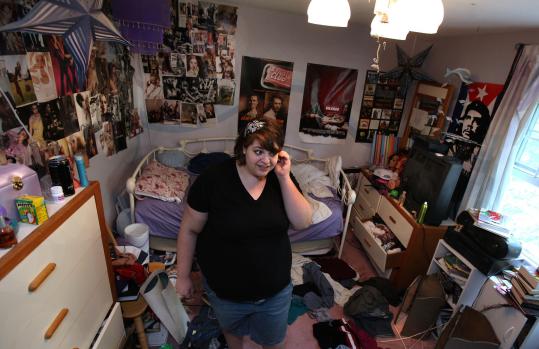 Jamie Harary did not find a job after graduating from UMass-Amherst, so she has returned home and moved back into the bedroom she’s known since childhood. (Pat Greenhouse/Globe Staff)
By Lucy Barber Globe Correspondent / June 8, 2010

Jamie Harary earned a degree in pyschology from the University of Massachusetts at Amherst this spring. But she hasn’t found a job, so instead of heading out into the world and getting her own apartment, she’s heading right back home to her parents’ home in Holliston.

Her father, Joe, says he expects they’ll be able to work things out. He also understands completely why she’s moving back home. “It’s a hard time to be heading out into the world,’’ he says.

A generation ago, college seniors were eager to earn their degree, land a job, and make it on their own. These days it’s more likely that they’ll be returning to the very bedroom where they spent their childhood.

The number of college graduates moving back home appears to have increased steadily over the past decade. Surveys conducted annually by Collegegrad.com, a job networking website, have found that the number of graduates moving back home with their parents has risen each year over the past decade, to the point where 80 percent of recent graduates responding to its online survey moved back home last summer. That compares to 77 percent in 2008, 73 percent in 2007, and 67 percent in 2006. The US Census Bureau does not keep statistics on college graduates returning home.

The reasons that college graduates are moving in with their parents are obvious — the economic slump, increased competition for jobs caused by high unemployment, and student loan debt that needs to be paid off. But also contributing to the trend is something not so obvious: the close relationships that many of today’s young adults have with their parents.

“Our relationship is the strongest it’s ever been,’’ says Darrien Garary, 21, who earned a degree in neuroscience from Boston University this spring and moved back with his parents on Long Island. “I communicate a lot more openly with them. I’ve grown up a lot in the last four years.’’ He hasn’t found a job yet.

Garary’s mother, Ivonne, says she happily welcomed her son home. “I’m very close with my kids,’’ she says. “I talk with them about personal things, things I would have never dared talked to my own parents about. I love that we have the type of relationship that they can tell me anything and ask my opinion.’’

To be sure, the economy looms large. Unemployment is still over 9 percent in Massachusetts, and the average college graduate has a student loan debt of $23,186. Many grads have no choice but to move back home.

“I don’t have to pay for anything,’’ says Amanda O’Connor, 22, who moved in with her aunt and uncle in New York after graduating from Emerson College with a degree in writing, literature, and publishing in December. “It was really hard to figure out what I wanted to do. I would be applying for all these jobs at publishing houses and not hearing back for another two months — and then hearing, ‘Oh, no, thank you,’ if you heard anything at all.’’ She now works as an unpaid intern.

None of this surprises people who have been studying the trend. Linda Gordon, co-author of “Mom, Can I Move Back in With You? A Survival Guide for Parents of Twentysomethings,’’ says it’s a credit to today’s parents that their children are willing to return to them. “There’s a lack of a generation gap,’’ she says. “We found ourselves more connected to our kids, which makes it even easier for them to move home.’’

Even graduates who can find work — and can afford to live on their own — may be more willing to move back home today. Carol Spector, Emerson College’s director of career services, says having a great job and moving back home are not mutually exclusive. “Not all students fall into one category or another,’’ Spector says. “Going back home is a safe place when there are so many changes all at once. This generation is more comfortable moving home because they know that they’re not the only ones doing it.’’

Bridge Connelly, 21, who just graduated from Clemson University with a degree in political science, has moved back home to her parents’ home in Medfield — where her 23-year-old sister, Maura, and 19-year-old brother, Matthew, also live. Connelly, who doesn’t have a job, is volunteering on Republican gubernatorial candidate Charlie Baker’s campaign and planning to attend Suffolk Law School in the fall.

She also has no qualms about returning from South Carolina to live with her parents. In fact, she says, now that she and her siblings are young adults, they feel more like roommates. “Everything’s good so far,’’ Connelly says. “I love coming home.’’

Lucy Barber can be reached at lbarber@globe.com.