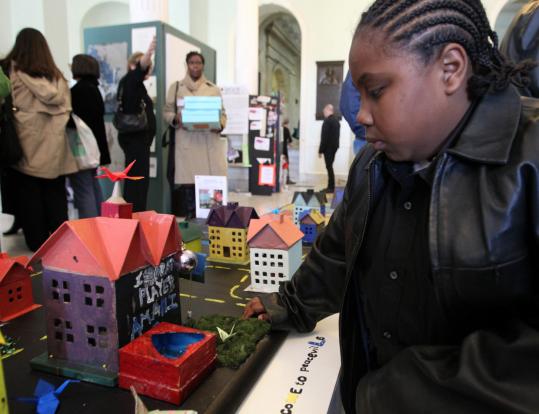 Amani Perkins is among the youngsters who created a fantasy home for Peaceville, which is on display at the State House. His older brother was killed four years ago in a shooting and he has turned to a young survivors program to help cope. (Matthew J. Lee/Globe Staff)
By Meghan E. Irons Globe Staff / April 30, 2010

A yellow road winds through this neighborhood, past colorful houses and blue streams graced by paper swans.

It’s the imaginary town created by young children who were close to homicide victims — the ones left to deal with living after a sibling, parent, or loved one was gunned down.

Their fictional papier-mâché community, on display through next Friday in Doric Hall at the State House, depicts a safe place, one vastly different from the violence-plagued worlds these children inhabit.

“This is my house,’’ explained 11-year-old Amani Perkins, showing off his creation, which had an orange roof, a red, heart-shaped Jacuzzi in front, and “#1 draft player’’ sprayed in graffiti on the exterior wall. “This is what I want in the future.’’

His house and the others in Peaceville came to be through a young survivors group that was created by Amani’s grieving mother, Audrey Brown-Perkins, who lost another son in a shooting four years ago and wanted an outlet for Amani.

Perkin’s older child, Antoine, 20, was fatally shot in July 2006 as he sat on his front porch in Mattapan while his parents rested inside. Brown-Perkins did not hear a sound.

Brown-Perkins, 45, sought refuge at Dorchester’s Louis D. Brown Peace Institute, a haven for families — including its founder — that are coping with a loved one’s killing.

Far from being a center of gloom, the institute encourages survivors to laugh, cry, talk, and live through their pain. But while Brown-Perkins and her husband participated in group sessions to voice their feelings, Amani kept his bottled inside.

He had mood swings, was acting out, and, though he had therapists, seemed unreachable.

“At one point, he said to me, ‘You don’t know how I feel. I lost my brother,’ ’’ Brown-Perkins recalled. “I’m looking at him and saying, ‘I lost my son.’ But the more I thought about it, I realized I really didn’t know how he felt.’’

Believing children needed a group of their own, Brown-Perkins created Express Yourself for 4- to 12-year-olds, many of whom internalize their pain and are unsure how to handle their sorrow.

Their first project was to craft a safe place out of a wooden box, then they made a quilt with pictures of lost loved ones.

Last fall, they began making Peaceville out of papier-mâché houses and a canvas foundation.

The project is temporarily part of the Violence Transformed exhibition at the State House. It ends next month.

Rekem Rose, whose older brother Victor was killed, fashioned a shoe box into a brick mansion with a chimney and paper crane on top.

“That’s so that peace will be around us — to keep the environment safe,’’ the 12-year-old Mattapan boy explained.

Rekem, who has long loved to draw and create, said art has helped him cope with death. But in joining the young survivor group, he has also learned that he is not alone.

“We are all friends here,’’ said Amani, pointing to the houses Rekem and another boy built. “But we are the bestest friends. We wanted the houses close so we could visit each other and get into the Jacuzzi and stuff.’’

Art is a refuge and an outlet for children coping with death, said Lisa Fliegel, an art therapist who has worked with traumatized children for more than two decades.

“The children often say, ‘I feel safe when I paint. I can think nice things about my brother. I can remember him,’ ’’ said Fliegel, who helped to coordinate the young survivors group.

For Brown-Perkins the road back from the death of her older son does not end.

Last year, police arrested a reputed gang member and charged him with Antoine’s killing. When Amani found out, he became enraged and wanted to hurt someone, his mother said.

“I said to him, ‘What did you learn from the institute,’ ’’ she recalled. “We went through the principles of peace. Then I gave him a hug and told him to go get his journal.’’