Long a poster boy for a deadly disease, BC student Gunnar Esiason hasn’t let it stop him 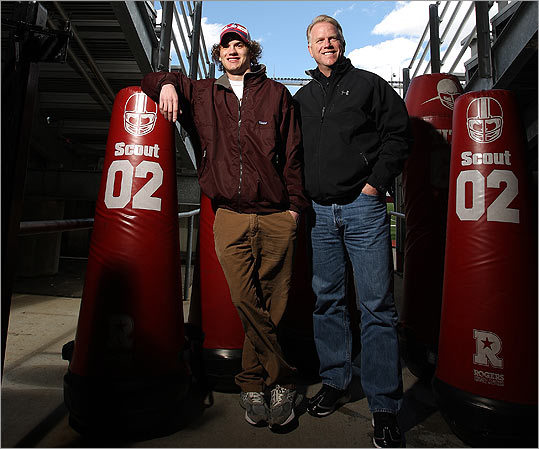 CHESTNUT HILL — Seventeen years ago, could Boomer Esiason have imagined that he’d be visiting his son Gunnar at college someday? It’s a fair question, one that Esiason, the former NFL quarterback-turned-broadcaster, doesn’t hesitate to tackle.

“Yup, I did imagine it,’’ he says, smiling in Gunnar’s direction. “And I hope I’m a small part of making that happen, not only for Gunnar but for all kids like him.’’

Now a Boston College freshman, Gunnar, 19, was diagnosed at age 2 with cystic fibrosis, an incurable genetic disorder. Primarily affecting the lungs, CF’s symptoms include persistent coughing, shortness of breath, and vulnerability to infection. Those afflicted with CF must undergo frequent treatments to keep their airways open and mucus-free. Not long ago, life expectancy for CF sufferers was less than 20 years.

Thanks in no small part to the Esiasons, that number has nearly doubled over the past decade. The Boomer Esiason Foundation recently passed the $80 million mark in funds raised for CF research and assists young CF sufferers like Gunnar to lead fuller lives through scholarships and other support services.

From the WEEI-AM (850) airwaves, where he appears as a weekly guest during football season, to his post, where he ranks among pro football’s most astute (and outspoken) analysts, Boomer has leveraged his celebrity in just about every way possible to promote awareness of CF. On a scale of 1 to 10, he registers about a 15 on the athlete-supports-worthy-cause meter. What motivates him? The answer sits four feet away in BC’s Alumni Stadium, where father and son agreed to a joint interview on a recent morning.

“My goal is for Gunnar to outlive me,’’ says Boomer, 49, who might be the proudest dad you’ll find among BC’s Class of 2013 parent pool. “That’s the way it should be. My dream is for him to be a dad himself one day, so he can find out all the anxiety that kids bring to their dads.’’

But sending Gunnar off to college? That, he admits, was “anxiety-ridden’’ for both parents. “You can imagine what a dorm room environment is to a CF parent. It’s like, oh my God. It’s crazy.’’

The Esiasons agreeing to an interview, their first on campus since Gunnar arrived at the Heights last fall, underscores their commitment to put a positive face on the disease and its effect on families.

In 1993, Boomer was playing for the when Gunnar was diagnosed with CF. Soon after, the two graced the cover of Sports Illustrated. It was a clear signal they’d be waging a very visible campaign against a deadly disease that afflicts some 30,000 Americans. And so they have.

Gunnar would graduate from Friends Academy on Long Island, where he played ice hockey and football, winning the 2008 12th Man Award from the New York State High School Football Association for overcoming “serious physical injury or disability’’ to contribute to his team’s success.

Boomer, who’d been a communications major at the University of Maryland, would slide smoothly into the broadcast booth once his NFL career ended in 1997. (His first internship, at a Baltimore TV station, brought him elbow to elbow with a young lifestyle reporter named Oprah Winfrey.)

As Gunnar grew older, the Esiasons began forging close ties with Boston and BC, primarily through Boomer’s WEEI connection. Being a world-class medical hub didn’t hurt, either. Gunnar got excited about BC while in 10th grade, he recalls, explaining that he wanted “a medium-size school with great academics and sports, and where if something did go wrong, I could get medical help.’’

According to Suzy Conway, BC’s assistant dean for students with disabilities, the school currently has “a few’’ students with CF, stressing that each is approached individually in accommodating their academic and personal needs.

“Every student is different,’’ Conway says, “even if they share the same disability others have.’’

Moving into a college dorm was still a huge step for a teenager coping with CF. Away or home, Gunnar adheres to a strict regimen of two hour-long treatment sessions daily. Every morning and night, he clears his lungs using a nebulizer and special vibrating vest that helps loosen excess chest mucus.

Also suffering from exocrine pancreatic insufficiency, a secondary condition often associated with CF, he swallows 45 pills per day, taking a dozen or so before each meal or snack. Without supplementary enzymes, Gunnar could not absorb food normally and would be vulnerable to malnutrition.

“The one positive to having CF is, you can eat whatever you want, especially fast food, and put zero weight on,’’ Gunnar half-jokes.

All joking aside, Gunnar says his roommate has gotten used to his treatment regimen — every piece of equipment must be carefully cleaned and sterilized — and that most other students, if they even know he has CF, don’t pay much attention to his disability.

“They talk to parents, but they don’t really want parents to be part of this,’’ he says. “They want us out of his life so he can start living on his own.’’ Pause. “Which has been really hard for us,’’ with a head shake and a laugh.

Hard, too, has been Boomer’s struggle to get his foundation back on its feet after 9/11. A decade ago, its offices moved into space provided by the investment firm Cantor Fitzgerald at One World Trade Center in Lower Manhattan. All foundation records were obliterated in the terrorist attack. On a personal level, Boomer lost not only his best friend, Tim O’Brien, a Cantor Fitzgerald trader, but hundreds of Cantor supporters as well. It took nearly two years to recover from the emotional shock, he admits. He remains extremely close to many 9/11 families, especially the O’Briens.

Gunnar has yet to pick a major at BC, expressing interest at this stage in English and political science. This summer, he’ll intern at the foundation’s new headquarters in New York’s Hell’s Kitchen neighborhood, where he’s supposed to come up with a plan to tie next year’s Boston Marathon to CF awareness. “We’re hoping to do something special for CF kids at BC while he’s here,’’ Boomer says. “Our family has good insurance. We can afford to pay for school. A lot of kids in Gunnar’s shoes can’t.’’ 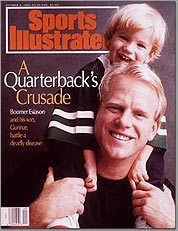