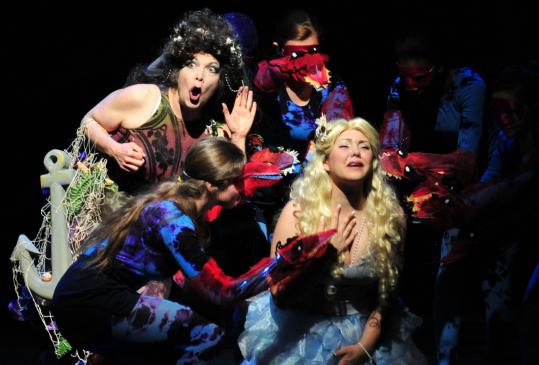 Sharks, jellyfish, eels, and other assorted schools of fish swim freely about in the Wheelock Family Theatre’s beautifully realized production of “The Little Mermaid.’’

Even with all these rich, evocative elements, don’t go expecting Disney’s musical version, with Sebastian the crab and a redheaded mermaid named Ariel. For this adaptation, playwright Linda Daugherty returns to Hans Christian Andersen’s original story, adds more plot twists, and places more emphasis on the struggle between good and evil and the sacrifices that must be made for good to prevail. Perhaps as a nod to or recognition of the vocal talents of award-winning actress Andrea Ross, who plays Pearl, the Little Mermaid, Wheelock cofounder Jane Staab wrote “Pearl’s Song,’’ which expresses the mermaid’s longing for the land at the top of the show and at the end. Ross has a beautiful voice, and although I confess I wished we could hear her sing “Part of Your World,’’ the simplicity and sincerity of her performance is charming. Ross also makes Pearl’s struggle to communicate — without the voice she gave up in exchange for legs — believable without resorting to mugging or bad pantomime.

Daugherty captures the mermaid’s love for the human Prince Stefan (David Kaim) and the price she must pay to pursue her love and walk on the land. Unfortunately, she also gets bogged down in scenes devoted to unnecessary exposition and a heavy-handed moral about ecology and the balance of life. Her script touches all the high points of the story, but with little insight into her characters and a penchant for cliches: “Can we ever understand anything we have not lived ourselves?’’ is one line we hear more than once, but it never feels connected to any real emotion.

Byrne (no relation to this reporter) keeps the action moving swiftly between the land and the sea and has wisely cast an ensemble of first-rate actors who rise above Daugherty’s tangled net of words. Margaret Ann Brady nearly steals the show as the Sea Witch, who sent the little boy in front of me cowering with her fearsome threats and the crowd of creepy eels surrounding her, and then had him howling with laughter as she sang the songs of the whales. Johnny Lee Davenport, best known for his performances in Shakespearean plays, is a noble Sea King and caring father, and Ricardo Engermann keeps the comic elements sharp with some terrific slapstick and pratfalls.

It’s hard to compete with the Disney version, but the Wheelock Family Theatre’s “The Little Mermaid’’ rises above the limitations of the script for a production that delivers a convincing undersea adventure.

THE LITTLE MERMAID Play by Linda Daugherty, based on the fairy tale by Hans Christian Andersen.