Diary of a Wimpy Kid

‘Wimpy Kid’ leaves out the anarchy 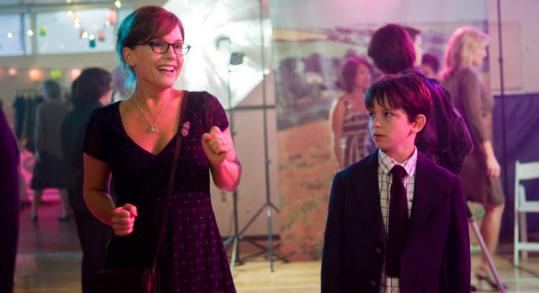 Zachary Gordon stars in “Diary of a Wimpy Kid’’ with Rachael Harris as his mother, here at a mother-son school dance. (Rob McEwan)
By Ty Burr Globe Staff / March 19, 2010

The tweener bestseller “Diary of a Wimpy Kid’’ is a gimmick book but an inspired one: A fake diary — blue lines, blocky handwriting and all — written from the point of view of a sixth-grader desperate to fit in. Greg Heffley’s an everykid who makes bad choices and to whom bad things keep happening, and that’s just another day in cinderblock hell. What makes the book special are the line drawings, ostensibly by Greg but really by author Jeff Kinney: deft, funny cartoons of thuggish big brothers, blockhead best friends, and bug-eyed class freaks. “Diary of a Wimpy Kid’’ the book is “Malcolm in the Middle’’ boiled down to a brilliant doodle.

“Diary of a Wimpy Kid’’ the movie returns Kinney’s tale to live-action reality, and the party’s over. It starts brightly enough: Greg (Zachary Gordon) heads out for the first day of school contending with a punk-wannabe brother (Devon Bostick), spudlike baby brother (Connor and Owen Fielding), doofus dad (Steve Zahn with wild eyes and a roll-on tan), and brisk mother (Rachael Harris, the termagant of “The Hangover’’). All he wants is to stand out in the Darwinian scrum that is middle school, and all that’s holding him back is his longtime best friend, Rowley (Robert Capron), a blissfully naive fatty. Rowley rides a girl’s bike.

Directed by Thor Freudenthal (“Hotel for Dogs’’), “Diary’’ includes a few wry, Jean Shepherdesque observations of schoolyard mythology, like the stinky cheese slice that has lain on the outdoor basketball court for months, socially contaminating anyone foolish enough to touch it. Other aspects ring false: What actual middle school hosts a mother-son dance? That’s just asking for trouble.

The movie’s bigger problem is that its live-action Greg Heffley is a jerk. In his quest for instant fame, our hero treats his friend like dirt, trash-talks the school’s perfectly reasonable alt-girl (Chloë Moretz), ditches a group of kindergartners in a construction pit in the rain (and blames it on Rowley), and otherwise behaves like a little Hun.

I get it, I get it — redemption and life lessons await. But they’re awfully slow in coming and half-hearted when they appear, and by then we’ve lost patience. Not many young actors can get to us like an adolescent wiseass over the long haul; Matthew Broderick got away with it in “Ferris Bueller’s Day Off,’’ but just barely. Gordon is not Broderick.

The upshot is that everyone at school prefers the guileless, optimistic Rowley, and a half hour in, so do we. Remember that friend your parents said was a “bad influence’’ and tried to keep you away from until you realized they were right? “Diary of a Wimpy Kid’’ is about him. Maybe there’s an interesting drama there, but as a family comedy, it’s a tough sell.

Every now and then, the movie reverts to the anarchic line drawings of the book and you breathe a sigh of relief. They’re funny and they capture the way being 12 can look like an over-exaggerated black-and-white farce. “Diary’’ probably should have been handed over to a maverick animator like Marjane Satrapi of “Persepolis’’ or — here’s a novel idea — Kinney himself.

Of the live actors, only Grayson Russell as uber-nerd Fregley comes close to being that sort of human cartoon (he practically has an exclamation point visible over his head). The others are stuck in tween-movie limboland, neither character nor caricature. “Diary of a Wimpy Kid’’ is a movie that needs to go back to the drawing board — literally.

DIARY OF A WIMPY KID

Jeff Filgo, and Jeff Judah, based on the novel by Jeff Kinney