Family feuding? Some say it’s time to call in the coach. 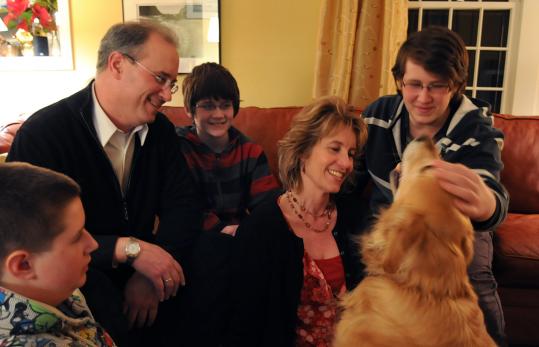 It wasn’t a crisis, or a conflict, or even a quandary that spurred Ilene Sharpe to seek help for her and her child last spring. “It was more of a dull ache,’’ says Sharpe, a middle-school health teacher from Natick. Without an acute issue or troubled history to address, Sharpe felt that she and her 26-year-old daughter didn’t need to see a psychotherapist. Instead they made an appointment with a professional coach.

“I look at it like going to the dentist,’’ Sharpe says. “It’s almost like a checkup for your relationship.’’

For two decades, life coaches have been helping individuals to identify goals and maximize potential, but more and more families are turning to coaches for help navigating the thorny terrain of parent-child relationships and group dynamics to achieve a greater sense of well-being as a unit.

“I’m a firm believer in therapy,’’ says Sharpe, “but coaching is very different. Instead of talking and thinking and trying to understand the past, you start from where you are and move forward. It’s very active and hands-on, and for us it created a deeper trust.’’

The main issue driving families to coaches, not surprisingly, is communication — or the lack of it. Mom and Dad don’t see eye-to-eye on parenting style. The kids feel marginalized or misunderstood. The family’s talk is toxic — filled with sarcasm and blame, stuck in old patterns and entrenched roles. Or there is no talking.

“Helping people communicate clearly and skillfully, rather than in hurtful ways, is so valuable,’’ says Jim Wolfson, who is among the growing ranks of life coaches expanding their practices to work with families. He speaks of families as singular entities whose collective identity can be stengthened through coaching. “In corporations and organizations there’s the notion of a soul of a company, a group energy that doesn’t belong to any one particular person, and I teach families how to access that.’’

Coaches are trained to work both in person and over the phone; some are testing the waters of webcam meetings, Skype sessions. Family coaching usually involves homework assignments and is often spatially oriented and activity-based: creating relationship maps, for instance, to identify where the family is and where each member wants to go, and building so-called fantasy lands to find common ground.

Nancy Feth became a family coach after hiring Wolfson to work with her own brood. She recalls growing up in a large family whose members had an easy time speaking their minds but rarely did it well, and says that she, her husband, and their three sons weren’t communicating at all. Now her 11-year-old is using classic coaching vocabulary to call them out.

“He’ll go, ‘Dad left the room. He’s stonewalling!’ ’’ Feth says with a laugh. “If we can give parents and children more tools, if we can plant those seeds with families, the authentic conversations would happen. We’re trying to build capacity and resilience for managing stressful situations. If they can do it when they’re not in the heat of the moment, they’ll be able to click in when they are in the thick of it.’’

Because the field isn’t regulated, there are no hard statistics on the growth of family coaching, but by all accounts it’s on the rise. Professional training institutes now offer certification programs specifically in family coaching, and in 2009 the Robert Wood Johnson Foundation gave a $2 million grant to found the Family Commons, a family coaching center in Santa Monica, Calif., launched by staff at UCLA’s Global Center for Children and Families. On Monday, HGTV launches a new series called “Home Rules,’’ hosted by life coach Fran Harris. Giovanna D’Alessio, president of the International Coach Federation, says that family coaching a natural extension of the discipline.

“Coaching is a proven tool for a person in transition or experiencing change,’’ D’Alessio says, “and it’s not a surprise that they would want to include family members, to understand and strengthen the dynamics.’’

Family coaching runs the gamut from aspirational — a parent and an adult child hoping to create a closer connection, for example — to purely practical. Michael and Lee McKenzie, a physician and a nurse/psychologist, have expanded their Natick medical practice to include Family Rhythms, a coaching service that focuses the day-to-day struggles families face. The couple observes that we live in a time where parents aren’t supposed to make a misstep, and they say they counsel many families in stress or even crisis over issues that the previous generation would likely have brushed off.

“We met with a family with a 3-year-old who were embroiled in morning battles five days a week,’’ says Michael McKenzie. “The parents were very Type A. They’d wake up and jump out of bed at full run, and the kid wanted to open her eyes and look at the ceiling and daydream for a while. It was a matter of pointing out something as simple as, ‘You guys are morning people, and she’s not, and who cares if she goes to day care in her pajamas.’ Our intervention was literally helping them tweak their morning routine.’’

The McKenzies point out that while doctors go to medical school and police officers train at the academy, there is no formal training for being a parent — a job most would agree is as challenging as any.

Add to that a recession, and “people are living in anxiety much more than with joy for being in the world and being parents,’’ Lee McKenzie says. “Demand is way up.’’