Instead of turning away, he runs to help 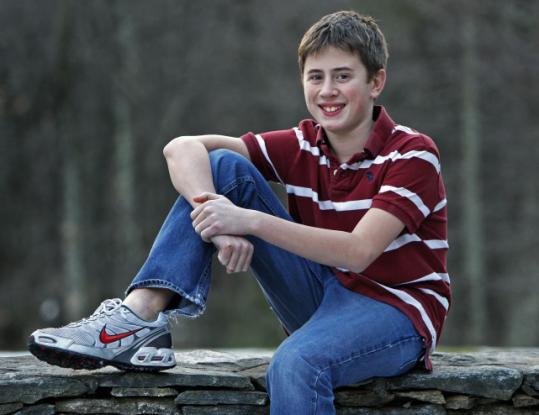 If a quiet car ride to school sounds like bliss, take note: Sometimes, your child’s wandering eyes and backseat natterings can teach you a valuable lesson. Such was the case with young Zach Levine.

A little over three years ago, the then-fourth grade student became fixated with the New England Center for Children, a private school for autistic children that he passed each day on his way to school in Southborough. Who were these children, he asked, and why didn’t they go to his public school in the same town? What did autism mean, and what could he do to help them?

Ian Levine did his best to answer his son’s questions, but at a certain point he’d exhausted his parental wisdom.

“So I got a little more information on the school, and I found out they were holding a 5K fund-raising race,’’ said Ian. “Zach asked if he could run.’’

Zach Levine ran that race and then some. For the next two years he spearheaded a fund-raising team, Kids Helping Kids, that attracted dozens of runners, including classmates, family friends, local business owners, and his younger brother, William.

His efforts raised almost $11,000 for the school’s Michael S. Dukakis Aquatics Center, which provides therapeutic exercise for its students. They also earned Zach a place of honor at the New England Center’s gala in December, when he received one of three annual awards for exemplary fund-raising.

Along the way, Zach found out every thing he could about autism.

“We have other teams that have raised that kind of money, but generally they are corporate teams or friends and families of children with autism,’’ said Joseph Ziska, the center’s director of donor relations. “It is truly unique for a 10-year-old to have taken such an interest in our work. It really touched us.’’

That feeling goes both ways.

“I used to wonder why kids with autism didn’t play sports, but then I learned that some things in their brains don’t function like mine. They need help, but they are just like me. They don’t think anything different from me,’’ said Zach, now 13. “I like to help people who may need some help. To help someone else is the best feeling in the world.’’

His father and mother, Keri Levine, take a deep breath when they hear Zach speak. These are not idle musings, they say, and they are nothing new. The couple doesn’t want their son to become self-conscious, but neither, too, do they want him to change.

“We’re not sure where it all came from, but he’s been like this since he was a baby. He’s always cared about other people,’’ Ian said. “We’ve kind of stood back and let him show us the way.’’

When he was in first grade, Zach’s attention was drawn to a boy who had a learning disability and used a wheelchair. His classmates froze. Zach melted.

“No one really talked to him, and I thought it would be nice to talk to someone who didn’t have someone to talk to,’’ Zach said, matter-of-factly.

“It was a little awkward but I would just say stuff that was on my mind - about sports teams, the Patriots, the Red Sox, the Eagles - and sometimes he would make a noise or smile, which meant he enjoyed what I was saying.’’

A few years later, he met another classmate whose learning disabilities segregated her from the mainstream.

Last year, Zach made a point of eating lunch with her a few times in the school cafeteria. This year, he visits with her during one of his free periods every Friday.

“It’s just one study period a week, and I figure if I can help someone who doesn’t have the same abilities as me, it’s worth it,’’ he said. “If the other kids ask me why, I just say it’s because I’m friendly, and I think it’s nice to help others out.’’

As he said this, Zach started to get antsy. He wasn’t ready to field heady questions about his character, and he wasn’t not sure whether he was running late for basketball practice. Like any teenager, he has interests that run the gamut, from a fantasy football league he’s organized to the homework he’s yet to finish. His mother fielded the next question: Will Kids Helping Kids be running again on May 8, when the center holds its fourth annual 5K?

“When they called to see if he’d be running again, we wanted to make sure he really wanted to do it,’’ she said. “We baited him over dinner. We didn’t want him to do it for us or anyone else. He said he wanted to, so that’s the plan.’’

At this, Zach perked up.