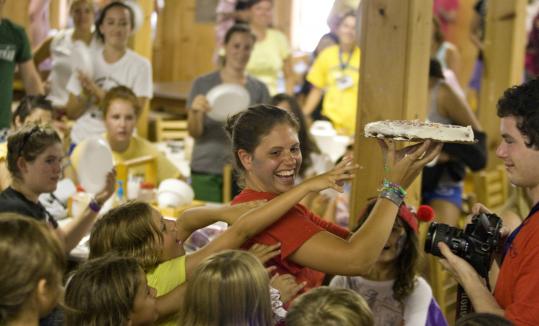 Sonya Soloway, a counselor at Americaâ€™s Camp in the Berkshires, holds a birthday cake as her young charges make a grab for it. (Dina Rudick/Globe Staff)
By Bella English Globe Staff / August 22, 2009

PERU, Mass. - Julia Coombs clears the lunch tables of stray cups and napkins, then rushes over to join her friends in a line dance. The dining room is a blur of sweaty bodies and a cacophony of voices dancing and singing to “The Music Man.’’ Julia is 15, a confident, chatty counselor-in-training at America’s Camp.

Six years ago, she was a shy 9-year-old who had never been away from home. And she didn’t want to talk about her father, Jeff, who was killed on 9/11 when American Airlines Flight 11 crashed into the North Tower of the World Trade Center. Today she’s fine with the topic, and even helps younger kids talk, if they need to, about the parent they lost that same day. “There’s like nobody else who knows what you’ve been through, but here, everybody’s on the same page,’’ says Coombs, who’s from Abington.

That page, or day, is Sept. 11, 2001, and the kids at this camp in the Berkshires lost a parent in the terrorist attacks. America’s Camp opened in 2002 and hosted 78 kids shellshocked from their loss. This year it plateaued at 260, the same as last year. That’s because many of the original campers are in their 20s now. Taking their place are the youngest campers, 7 and 8 years old, who were infants - or even in utero - when their parent died.

“Our youngest were still in the womb,’’ says Jed Dorfman, who, along with Jay Toporoff and Danny Metzger, created America’s Camp, sponsored by the Twin Towers Fund and the America’s Camp Foundation. “Some have real memories of their mother or father, and others only know them through stories and pictures. We have 21-year-old counselors who were 13 when they started coming to camp. It’s nice because they can relate differently to the kids. We can all sympathize, but they can empathize. The older ones go out of their way to make sure the younger ones feel comfortable and safe.’’

At the outset, the founders - all veteran camp owners - committed the camp to 10 years, which would give current campers two more summers of a free week. “We’ll reevaulate and see what the needs are,’’ Dorfman says. Most of the staff is volunteer, the counselors recruited from the country’s best camps. America’s Camp is now held on the grounds of Camp Danbee, which Toporoff owns.

The idea, back in those chaotic early days, was to give the “9/11 kids’’ a place where they could hide out and hang out, an escape from the grief and curiosity that shadowed them. There are also a handful of children of police officers and firefighters who died in the line of duty.

There may not be as many photos of deceased parents on cabin walls or “NYPD’’ T-shirts in the crowd as in past years. But sadness can still bubble up. Volunteer therapists from the Center for Grieving Children in Portland, Maine, are on hand at Buddy Central, a drop-in center where campers can go for some down time or vent by punching a bag or beating a drum.

Over the years, Dorfman has heard the kids talk among themselves: Where were you on 9/11? How did you hear about it? Now, America’s Camp is turning into a “regular camp,’’ with normal homesickness replacing raw grief. These days kids may be upset about their father or mother remarrying, or they may talk proudly about the streets that are named for their lost parent.

Their emotional evolution can be traced through the camp art work. Each year there is a group project memorializing 9/11. The Norman Rockwell Museum in Stockbridge has exhibited the works, and they will be on permanent display at the 9/11 Museum when it opens at ground zero.

Those early projects were angry and visceral, with images of burning towers, ambulances and missiles, and notes such as “Bye Dad’’ and, simply, “WAR.’’ But as the summers passed, the images and words lightened. Rainbows, hearts, angels, flowers, and butterflies began to appear, along with the word “Dad’’ and “Hero.’’ The children were recovering.

Last year, their art project became a public service project. They wrote inspirational inscriptions on clay hearts and sent them to American troops stationed overseas and to terminally ill children in New York City. This summer, they’re making Blankets of Hope to send to veterans at Walter Reed Army Medical Center in Maryland.

But most of the time, they’re enjoying dozens of activities spread over 260 acres of campground. The waterfront boasts sailboats, kayaks, canoes, water-skiing, a banana boat, and a 100-foot water slide into Lake Ashmere. There are field trips and ice-cream eating contests and “MTV Night,’’ when each cabin puts on a musical dance show for the others.

On Wednesday, Anna Sweeney, 13, and her brother Jack, 12, sat on the grass with friends. Their mother, Amy, was a flight attendant on American Airlines Flight 11, whose passengers were hailed as heroes for relaying critical information about the hijackers to the ground crew. Both kids say they have made close friends at camp and love the counselors.

“I was 5 when my mom died,’’ says Anna, whose family lives in Acton. “It’s easy to talk about here because everyone has gone through the same thing.’’

Robert Mathai of Arlington is in his seventh summer at America’s Camp. His father, Joseph, perished in the World Trade Center, where he was attending a meeting. Now 16, Robert is a counselor-in-training, and takes seriously his duties to the younger kids. The other day, he powdered his hair, donned old man clothes, and entertained the dining hall by winning the “Senior Olympics,’’ crawling over the finish line and collapsing.

“If the younger kids are sad, I can help cheer them up,’’ he says. At “normal’’ camps, he adds, kids talk about both their parents. “But here you don’t have that. You can just be a normal kid with one parent.’’

One of those youngest kids is Leah Quigley, born a month after her father, Patrick, was killed on United Flight 175. This is her second year at camp; her sister Rachel, 13, has been to four summer sessions. They both say they love the camp, counselors, and camaraderie. Their mother, Patti, is grateful.

“The mention of America’s Camp always puts a smile on my girls’ faces,’’ says Quigley, who lives in Wellesley. The camp has provided both comfort and confidence. “They always come back better than when they left. The fact that they are ‘9/11 kids’ is now just a side note, but it is a note that has shaped their lives in ways they may not see yet.’’

This is David McGinty’s seventh summer at camp. He especially loves the woodworking, and over the years has made “everything they have and even stuff they don’t have.’’ This year he’s making his mother a jewelry box. His father, Mike, was killed while on business at the World Trade Center, and David, 15, says he feels perfectly comfortable talking about him at camp. His 16-year-old brother, Daniel, is in his eighth year at camp.

“They both look forward to it every year and I have to say, so do I,’’ says their mother, Cindy, who recently moved the family from Foxborough to Connecticut. “It is the one week both are gone at the same time. I never worry about them, and I find it so relaxing.’’

Most of the campers are from Massachusetts, New York, and New Jersey. Year after year, they’re put in the same bunk, and from both joy and tragedy, deep friendships have formed. The older ones text, call, and get together during the school year. Some are now counselors together.

Emma Rathkey was 13 years old that first summer of camp. Her father had died on the 83d floor of the North Tower, and she wanted no part of camp. “I thought it would be just one big therapy session, and I was not ready to talk about 9/11 and my dad,’’ says Emma, who lives in Mountain Lakes, N.J.

It didn’t take long for her to fall in love with the place. Now 21, Emma and her camper friends are counselors today, determined to make camp comfortable for the younger kids. This summer, Emma’s girls are going into their freshman year in high school, the same age she was that first summer. “My girls talk about their dad or mom, and that’s good,’’ she says. “It’s the only place you’re not judged. This place is family.’’