... for other people. The economy may actually be helping errand-running businesses. 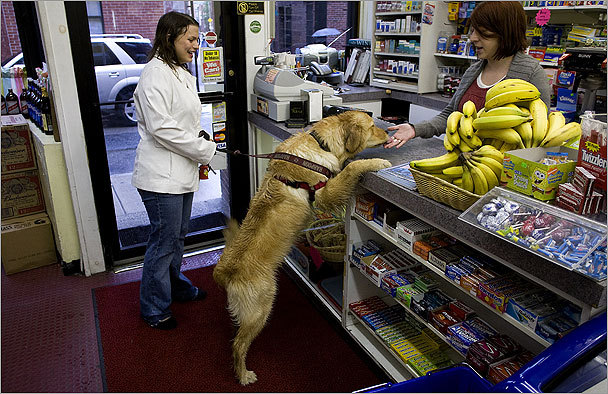 Gia Veglia leaves a North End home on most mornings and walks a Yorkie named Ella, but the dog and house aren’t hers. Veglia’s fiance, Omar Doherty, wakes up a lawyer at 5:30 every morning and cooks him breakfast. Their friend Jason Cahoon often spends his time fixing broken computers.

The jobs are among a long list of services the trio offers through their errand-running company, Whaddya Need. They deliver food, clean houses, and do virtually anything else a client in the North End asks for. They’ve moved 6-foot garden gnomes, edited a thesis, and waited in line for Red Sox tickets.

The three friends started Whaddya Need last July. It’s a side job for the three, who all have full-time jobs: Cahoon, 25, is a software engineer downtown; Doherty, 27, is a lab technician at Quest Diagnostics; and Veglia, 27, works overnights at a rehabilitation program for troubled girls in Concord.

“The Whaddya Need job is a nice change of pace from my other job,’’ Doherty said. “I get to meet people from all over the neighborhood, use my brain in a different way.’’

In this era of instant gratification - getting what you want when you want it - the market for errand running is widening, and businesses are cropping up to fill the need. There are virtually no start-up costs and experience is rarely necessary. Though errand runners often endure late hours, demanding clients, and endless trips around the city, they also enjoy the freedom of a work-when-you-feel-like-it job with tasks that often border on leisurely, such as dog walking or grocery shopping. For years, Entrepreneur magazine has cited errand running as one of the best start-ups for people with an itch to run a company.

The benefit for clients is obvious. Instead of leaving the office early to pick up dry cleaning or run to the post office, they can work that extra hour and pay someone else to run their errands. Hiring someone who is virtually a personal assistant might be considered an unaffordable perk these days, but for some people it is an investment in job security: They can stay at their desks instead of leaving to run an errand.

Businesses run out of a home or by only one person have been on a steady increase in the past decade, according to the US Small Business Administration. John McDowell, spokesman for the administration’s Office of Advocacy, said the number of one-person operations typically increases during recessions.

Fiona Wilson, an assistant professor at the Simmons School of Management, said the rise in errand-running companies is part of an “economic disconnect,’’ in which the need for errand-running came about before the recession, when people’s lives became too hectic, and the desire for entrepreneurship came after it.

Wilson said she’s seen many of these types of businesses popping up lately, and that errand-running can be enticing with its low overhead and easy labor. “It’s not too hard to say you offer these services and . . . put a website up, and suddenly that’s what you do,’’ she said. “You can basically put yourself in this business tomorrow if you wanted to.’’

Whaddya Need sits on the first floor of a former stable on Salem Street that Veglia’s great-grandfather refurbished. She’s lived in it her whole life, and she and Doherty, a former Marine, now live behind the bright, painted storefront.

The errands they perform run the gamut. Many involve helping the elderly, such as picking up medications and shoveling steps, and some are fairly eccentric: For one client, they set up a new bed for a child’s Christmas gift while his parents distracted him in another room. They once saved a spot in a registration line for a student who was selecting college classes. They say they’ve gotten so many jobs lately that they’ve had to subcontract out some of them, like baby-sitting and moving, to neighbors.

Al Stankus, 61, employs Whaddya Need to clean his North End home. Although he’s unemployed, he says it’s worth $66.50 to walk into a spotless apartment. “How do you justify anything?’’ he said. “You want things done and you have a few extra bucks, you do it. It’s certainly not a moral quandary.’’

Melissa Frank, 45, began her business, Renta-Yenta , two years ago to run errands and plan events. She said customers are often surprised when she shows up: small and middle-aged, looking nothing like her logo of a Jewish grandmother, a symbol she hopes evokes thoughts of being taken care of.

“My days are never boring and they’re never the same,’’ said Frank, a former synagogue event planner from Wellesley.

Charging roughly $30 an hour and also taking barters, Frank said she makes nearly as much as she did in her previous jobs, save benefits like health insurance. She said she believes the down economy is actually helping her business: People are so worried about keeping their jobs that they spend more time working and have less time to run their own errands.

Ed Phillips, one of Frank’s regular customers, said she helps with everything from selling stuff on and mailing bills to helping plan his daughter’s bat mitzvah.

“If I can delegate to her, then I have more time to spend with my kids, to relax and enjoy my life,’’ Phillips said.

Leah Busque, 29, of Charlestown, quit her job at last summer to start RunMyErrand.com, a site on which “senders’’ post errands that “runners’’ carry out for them.

Anyone can sign up, but Busque screens the runners, who get paid in virtual credits that senders purchase and allot with the task. Errands, which range from bringing someone lunch to handing out fliers, all get completed eventually, but if too few credits are allotted, it could be hours before senders see their cannoli from Mike’s.

The site has roughly 100 runners, and they aren’t just college kids looking for a buck. They span the spectrum from stay-at-home mothers to professionals supplementing their income, Busque said. Some stores are joining in, such as Cold Stone Creamery in Charlestown, which uses the site for cake deliveries.

Mary Casparis, a sender and busy mother with two young sons, has paid $7 for runners to drop off mail. She admits that the post office is only three blocks from her work place in Cambridge and that she could theoretically run any of the errands herself.

“That hour is more valuable to me than the money I’m spending on it,’’ she said. “We’re all better off.’’