A scientist, doctor, and mother join forces to speed a cure for a fatal childhood disease 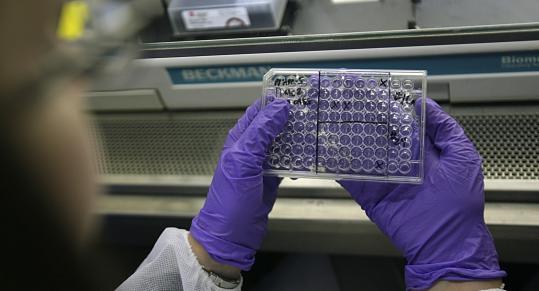 PROVIDENCE - In a lab overlooking the Seekonk River, a muscle twitches. It's only about four millimeters long, and its cells have never grown inside a human body. It's barely strong enough to bend a pair of plastic pins.

But in that tiny muscle, and in thousands of others like it grown in laboratories, researchers see a possible way to speed a cure for Duchenne muscular dystrophy, or DMD, a fatal disease that eats away at muscle tissue.

The hope is that lab-grown muscles will allow scientists to test treatments much more quickly and accurately than ever before.

If it works, it will be thanks in part to an alliance of three people: a Brown University research scientist, a tenacious medical doctor, and a mother who wouldn't give up on her child.

"This could change the whole landscape of the disorder," said Christine McSherry of Pembroke, whose son, Jett, 13, has the disease.

When Jett was diagnosed at 5 years old, doctors told McSherry he'd probably die by 15. The genetic disease, which affects mostly boys, is progressive. There is no cure.

When she asked what could be done, "They said, 'Absolutely nothing,' " she recalled.

The answer infuriated her. "As soon as someone says 'There's nothing you can do, there's no hope,' my intuition is to say, 'That's not true,' " she said.

At first, like many other parents, she concentrated on possible cures, like stem cell research and gene therapy. "But then I realized, what is that going to do for us if we can't take care of these kids today?" she said.

She formed a nonprofit, the Jett Foundation, to help fund DMD research and began to seek out doctors who were aggressively treating the disease's symptoms. At a conference in 2006, she met Dr. Brian Tseng. A molecular biologist as well as a doctor, Tseng specialized in DMD, and his attitude toward treatment was in step with McSherry's. The two struck up a long-distance correspondence.

When Tseng was approached last year to join Harvard Medical School's faculty and start a DMD clinic and lab at MassGeneral Hospital for Children, McSherry used her foundation to help fund the clinic.

At the clinic, Tseng equips patients with the wheelchairs, ventilators, and other devices that help them cope. But the parents he sees are always looking for alternative treatments. "They'll try anything anyone tells them, they're so desperate," Tseng said.

DMD is a difficult disease to study, because of the lack of good clinical models. Mice that are genetically engineered to have DMD are easy to study, but don't become weak the same way people with DMD do. "You're trying to figure out how to rescue a mouse that's not crippled to begin with," Tseng said.

There are also genetically engineered dogs with the disease, and unlike mice, they have all the outward symptoms. Yet experimenting with them is prohibitively costly.

But now, there may be another way - and it's taking shape in Brown professor Herman Vandenburgh's lab.

Along with nurturing the growth of tiny muscles for testing, the lab is developing a machine that will eventually function like a high-precision robot eyedropper and camera. It will pick up minute amounts of drugs or other substances and inject them into bumblebee-size plastic cups, arranged in a grid with 96 cups to a tray, and document the effect immediately.

Inside each cup will be one of the tiny human muscles, cultured in Vandenburgh's lab from people who have a form of muscular dystrophy.

Each mini-muscle is stretched like a hammock between two plastic posts. Zap the muscle with electricity and it twitches.

The amount of force it exerts can be measured extremely accurately, so it's easy to tell exactly how strong the muscle is - and the effect of various treatments.

Because Vandenburgh's device will be able to test thousands of mini-muscles at a time, it will be easy to do a large-scale study of how a particular substance affects them. And, said Vandenburgh, the results are more accurate than traditional laboratory tests.

Vandenburgh - who started working on growing muscle tissue in the 1990s, as part of an experiment run by NASA - is the first to grow functional muscles that work the same way as muscles in the human body, said James Tidball, a researcher at UCLA.

Vandenburgh and Tseng met in 1991 and kept in touch. Last year, when Tseng arrived in Boston, he drove to Providence to hear Vandenburgh talk about his work with his company, Myomics Inc., which he formed in 2003.

"My jaw hit the floor. I was speechless," said Tseng. "I saw the advent of a paradigm shift on how we really treat boys with DMD." He and Vandenburgh went out for a few beers and planned their collaboration.

The work has impressed others.

"Being able to use human muscles is a huge step forward," said Rachelle Crosbie, a DMD researcher at UCLA. "It's very difficult to grow fully differentiated skeletal muscle fibers," Crosbie said. "Heck, I'd totally like to use that."

Said UCLA's Tidball, "I think it could be extremely useful not just for Duchenne but any muscle disease."

Myomics Inc. is already testing substances on a limited scale to see whether they harm or strengthen the mini-muscles. Promising substances will move ahead to a human trial; Tseng hopes to begin by the end of the year.

Meanwhile, McSherry's nonprofit is raising money - via golf tournaments and barbecues - to cover the $150,000 for the screening process and $600,000 for human trials. The West Coast-based Quest Foundation has pledged $30,000 in matching funds.

The process may seem expensive, but for drug research it's incredibly cheap, she said. And the payoff could be priceless. She hopes that by keeping children with DMD healthier for longer, they will be able to benefit more from eventual gene-therapy or stem-cell treatments.

Vandenburgh's work has changed the way she looks at her son. Now, she's planning for his college education and career. "I see so much more of his future," she said.

S.I. Rosenbaum can be reached at sirosenbaum@globe.com.