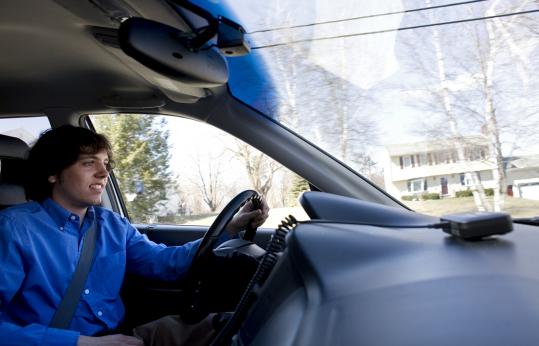 Jonathan Fischer began work on Speed Demon when he was 16, after a Lunenburg teen was killed in a car crash. (Yoon S. Byun/Globe Staff)
By Hiawatha Bray Globe Staff / April 2, 2009
Text size – +

LUNENBURG - My cellphone buzzed all the way to Lunenburg. Serves me right for speeding.

The phone was awash in text messages fired off by a black box that was riding in the car with me. The box, called Speed Demon, knew exactly where I was, and how fast I was driving. It transmitted an annoying alert every time I nudged the Ford Escort a few miles over the speed limit.

I did a lot of nudging, too. Lunenburg's a long haul from Boston, and I wanted to meet the inventor of Speed Demon before he was old enough to buy beer.

Jonathan Fischer is just 20, but he's been working on this gadget since he was 16. Inspired by the tragic death of a Lunenburg teenager in a high-speed auto wreck, he wanted to create a machine that would alert parents whenever a child became too careless behind the wheel.

Speed Demon combines a GPS navigation unit with a cellular data modem and some very smart software. The prototype earned Fischer an honorable mention at the Massachusetts State Science Fair in 2005. His proposal for turning Speed Demon into a moneymaker took first prize in a couple of business plan competitions, earning him $20,000. That helped Fischer polish up the software and form an alliance with a manufacturer in Finland that builds the box. Now, Fischer is a sophomore business student at Champlain College in Burlington, Vt. He's also a budding entrepreneur, with dozens of Speed Demon units stacked up in the basement of his parents' Lunenburg home, waiting for orders to roll in.

The Speed Demon is available at Fischer's aptly named website, www.livefastdriveslow.com. At $250, plus a monthly $15 service fee, it isn't exactly cheap. But the device does deliver exactly what it promises - a simple, powerful, yet nonintrusive way to discourage young drivers from speeding.

After you buy a Speed Demon, you register it at the company's website, and start programming speed limits for the car. Perhaps Speed Demon's coolest feature is its ability to distinguish between high-speed highways and slower surface roads. It can be set to send a warning when the car exceeds 70 miles per hour on Interstate 93 or 40 miles per hour on Massachusetts Avenue. That's made possible by some fancy programming that compares the device's GPS coordinates with detailed maps of every street in the country. Fischer came up with the software, and he's filed a patent on it.

Speed Demon transmits location data as well as speed, so you know where your kids are misbehaving. You can receive the information through e-mail or cellphone text messages. If the driver is a repeat offender, you'll get sick of hearing the ringtone - a good excuse to crack down on Junior's bad driving habits. You could also set the system to ping your child's phone, something Fischer discourages because the distraction could cause an accident.

Don't want your children driving at certain hours of the day? There's a curfew setting. If the car moves between, say, midnight and 6 a.m., you'll hear about it. Of course, clever kids may simply switch off the Speed Demon. But you'll get another warning message if they do.

One more slick feature is a panic button, just the thing for emergencies. Press it and Speed Demon calls home for help.

Impressive as Speed Demon is, also admire it for what it isn't. Some GPS teen-trackers watch a car's every move. They continually monitor where a driver is going, and can be set to warn parents when they drive to the "wrong part of town" or to the home of an unsavory friend.

There may be a place for this kind of highly intrusive tracking, but Fischer wanted no part of it. "As a teenager, I feel that teens deserve their privacy," he said. "My device only alerts when you're driving dangerously. Drive safe, and you get to keep your privacy."

So Speed Demon offers teens a shrewd little payoff. Don't want Mom and Dad to know where you're going? Then drive there slowly. Otherwise, your parents' cellphones - and maybe yours - will shriek as insistently as mine did.