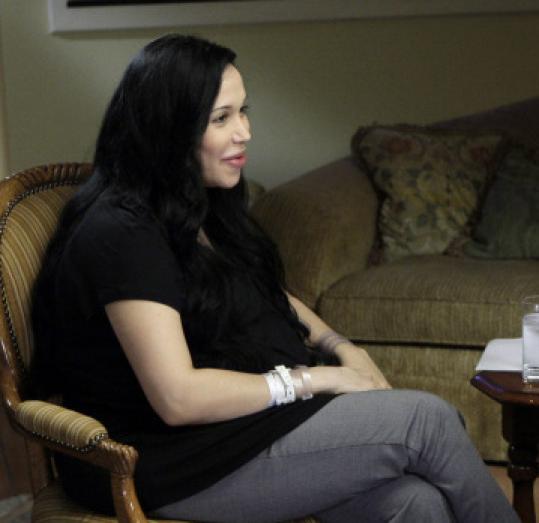 Nadya Suleman is the troubling face of assisted reproduction. She is something of a caricature of a single mother by choice.
By Peter Canellos Globe Staff / March 3, 2009
Text size – +

"Octo-mom" Nadya Suleman has managed the rare feat of getting the American people to think of something other than their declining economic fortunes.

Already a single mother of six, Suleman underwent in vitro fertilization and, on Jan. 26, gave birth to eight more children, all underweight and in danger of lifelong health problems. To make their future even cloudier, Suleman is unemployed and living on government assistance.

Her tabloid-fueled tale no doubt reached more people than a thousand bio-ethics reports, and, for many people, she is now the troubling face of assisted reproduction in this country.

But Suleman occupies a very strange position, straddling the fault lines in the emerging debate over whether and how to establish guidelines for in vitro fertilization techniques.

Having aggressively utilized fertility technology to produce a very large family, she is something of a caricature of a single mother by choice - the type of independent woman whose decision to become a parent has sometimes raised the hackles of Dan Quayle-type conservatives. (In 1992, the then-vice president controversially criticized Murphy Brown, a TV sitcom character, for having a child out of wedlock.)

Suleman is also, alas, a caricature of the many socially conservative mothers who, out of concern for destroying potential life, ended up with larger families than they anticipated. Suleman has said that she wanted all her fertilized embryos to be implanted in her uterus because "they were lives."

This is, of course, a key point of dispute. In vitro fertilization combines the male sperm and female egg and implants some of the resulting embryos in a woman's uterus through a simple operation. But there are typically extra embryos that can remain frozen or used for medical research into stem-cell treatments for life-threatening diseases.

The question of whether such a frozen embryo is "life," without even being implanted in a womb, has been at the center of the debate over stem-cell research for more than a decade.

Since its inception in the late '70s, but especially as techniques improved greatly over the past two decades, in vitro fertilization has allowed millions of otherwise infertile couples - and some individuals utilizing donated sperm or eggs - to become parents.

As technology continues to improve, the procedure has the potential to extend a woman's "biological clock" by using her own frozen eggs to create embryos when she is past an age when conception is usually possible.

But while many nations have recognized a range of potential abuses of the technology and imposed regulations - Britain, for instance, has mandated that no more than two embryos be implanted in a woman, to prevent multiple births like Suleman's - Americans have been unable to reach any kind of consensus.

Many women fear that establishing even widely accepted limits on in vitro fertilization would open the door to more threatening restrictions on who can become a parent and under what circumstances. And many social conservatives are fearful that limiting the numbers of embryos that can be implanted will only result in more excess frozen embryos, by far the most troubling part of the procedure for religious conservatives.

The parameters of the debate on the right were visible on Fox News Channel recently, when key opinion-makers Bill O'Reilly and Laura Ingraham squared off. O'Reilly accepts in vitro procedures as fertility treatments, but wants a limit on the number of embryos implanted in mothers, to prevent Suleman-type situations. ("Who'll pay for this?" he thundered. "Chances are, the taxpayers.")

But Ingraham's contempt for Suleman extended to the whole culture of assisted reproduction.

"I called up a priest friend of mine. . . . [and] he said look, when you deny nature and you are in this mindset that it's our choice and our convenience, and we have to - man has to be able to control the reproductive process - this kind of stuff is going to happen," she said, according to the Fox transcript.

Meanwhile, Suleman, whose apparent obsession with actress Angelina Jolie has kept her in the tabloids beyond her initial burst of fame, hopes to raise money by publicizing her situation, confirming that cashing in is a far less controversial practice than assisted reproduction.

Peter S. Canellos is the Globe's Washington bureau chief. National Perspective is his weekly analysis of events in the capital and beyond. He can be reached at canellos@globe.com